Dozens of IDF reservists sprawled out on foam mattresses, watched news about a failed ceasefire while killing time by poking fun at each other.

By BEN HARTMAN
JULY 16, 2014 05:04
IDF RESERVISTS watch television in a Kiryat Gat community center as they wait for orders.
(photo credit: MARC ISRAEL SELLEM/THE JERUSALEM POST)
Advertisement
Whoever came up with the army phrase “hurry up and wait” probably had a place like the Kiryat Gat community center as it was on Tuesday in mind.Dozens of IDF reservists sprawled out on foam mattresses and watched the news about a failed ceasefire while slipping outside to smoke cigarettes and killing time by poking fun at each other. 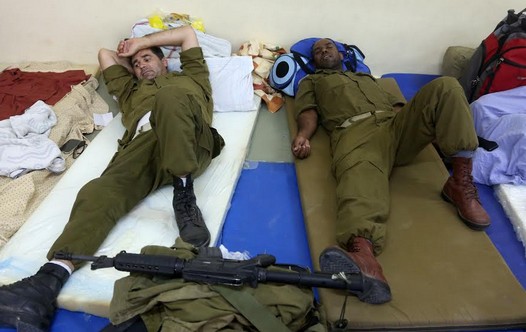 In staging areas closer to Gaza, elite reservists’ units prepared for a possible ground incursion.But for the guys from the infantry battalion in Kiryat Gat, it was a different story.One soldier, Yaron, said, “We’re about a level or so below those guys,” and that they had been called up eight days ago in order to replace regular IDF troops from the West Bank if they get sent to Gaza.“What’s stressful is the lack of action, the sitting around doing nothing day after day. Either send us in or let us go home already,” Yaron said, as a Kiryat Gat resident came in with a stack of pizzas for the soldiers.The pies were stacked next to half-eaten IDF boxed lunches and snack packs – all part of a never-ending stream of food being brought in by locals.“I’m gaining weight, that’s all I’m doing,” Yaron said, and started showing pictures on his phone of the meals brought in by locals, everything from couscous to schnitzel to pasta to sweets and junk food.The reservists – who asked not to be quoted by name and that their battalion not be named – are among the 40,000 or more called up last week, and as of Tuesday they had nowhere to go and no idea when they’ll be sent home.Yaron said they’re on hand to help keep the peace in Kiryat Gat and help with home front issues, even though, as one reservist said, in the entire eight days they’ve been in the city there have been only two Color Red rocket alarms there.Another reservist recounted the times they’d been called up in the past few years. Such as November 2012, during Pillar of Defense, when they were sent to Kiryat Malachi and elsewhere – only to return home after a week – and in 2009 during Cast Lead, when they spent weeks in the South, never leaving the home front.Outside, a cook from the battalion, whose services it seemed were not in high demand due to the free catering provided by locals, said he was against the cease-fire in a big way.When asked why, he said the whole thing (which by now had been violated hours earlier by Hamas) was one-sided and he assumed he’d be called up again during another round of heavy rocket fire and IDF air strikes in a couple years.An officer with the battalion, whose wife and children live in central Israel, described what he said was the irony of being called into the reservists to escape the fighting.“I used to feel that when I was called up to the reserves I was going off to war, now I feel that I’m running from the war. I feel that the real fighting is back home, where my wife and kids are running from the missiles, and I’m here,” he said.
Advertisement
Subscribe for our daily newsletter