By JPOST.COM STAFF, YAAKOV LAPPIN
JULY 30, 2014 09:10
A Hamas regional operations map recovered by the IDF in Gaza
(photo credit: IDF SPOKESMAN'S OFFICE)
Advertisement
The IDF killed over 20 terrorists and struck more than 200 targets from the air in the past 24 hours in Gaza. The targets included mosques which were being used by Hamas for military activities. One such mosque was used as a command center while another had been in use as an observation post to monitor IDF troop movements. That mosque was in close proximity to a children's playground. Troops destroyed three terror tunnels and discovered another containing large quantities of AK-47 assault rifles and grenades. A tank force operating in Gaza discovered a weapons cache inside a mosque, also on Tuesday overnight. The arsenal included a "Kornet" anti-tank missile launcher which was loaded and ready for use. Troops also found explosives and maps. 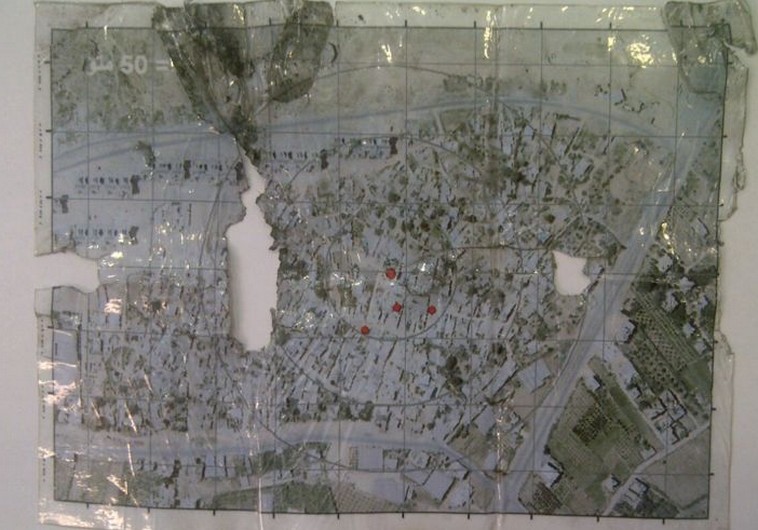 On Tuesday afternoon, a Givati infantry force opened fire on five terrorists who surfaced from a tunnel that led to a mosque. All five were killed in the IDF's fire. Hamas cells attempted to fire anti-tank
missiles at a tank from the 401st Armored Division, which returned fire.A total of nine terrorists were killed in exchanges of fire on Tuesday. The IDF reported two wounded.On Tuesday Israeli tank fire hit the fuel depot of the Gaza Strip’s only power plant, cutting electricity to Gaza City and many other parts of the Palestinian enclave of 1.8 million people.A thick column of black smoke rose from the facility, which supplies the territory with two-thirds of its energy needs.The fuel containers were left in flames.The IDF struck 135 Hamas and Islamic Jihad targets across Gaza on Tuesday as ground units continued to map out and destroy tunnels and clash with terrorist cells. It struck more than 70 targets overnight between Monday and Tuesday, including the home and offices of Ismail Haniyeh, head of Hamas’s political wing. Both buildings were used as a command center to manage terrorism, the IDF said.Four mosques used to store weapons, a terrorism tunnel and an underground rocket launcher located near another mosque were also attacked, the IDF said, adding that one of the four mosques also housed a tunnel shaft, while a second had been turned into a Hamas command and control center.Five soldiers were wounded inside Gaza on Tuesday by a Palestinian mortar attack. Two were airlifted to the Soroka University Medical Center in Beersheba, and three were taken by ambulance to the Barzilai Medical Center in Ashkelon.Earlier on Tuesday, the IDF announced that five soldiers had been killed in an attempted infiltration into Israel on Monday via a cross-border tunnel. The five died when attackers fired an antitank missile at the base of an IDF watch tower. Soldiers at the top of the tower shot and killed at least one terrorist who attempted to retrieve a dead soldier’s body.Dozens of rockets from Gaza were fired at various parts of Israel on Tuesday evening, including in the Tel Aviv metropolitan area. A rocket was fired at Beit Shemesh and rocket alert sirens wailed in the Jerusalem hills around 8:30 p.m. They were the first Color Red warnings for the area in recent days.Four rockets were intercepted over Beersheba and five more landed in open areas around the city after sirens blared there and in surrounding areas around 9:30 p.m. At approximately 10:15 p.m. sirens wailed in the Tel Aviv area, the Shfela area and in Ashdod.The Iron Dome defense system intercepted one rocket over greater Tel Aviv. Two more landed in open areas between Ashkelon and Ashdod.