'If we don't deal with this now, these threats will come to us,' senior Maglan unit member says

Operating behind enemy lines, unit has destroyed series of high-quality Hamas targets; Source: Hamas cells are abandoning their positions and have a low fighting spirit; Gazan homes have one area for family life, second area for rockets and tunnels/

By YAAKOV LAPPIN
Givati brigade in Gaza
(photo credit: IDF SPOKESMAN'S OFFICE)
Advertisement
Operating behind enemy lines in Gaza during the conflict with Hamas, the elite Maglan unit has attacked dozens of terrorists cells that fired on the IDF, destroyed areas used to launch rockets at Israel, and killed and injured 40 terrorists in recent days. 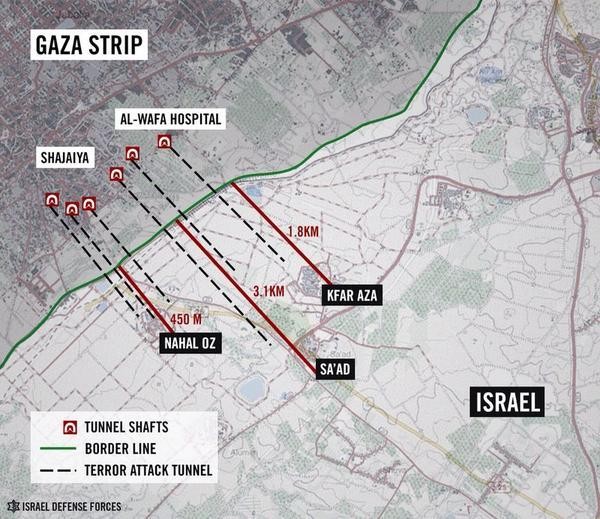 A senior source from the unit revealed that its members have targeted Hamas gunmen waiting in ambush for the IDF's Ground Forces, striking the threats right before Israeli forces pass by the ambushes. The Maglan unit has detected and destroyed Hamas posts and rocket launchers. It has detected a cross-border underground attack tunnel leading into Israel from Gaza, and found 20 bomb-laden, booby-trapped homes in Gaza. The unit also uncovered a very large quantity of weapons in raids. The source said the unit is operating in a heavily built-up area, characterized by residential buildings, orchards surrounded by buildings, and tunnels. Hamas has planted its military assets deep inside the very fabric of Gazan civilian life, he said. "Hamas operatives and area commanders, as well as their rocket cell members, keep one part of their home for normal family life. A second part of the home is the command center, or the start of a tunnel. Daily life and military infrastructure are totally interwoven," the source said. "This is the source of the complexity we face in our combat. We must overcome the challenge of differentiating between Hamas and the civilian population," he added. The Maglan unit is meeting the challenge, detecting a series of Hamas assets, he said. The source added that in recent days, a recognizable wave of demoralization has washed over Hamas's combat battalions. "They simply escape, leaving behind weapons and suicide bomb vests that were laid out for battle. This morning we stormed a position, and they just weren't there. I don't see a determined enemy. We have encountered stronger pockets of fighting in the past. But now, I would not give them a high grade for fighting spirit."Hamas built a network of tunnels that begin a few kilometers away from the Israeli border, and pass under the frontier, the source said, in a bid to enable dozens of terrorists to infiltrate the country. In response, the IDF has used a wide array of firepower and ground units to tackle the challenge, employing a rapid maneuver to "shatter the enemy and deny it freedom of operation in closed areas, where it is based," he stated. "We move in as quickly as possible, engage in close combat, and prevent the enemy from using its tunnels to enter our territory," the source said.  He recalled seizing large numbers of weapons, suicide bomb belts, and projectile launchers in recent raids."Hamas has turned tunnelling into a national profession. They lean on highly-skilled engineers to do this. We're dealing with all of these threats through close-range combat," the source added. Working with the Artillery Corps, the infantry brigades, and the air force, the source said the Maglan unit is helping to tear apart Hamas's infrastructure, describing the process as "peeling an onion, layer after layer."Hamas has built "defensive layers around the tunnels. They have attack positions in mosques, in the homes of operatives, and tunnels that allow terrorists to approach our forces," he said. "That requires very accurate and sometimes aggressive counter-measures by us. I know that all of the IDF's units are accomplishing this mission, even though there are casualties. We understand that if we do not deal with these threats, they will come to our home front. If you talk to members of our unit, it is clear to all of us that if we don't take care of this, if we don't destroy these threats and thwart them, they will reach us in a much more aggressive way, and they will harm Israeli civilians and soldiers."Additionally, the source said, it is "impossible" to demolish the threats via long-range firepower. Only a ground offensive that reaches the tunnel shafts can get the job done, he said. "This shows that despite intelligence, there is no alternative to getting there and destroying targets from up close," the source said. Hamas has adapted well to Israel's air power by going underground, but "it does not know how to deal with ground units that are storming its assets. We have the upper hand, and this is showing results," he added. "I have not entered one civilian home that did not have weapons, suicide belts, or booby traps in it," the source said. Any home found to be containing women and children leads to an immediate halt of the raid, he added. "We hold our fire, there's no question. We don't take chances with children and women. We allow them to leave, and then continue the raid. That's who we are, and this is the source of our strength," he added.