‘If you’re reading this, my (army) career is over,’ slain Golani fighter wrote

Bereaved mother helped families of slain soldiers, always knew the day would come when she'd get a knock on her door.

By BEN HARTMAN
Golani Brigade soldiers prepare to lower their comrade, St.-Sgt. Daniel Pomerantz, into his grave at Kfar Azar, near Ramat Gan.
(photo credit: BEN HARTMAN)
Advertisement
Over the years she spent caring for bereaved families in her IDF career, Colonel (ret.) Varda Pomerantz always knew the day would come when she'd get a knock on her door.“After I hung up my uniform after using up all my strength through the years of trying to comfort bereaved families, I have to stand here and tell everyone that I knew, I always knew that the day would come when those people in uniforms would come knock on our door. I never told you of this fear, but I always knew,” Pomerantz said, standing over the grave of her son, First Sergeant Daniel Pomerantz, 20, killed overnight Saturday in the Gaza Strip.Varda, the former head of the IDF's casualties branch, said she last spoke to her son on Friday night, and that “since I knew your hours and days were numbered, I decided to record the conversation.” 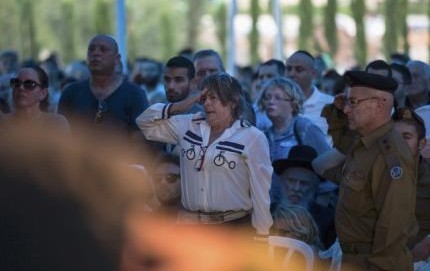 Then, standing before a shocked crowd, she played the recording. In the tape she tells her son to be strong, a mark of concern in her voice, and in her son's you can hear the confidence of 20-year-old fighter going off to war for the first time, a young man who sounds fearless because he's never been touched by fire.On second thought, maybe Daniel knew his time was running out. In the recording he tells his mom that he wrote a note to her and the family, and that its on his phone, but he doesn't want to read it right now, he'll leave it for when he gets back. Then, in a moment that finally broke whichever remaining mourners had not already bent over with sorrow, she read the note that was retrieved from Daniel's phone after the battle.“I'm so happy I was born to this family”, Daniel wrote, “If you're reading this, it means my career [in Golani] has come to an end. All of you must be happy, stay happy for me,” he finishes, after telling each of his brothers and his parents how much he loves them.Daniel was one of 8 Golani soldiers killed when an RPG hit their M-113 armored personnel carrier, a highly-vulnerable, aging model that was first put into service by the United States Armed Forces in the 1960s. Since Saturday night, the decision to send the soldiers into Gaza in a vehicle that has been deemed unsafe in the West Bank even, has been the source of controversy, and was mentioned by both Daniel's father Avi and his uncle Israel Nitzan, who said in his eulogy “Daniel, this was your first encounter with a battlefield, and you didn't have everything you needed.”Daniel's father Avi could barely make it through the mourner's kaddish for his son on Thursday evening, and during his eulogy he had to be held up by two of his surviving sons. His eulogy was a familiar one for bereaved fathers of IDF soldiers – crying out to a son who he can no longer talk to, a young troublemaker who became a man in the army and made his father proud, a fallen soldier whose death left his family shattered.Daniel was buried in a plot that was opened on the small moshav of Kfar Azar outside Ramat Gan specifically for him. There had never been a cemetery in the community, and the reason it took until Thursday to bury him was so that the local council could vote on approving the allocation of land for his burial. A representative of the moshav, Yair Kaplan, told Daniel that he would now join a group of 8 men from the moshav to die in the service of the state over the years, and finished by reading a few words from Elton John's track “Daniel”, saying “Daniel you're a star in the face of the sky”.A few meters away from the burial plot is the moshav's branch of “Yad Labanim”. On the wall inside are the faded black and white photos of 8 fallen soldiers from the community, and as the sun set locals filed in to see where Daniel's picture would soon hang.One elderly woman pointed out the picture of a man named Zvika, saying “Zvika, you have a new friend now. A friend of your grandson is now joining you.”She walked off, shaking her head and saying “grandparents are not supposed to bury their grandchildren.”