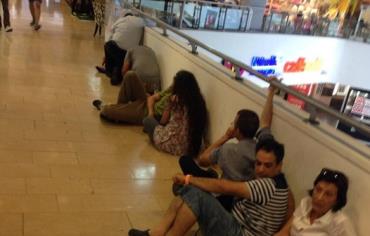 People at Dizengoff Center waiting for the all clear
People at Dizengoff Center waiting for the all clear Photo: NIV ELIS Several rockets from the Gaza Strip were fired toward the greater Tel Aviv area on Friday morning. The Iron Dome defense system intercepted three projectiles.Air raid sirens sounded in Tel Aviv and surrounding cities in central Israel warning of the attack.No injuries or damage were immediately reported. Hamas claimed that it had attempted to target Ben-Gurion Airport in the strike. Incoming air traffic was halted from entering Israeli air space as sirens were sounded in the area, an airport spokesperson told The Jerusalem Post. Flight traffic was resumed as normal after the sirens subsided.  Earlier on Friday, a barrage of rocket fire targeted southern Israeli cities, with a rocket launched from Gaza hit a fuel tank near a gas station in Ashdod, causing severe damage and a fire. One person was critically injured by the strike, while seven other Israelis were lightly injured, according to Magen David Adom. The three were taken to the Kaplan Medical Center in Rehovot. The seriously injured man in his 60s suffered injuries to his limbs from shrapnel.Emergency rescue units were searching for more injured people at the scene. Firefighters were also at the scene working to control a fire that broke out after the attack.Another rocket towards Ashdod was intercepted by the Iron Dome. Following the strike, the Israel Air Force struck a Gaza rocket launcher the military said was used in the attack on Ashdod.The strike on the South came after one rocket was fired from Lebanon on Friday morning on a village in the Upper Galilee. There were no injuries in the attack.Artillery fire was directed at the area from which the rocket was fired, a senior army source said.Over the past 24 hours, the IDF hit 81 underground rocket launchers, 21 command and control centers, 15 attack tunnels, and ten training centers. Seven Hamas regime buildings were also hit. Since the start of the operation, the IDF has struck 600 underground rocket launchers, 95 command and control centers, 61 underground tunnels, and 22 regime buildings.The IDF struck 1,100 targets belonging to Hamas and other terror groups in the Gaza Strip since the start of an operation launched Monday to end Gazan rocket attacks, and 210 targets over the past 24 hours, a senior security source said. Fifty targets belonging to terror organizations were destroyed overnight between Thursday and Friday.