Hundreds of protesters, prevented by police from approaching the building, also demanded the government shut the Israeli embassy and scrap Jordan's peace treaty with Jewish state. 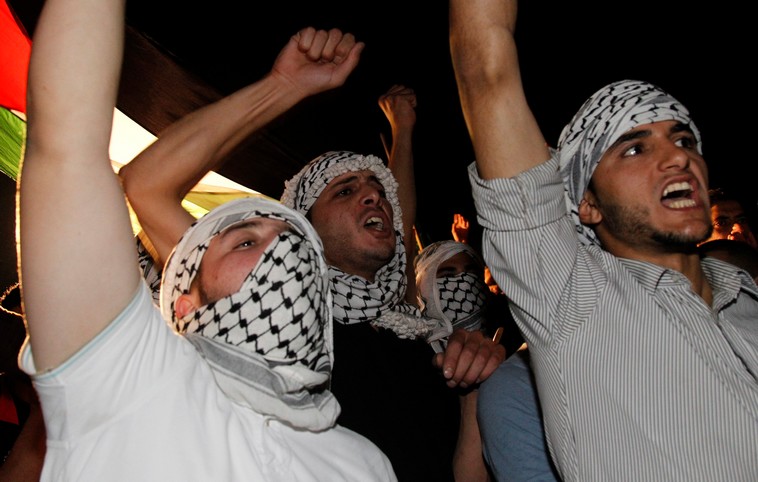 Hundreds of mainly Islamist Jordanian protesters burnt Israeli flags in Amman on Sunday as demonstrators called on Palestinian Hamas militants to step up rocket attacks against Israeli towns and cities to avenge civilian deaths caused by Israel's offensive in Gaza.Demonstrators near the Israeli embassy in Amman's affluent Rabia district chanted "Death to Israel" in one of the biggest public outpourings of anger against Israel in the last few years.
Hundreds of mosques in Jordan held prayers for those killed, and protesters chanting slogans backing Hamas urged a jihad (holy struggle) in smaller marches in Amman and in cities and refugee camps across the kingdom."O Hamas... Your rockets have raised our heads... hit again and again Ashkelon and Tel Aviv," angry youths carrying a large Palestinian flag shouted."O Hamas, you are the gun and we are your bullets," chanted a dozen bearded Islamist youths wearing green headbands of the Qassam Brigades, the armed wing of Hamas.Sheikh Hammam Saed, the head of Jordan's Muslim Brotherhood, the country's largest political party and a bastion of opposition to the kingdom's pro-Western policies, lambasted Arab leaders for failing to lend support to Hamas.The Islamist leader also slammed Egyptian President Abdel Fattah al-Sisi, for whom Hamas is a security threat because it is an offshoot of the Muslim Brotherhood, for effectively closing the border crossing with Gaza. He said hampering the entry of essential aid was inhumane and leading to the suffering of thousands of civilians."These Arab regimes have made us accustomed to taste the bitterness of defeat and now the day has come that someone (Hamas) has ended this humiliation and weakness by their heroic resistance," Saed told the protesters.Demonstrators also saluted Turkey's Prime Minister Tayyip Erdogan, a vocal supporter of Hamas, who has ratcheted up his rhetoric against Israel and criticised the United States and the rest of the world for failing to intervene.Hundreds of protesters, who were prevented by a heavy cordon of riot police from approaching the building, also demanded the government shut the Israeli embassy and scrap Jordan's peace treaty with the Jewish state.