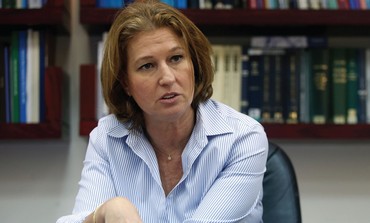 Justice Minister Tzipi Livni dismissed on Tuesday the possibility of an imminent halt in fighting between Israel and Hamas in Gaza, adding that the IDF ground incursion in the Strip was impossible to avoid. "There is no real option for a cease-fire now. This operation is unavoidable," the left-wing minister told Army Radio."Hamas is not close to a cease-fire in terms of its conditions," she added. "Its [Hamas's] conditions are not conditions that are accepted - not by us, not by the Egyptians, not by the Americans, not by the Palestinian Authority and I'm certain that Israel will not agree." Palestinian media earlier on Tuesday reported on a rumored five-hour humanitarian cease-fire to take effect in the morning that apparently held no ground as rocket fire from Gaza continued to target Israel after a purported 10 a.m. start time. Israeli officials rejected reports of the temporary halt in fighting, while the radio station reported that Israel, due to security considerations, rejected a UN request for a temporary, humanitarian halt in fighting. Meanwhile on Tuesday, US Secretary of State John Kerry met with Egyptian Foreign Minister Sameh Shukri in Cairo for talks aimed at ending the 15-day-old Gaza crisis. Dispatched by US President Barack Obama to the Middle East to seek a cease-fire, Kerry thanked Egyptian President Abdel Fattah al-Sisi and Shukri for an Egyptian truce proposal between Israel and Hamas."And I look forward to a good conversation to talk about how we can build on it and hopefully find, not only a way to a cease-fire, but a way to deal with the underlying issues which are very complicated, so I'm very grateful to my friend for his efforts," Kerry said on Tuesday.Shukri said that he appreciated the efforts of the United States and its decision to send Kerry to Cairo to try and help resolve the crisis."We are hopeful that this visit will result in a cease-fire that provides the necessary security for the Palestinian people and we can commence to address the medium and long-term issues related to Gaza," the Egyptian FM added.Egypt was key to securing an end to a previous bout of Gaza fighting in 2012, but the country's new leadership is openly hostile to Hamas, potentially complicating the negotiations.According to Gaza health officials almost 550 Palestinians have died in Gaza fighting, including nearly 100 children and many other civilians, as Israel has pursued an air and ground operation to stop rocket attacks on its territory from the Hamas-dominated Gaza Strip.Israel's casualties also mounted, with the military announcing the deaths of two more soldiers, bringing the number of army fatalities to 27 - almost three times as many as were killed in the last ground invasion of Gaza in a 2008-2009 war.Two Israeli civilians have also been killed by Palestinian rocket fire into Israel.Kerry arrived in Cairo on Monday and, during talks with United Nations Secretary-General Ban Ki-moon, said the United States would provide $47 million in humanitarian aid for Gaza.