Netivot woman: We were saved by a miracle

The rocket exploded mid-air above a pre-nursery on the kibbutz and struck a short distance away from the building.

By TOVAH LAZAROFF
JULY 11, 2014 09:57
STRUCTURAL DAMAGE to a wall can be seen after a Hamas rocket struck it yesterday in Netivot
(photo credit: TOVAH LAZAROFF)
Advertisement
Only now, hours later, has Malkia Nachum started to tremble at Thursday morning’s close call, when a rocket sailed over her Netivot home and lodged in the exterior stone wall on the edge of her back patio.“I know that we were saved by a miracle, and not just any miracle, a big miracle,” she said as she at on her front patio unfazed by the summer sun.She had just finished explaining to the police how the morning events unfolded and the damage the rocket caused to her yard. 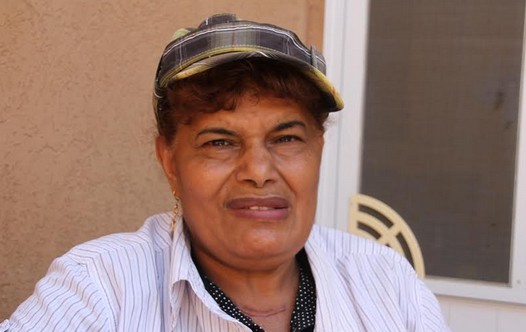 Malka Nachum outside her Netivot home.
Pausing to drink juice, she repeated the story for The Jerusalem Post. Her hair was pulled back in a cap. Her two small grandchildren played by her feet and at times, the girls, ages four and five, climbed into her lap as she spoke.At 9 a.m. there was a warning siren that sent her family racing for the safe room, Nachum said.The only one who stayed in the house was her 22-year-old son, who was in the shower.“We heard a loud noise, so strong that we felt that ground move. Our bodies shook from the impact,” she said.“I felt that it was close,” she said, but it never occurred to her that it had hit just outside.After waiting for a bit, she left the protected room and immediately smelled smoke.“I thought it [the rocket] had fallen in the neighborhood. I called my brother and the police. I said there is a smell of smoke, and I do not know where it comes from,” Nachum recalled.But it was her son, who saw where the rocket landed from the bathroom window.Immediately her 21-year old daughter started to shake. Later, she was treated for shock.“But only now am I feeling it,” Nachum said.Normally at that time in the morning, she said, she would have five small children in the pre-nursery school that she runs out of her home.In the side yard, the toys were all neatly lined up on a green plastic grass tarp, including blue plastic rocking horses and red and yellow wheel barrows.But on Tuesday, she closed the pre-nursery until the end of the war with Gaza, following municipal orders.On Monday, the day before it closed, a warning siren rang out just as the five small children were sleeping.“They screamed and cried as we brought them to the protected room,” Nachum said.Now as she sits outside her home, she imagines the worst – how the rocket could have hurt the children, or how it could have split her home in two.“It came so close to doing that,” she said.The explosion took her back decades, to when she was 18 and ammunition exploded in a shed while her 13-year-old brother was inside.“I saw him burning. He died three weeks later,” she said. “I can still hear the sound of that explosion in my ear.”Now, she said, she is reliving both the morning’s experience and the trauma of her brother’s death so many years ago.Hers was not the only miracle of the day.In a kibbutz on the Gaza border, Orly Schuster was with her husband in the supermarket at 5:30 p.m. when a warning siren rang out.“We ran out to the nearby shelter, but the rocket exploded before we could make it there,” she said.As they stood outside the supermarket, they saw smoke rising and there was a strong smell of something burning, she recalled.The rocket exploded mid-air above a pre-nursery on the kibbutz and struck a short distance away from the building.Luckily, she said, the pre-nursery had ended its day at 4 p.m., just an hour-and-a-half earlier, and the area was empty.“I do not want to think what would have happened if it had been earlier in the day,” Schuster said.
Advertisement
Subscribe for our daily newsletter