On patrol with the Israel Navy off the Gaza Coast

“We have been busy,” a navy source says, “and we are prepared for the next stage of the fighting.”

By YAAKOV LAPPIN
Navy patrols off the coast of Gaza
(photo credit: YAAKOV LAPPIN)
Advertisement
The Shaldag-class fast patrol boat sped through the bright, blue waters of the Mediterranean Sea, a few kilometers off Gaza’s northern coast, as white plumes of smoke from among buildings in the Strip rose into the sky, a remnant of IAF air strikes several hours earlier.The Israel Navy took journalists on a patrol off the coast Monday, during a lull in the conflict with Hamas. Despite the respite, navy sources stressed “no one here is confused by the lull. We are prepared for the next stage in the operation.”The navy’s missile boats and fast patrol boats have played a key role in assisting IDF ground forces that entered Gaza, providing them with close support.The vessels share a command and control system with battalion and company commanders on the ground.This enables them to fire sea-to- surface guided missiles at enemy targets that threaten ground forces, share real-time intelligence and integrate fully into operations underway in the Strip.Meanwhile, elite naval commando units, such as Shayetet 13, have gone deep into Gaza to destroy rocket launch zones and raid terrorist cells, as well.Hamas has fired projectiles on the vessels from the coast, but failed to hit them.Lt.-Cmdr. Guy, a naval officer who is coordinating the navy’s role in Operation Protective Edge, said cooperation with the ground forces during the current conflict is unprecedented.“We are in direct contact with them, meaning we take part in shooter-to-censor cycles [in which the IDF fires on targets detected by sensors], and we keep a lookout from here,” he said.In one recent case, a navy vessel spotted terrorists firing mortars at soldiers, and directed a precision-guided missile at the cell, killing its members. 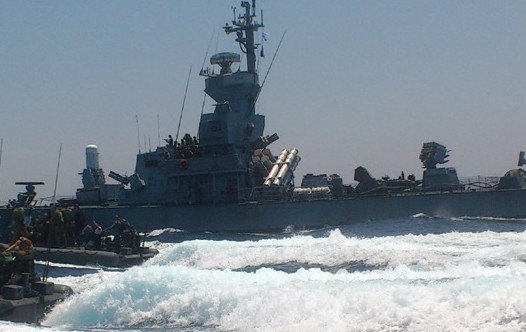 The Shaldag boat has also fired its typhoon weapon station, which has a 25 mm gun, located on the boat’s bow.“This is a northern Gazan neighborhood that is filled with Hamas operatives,” a second officer on board the boat said, pointing towards the coast. “We have fired a lot in this area.”The navy also attacked Hamas’s naval police headquarters, which also doubles up as a center for organizing attacks on Israeli naval boats, according to IDF intelligence.“We have been busy,” an additional navy source said. “And we are prepared for the next stage of the fighting.”
Advertisement
Subscribe for our daily newsletter