By BEN HARTMAN
JULY 22, 2014 13:52
Rocket damages Yehud home.
(photo credit: ZAHI DUGATCH)
Advertisement
A rocket struck the backyard of a house in Yehud on Tuesday morning, causing major damage in the first direct hit in the Tel Aviv metropolitan area since Operation Protective Edge began on July 8.One woman was lightly hurt in the strike and another was treated for shock. The rocket landed in the yard between two houses, completely destroying a metal storehouse and leaving a deep crater in the ground.Oz, a neighbor who lives across the street, said that the building shook from the explosion and in the apartment above him a young man went into shock and a pregnant woman began going into labor after the blast. 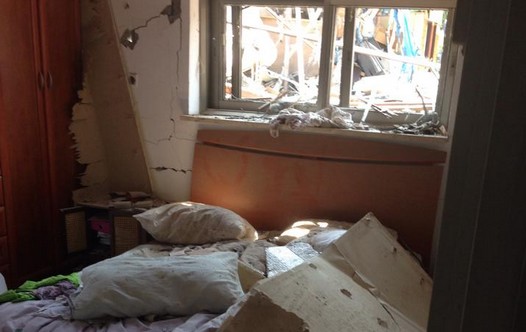 Similarly to an incident last week, when a large chunk of shrapnel crashed through the roof a house in the Tel Aviv area, this strike was also in a run-down neighborhood of dilapidated houses.One resident said people in the buildings have hallways to run to, and that the rest go to public shelters because the houses lack protected areas and have fragile roofs.“These are old Arab-style houses, they aren’t safe,” he said. 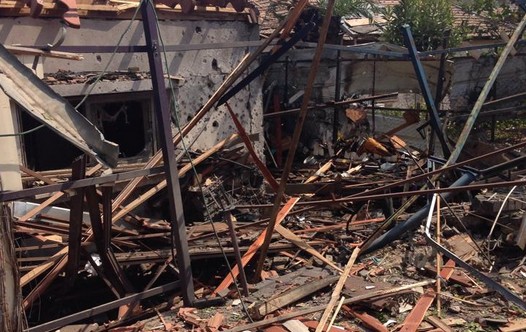 Col. Effi Mishov, the commander of the Dan district in the Home Front Command, said the incident reinforced the importance of following safety protocol.“We always say that we treat every rocket as though there will be an impact. The Iron Dome is a great answer to the threat, but it is not 100 percent effective,” he said.Across the street, a crowd of locals huddled in front of the cameras of the Israeli and foreign press, calling for Prime Minister Binyamin Netanyahu to “erase Gaza,” with one resident saying “don’t be a woman, Bibi, get rid of Gaza. Just like they don’t want the Jews here, we don’t want Arabs either.”Dor, a 24-year-old resident of the neighborhood, struck a different tone.“These are innocent civilians that they’re targeting here with the rockets. We’re not trying to attack Palestinians, we’re not looking for war, we’re fighting terrorists. Rockets don’t differentiate between religion or race,” he said.
Advertisement
Subscribe for our daily newsletter