Barrage of rockets fired from Gaza toward central Israel; one projectile hits near residential building in Kiryat Gat, moderately-to-seriously injuring 1 person and lightly wounding 2 others; shrapnel falls in Tel Aviv.

By JPOST.COM STAFF, YAAKOV LAPPIN
JULY 31, 2014 18:13
An interception of a rocket by the Iron Dome.
(photo credit: REUTERS)
Advertisement

Video courtesy Israel Police
Rocket fire towards central Israel's major population centers resumed on Thursday, setting off sirens in the greater Tel Aviv area and sending local residents running for shelter.Sirens sounded in Tel Aviv and the surrounding communities, as well as in the South. A rocket struck near a residential building in Kiryat Gat, moderately-to-seriously wounding a man in his thirties. He was transported to Barzilai Medical Center in Ashkelon for treatment. A teenage girl and a 60-year-old man were lightly hurt in the attack. 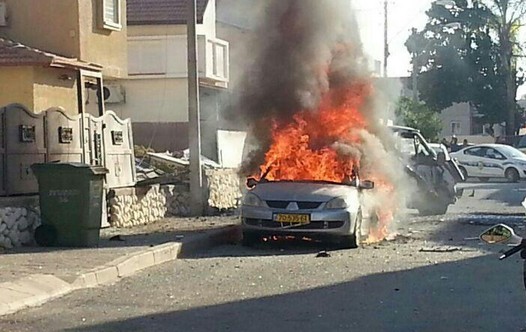 The Iron Dome intercepted one rocket fired toward the greater Tel Aviv area, according to the IDF. Police were searching for rocket shrapnel that is believed to have fallen in the cityRockets were fired from Gaza toward Israel throughout the day on Thursday, targeting the communities surrounding the Gaza Strip, as well as the Ashkelon area repeatedly.There were no reports of injuries in the earlier attacks.The IDF called up 16,000 reserves on Wednesday night, and the soldiers were deployed to positions on Thursday. A total of 86,000 reservists have been called up since the start of the war. Several clashes occurred between the IDF and Hamas overnight between Wednesday and Thursday. The Givati Brigade's Tzabar Battalion killed two terrorists in gun battles in southern Gaza early in the morning.A Golani infantry brigade unit saw a terrorist surfacing from a tunnel on Thursday morning, killing the gunman.Paratroopers identified five terrorists and dispatched an air force craft, which struck the suspects, killing them.The IDF is examining a number of shafts found in Gaza to see if they are connected to new tunnels, or to underground passages that the army already knows about.The IDF destroyed several tunnels in the past 24 hours, a senior IDF source said Thursday morning.The air force is continuing to strike Hamas and Islamic Jihad targets, based on newly arrived intelligence, some of which comes from ground forces inside Gaza. It destroyed 110 targets in the past 24 hours, the army source said, and 4,200 targets since the start of hostilities.
Advertisement
Subscribe for our daily newsletter