Soldier who had formerly been feared kidnapped by Hamas laid to rest in Kfar Saba after being declared killed in action.

By BEN HARTMAN
Sec.-Lt. Hadar Goldin.
(photo credit: Courtesy)
Advertisement
Though in the hours after his death he was ruled missing, his fate unknown and his whereabouts a mystery, on Sunday afternoon in Kfar Saba, Lt. Hadar Goldin, 23, of the Givati Brigade, was buried at the military section of the cemetery in the presence of thousands of Israelis, in a funeral befitting a beloved officer.The officer from Givati’s reconnaissance unit was spoken of in a way that bore a contrast of sorts – on the one hand a brother, son and fiancé who was constantly smiling, and on the other hand a fighter who fought with ferocity and bravery when sent to war.His father, Simcha Goldin, said it was hard to mourn a young man like Hadar who possessed a beaming smile that all of Israel came to know from the news reports since he went missing in a fight in southern Gaza, where he was killed along with two other soldiers Friday morning. 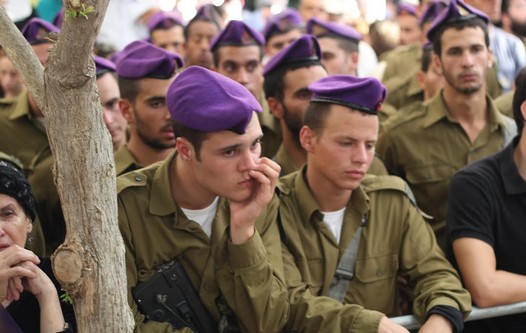 funeral
Hadar, his father said, always wanted to bring tikkun (“repair”) to the world.“He was a great young man, just like all the other ones we [Israel] have buried recently,” his father said.Hadar’s twin brother, Tzur, talked about how their lives were and remain intertwined.“The happiness in our house won’t be extinguished. Your dreams came true in your life, and they will continue to come true after your death,” he said.In the next few months Hadar was set to marry to his fiancée, Edna, and his family was working on wedding preparations when they received the news Friday that he was missing in action.Embraced by Hadar’s mother, Hedva, Edna said she didn’t know where to start, what to say about a man she was so proud to know, an officer admired by his soldiers, a loving son and brother beloved by his family.She talked about how much everyone will miss him, how things won’t be the same without him.But “if you want us to live, we will, and give us the strength to make you happy,” she said.She also vowed that he will live on as a part of her life and that “everyone I meet will know you; you will walk with me hand in hand.”Hadar had been listed as missing in action and feared kidnapped since Friday, but late Saturday night Brig.-Gen. Rabbi Rafi Peretz, IDF chief rabbi, ruled that Goldin had been killed in action, due to findings from the scene and Halachic rulings, the IDF said Sunday.They gave no further details about how the decision was made to rule him dead and fit for burial.On Sunday, Defense Minister Moshe Ya’alon tweeted that Goldin was a relative of his and he had known him since he was born. He did not give further details on the family connection between the two, which was censored for publication until Goldin was ruled dead.On Saturday night, Goldin’s family told reporters gathered outside their Kfar Saba home that they were fiercely opposed to any IDF withdrawal from Gaza that did not include the return of their son. They also expressed confidence that he was still alive.The next morning, after there was no longer any way to deny the tragedy, Goldin’s father called for Israelis to attend the funeral, to give his son a fitting farewell. The call was heeded by what looked like more that 10,000 people, spanning across the cemetery and the surrounding streets. The funeral was one of many recent soldier funerals that have become mass events, as strangers flocked in the thousands to bid farewell to young men they didn’t know.One of those who came was Arik Kasten, 49, from Beit Hanan near Ness Ziona, himself the father of a Golani soldier sent in a supporting role to the front line.He said he’d been to the funeral of another soldier he didn’t know, one that was held earlier in the operation, in Rehovot, and that like other well-wishers, he felt a duty to come.“I feel I owe him; he gave his life for me. All I gave was two hours of my time.”