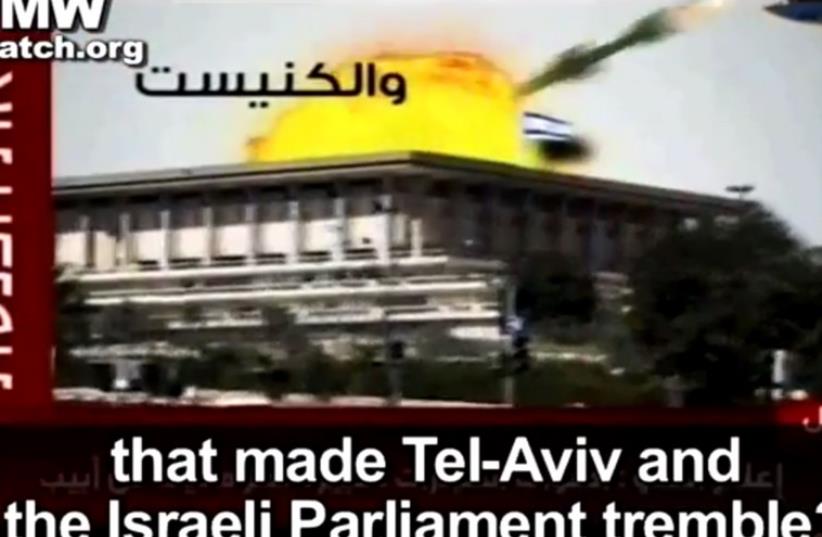 Hamas propaganda video
(photo credit: screenshot)
Advertisement
Hamas has taken to the Hebrew language in its latest effort at psychological warfare. Palestinian Media Watch on Thursday posted a video of a broadcast on Hamas' Al-Aqsa television station from Wednesday which feature threats against Israelis in Hebrew."Zionists, wait and see stabbing attacks everywhere. Wait for suicide attacks on every bus, café and street. Wait for the rage and for revenge for Gaza, wait for the flames of the West Bank and inside you [Israel]," the broadcast threatens.The propaganda video was released as the IDF was carrying out Operation Protective Edge in Gaza aimed at halting rocket fire on Israeli communities."Zionists, do you still remember the rockets that made Tel-Aviv and the Israeli Parliament tremble? We just wanted to tell you that we have thousands of them," the voice in Hebrew warns."Zionists, [we] can reach you above ground and below it. So start counting the number of coffins you'll need in these months."Hamas has released a number of propaganda videos on Youtube since the Gaza operation began, threatening longer, more powerful rockets."Zionists, the resistance has many goals, it has the ability to reach places you thought were safe. Look, they [the rockets] are on their way to you nowand will reach you soon."