When the firepower grows does the law fall by the wayside?

IDF says its calls for evacuations from Gaza are not meant to free it from laws of armed conflict. 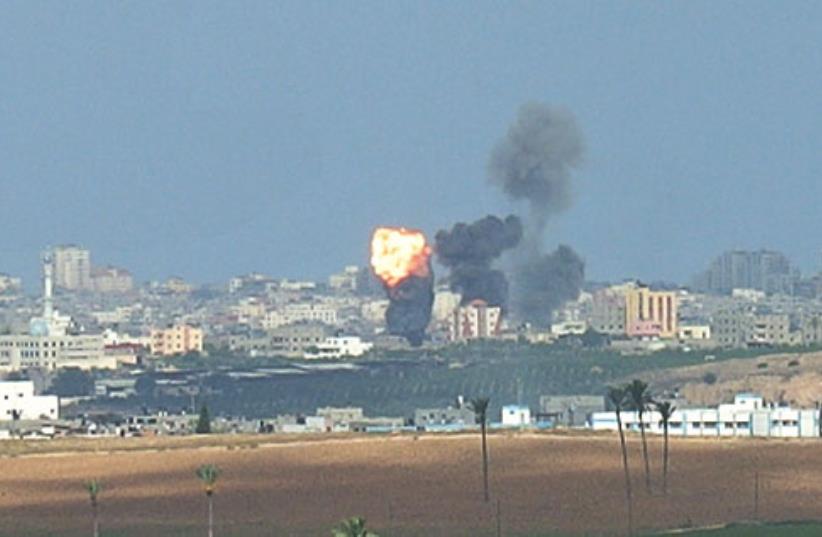 Explosion in Gaza Strip Beit Hanoun
(photo credit: SETH J. FRANTZMAN)
Advertisement
As in past wars, the IDF is taking increased criticism for the rising total of civilian casualties in Operation Protective Edge, now up to its sixth day.The unflattering coverage of the early days in which the IDF was targeting Hamas and Islamic Jihad terrorists in their homes, in some cases leading to civilian deaths, has been augmented by even less flattering results from attacks on mosques, and most recently a reported attack on a care center for disabled people.Reportedly in the case of one of the mosques, the mosque was not the target, and civilians were killed when they came out of it at the wrong moment when a target next door to the mosque was hit.Regarding the disabled persons’ care center, the IDF has no official response yet other than that it is reviewing the incident.Such IDF responses sometimes are replaced with more comprehensive justifications, but often an initial answer of “under review” could mean an error was made, which reportedly occurred already with at least one bombing of a residence.All of this is brought into further contrast in light of the IDF’s calling for whole areas of northern Gaza to evacuate – leading some to speculate that it is preparing to flatten certain areas where the density of Hamas weapons and fighters is highest.The Jerusalem Post has learned that while in the near future the intensity of the IDF’s air strikes on portions of northern Gaza may greatly escalate, the IDF’s call for a general evacuation was not meant in any way to free it from following the laws of armed conflict to which it views itself as bound.Even as reports of thousands of northern Gazans evacuating the designated area have come out, the IDF’s intent is to continue to review the situation on the ground regarding civilians and to analyze the legality of each attack individually.For example, even as thousands of civilians have left and the IDF may use far more firepower to attack the densest areas of Hamas capabilities, the IDF will review the proportionality of each attack – whether the expected military advantage sufficiently outweighs the potential civilian casualties – individually, and not merely once as a general calculation.Also, the reason the IDF has called for a general evacuation is not merely to level an entire area, though worrying less about harming civilians certainly allows military commanders some more freedom of action.Rather, it also comes with the approach that if there are no or fewer civilians nearby, then it is easier to determine who and where adversaries are, possibly allowing to unleash firepower in a more targeted fashion against such combatants.Errors likely have been made and likely will continue to be made in the imperfect fog of war.But a July 11 IDF blog post has offered substantial photographic evidence that it is trying to only hit targets that have a military use, including targets that might normally be defined as civilian, and that it is trying to warn and evacuate civilians from harm.With the operation expected to enter an even more intense phase and the rising criticism of many who do not accept the IDF’s characterizing of dual-use locations as military targets, the challenge to the IDF’s ability to effectively balance hitting Hamas with observing the law will only increase.