Israel remembers the horror of 9/11

Fifteen years has gone by and the pain of that loss never goes away; we just learn to live with it a little better; and we learn to keep living. 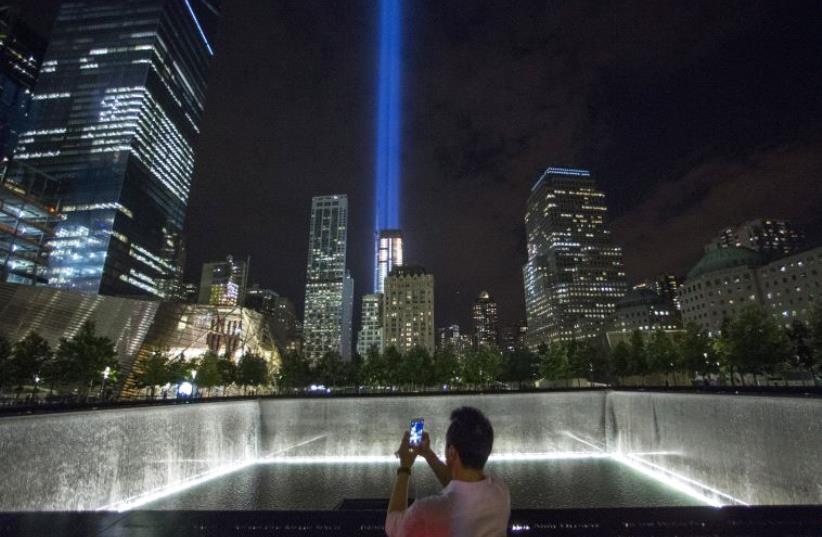 A man takes a photo at the 9/11 Memorial and Museum near the Tribute in Light in Lower Manhattan, New York
(photo credit: REUTERS)
Advertisement
There are some days that never go away.For older Americans it might be the attack on Pearl Harbor, or the assassination of president John F. Kennedy. For Israelis, it might be Yom Kippur 1973, or the assassination of Yitzhak Rabin on November 4, 1995.But the entire world remembers the shock and the unbearable sadness of September 11, 2001. The recollection of the moment is still as raw and painful as the day itself.Nowhere else in the world was that act of terrorism better understood than here in Israel. Jews have been the targets of Islamic terrorism since before the state was founded in 1948. That is why the sadness of 9/11 was so overwhelming in Israel. That is why Israelis grieved for their friends and brethren in America.That is why Israelis still grieve.And that is why there is a memorial to the victims of that hateful crime in Jerusalem. The 9/11 Memorial, sponsored by the Jewish National Fund, is the only 9/11 memorial outside the United States with names of all 2,996 victims.Some of these names come from countries that have no diplomatic relations with Israel – nations whose citizens are not even permitted to associate with Israelis, as we saw recently at the Olympic games in Rio. But their names are all there, listed at the memorial. Everyone is remembered, no matter their country of origin, no matter their religion, no matter what the color of their skin is. They are all the same – fathers, mothers, brothers and sister, husbands and wives.That’s because Israel recognizes all people as human beings, no matter what their governments say and do.And that gets to the heart of why the 9/11 Memorial is in Jerusalem. Nowhere else is there a place, and a people, who understand the pain and loss felt 15 years ago in the United States.Israel understands the shared values of democracy, freedom, pain and loss.Israel shares the courage demonstrated throughout the US on that terrible day.And Israel has the courage – in spite of the hatred of its enemies – to pursue peace.Fifteen years has gone by and the pain of that loss never goes away. We just learn to live with it a little better. And we learn to keep living.Supreme Court Justice Louis Brandeis once said that America’s founding fathers recognized that the secret to happiness came from freedom, and the secret to freedom came from courage.On September 11, 2001, the world witnessed a courage that has never been forgotten: the selfless courage where people ran into the fire to help save others.They were not thinking of their own families or their own lives. These heroic first responders climbed the steps of the World Trade Center while everyone else was climbing down. Employees at the Pentagon, where I once worked as president Ronald Reagan’s deputy assistant secretary of defense, ran into the building to save others. And those brave souls on the last plane fought their attackers and saved others on the ground from death and destruction. All of these people saved others who they didn’t know and never would meet.Americans showed tremendous courage on that day 15 years ago. That is a courage that Israelis understand. It’s a courage that Israel has demonstrated every single day of its existence. And at the same time, there is always that hope for greater understanding between all people.The soul of a free people will always rise above hate. Liberty will always triumph because people fundamentally want to be free. And the Stars and Stripes of the US flag, along with the Star of David, will light the way for the entire world to follow.May the memory of all those names carved at Jerusalem’s 9/11 Memorial be remembered with, yes, sadness, but also with love and devotion. May their families be comforted. And may we all live to see a better world that will never experience that kind of hatred, and heartfelt sorrow, ever again.