A civil lawsuit under the Anti-Terrorism Act

Israelis rely on their government to retaliate against terrorism with force. Americans, however, are generally mere spectators to Middle East violence. 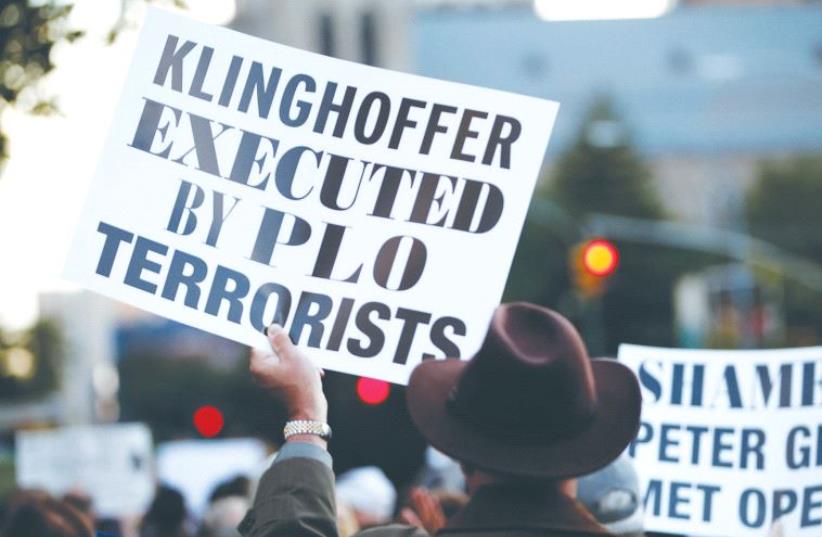 A PROTESTER holds up a sign condemning the Palestine Liberation Organization for the murder of Leon Klinghoffer
(photo credit: REUTERS)
Advertisement
Short of taking up terrorism to settle their scores and obtain the justice owed to them, what else are American victims of Palestinian terrorism to do when they are denied relief in their own courtrooms? Unless the US Supreme Court agrees to hear an appeal, the likelihood is that their day in court has ended bitterly, their prayers for relief silenced by the procedural niceties that give justice a bad name.Such was the situation 10 American families faced last week when a federal appeals court overturned a $655.5 million verdict against the PLO and Palestinian Authority for six terrorist attacks committed in Israel between 2002 and 2004.Israelis rely on their government to retaliate against terrorism with force. Americans, however, are generally mere spectators to Middle East violence. Occasionally while visiting Israel they find themselves in the right place, but disastrously at the wrong time. When that happens, Israeli reprisals are not proxies for American losses. Americans expect their own retribution. But the American government all too often placates rather than punishes Palestinians – tit for tat is Israel’s regional headache.Without other recourse, these Americans sought relief via a civil lawsuit under the Anti-Terrorism Act, which grants American casualties of international terrorism a legal forum in federal court. Ironically, the law owes its existence not to the terrorist attacks of September 11, 2001, but rather to Palestinian terrorism itself – specifically, the 1985 murder of Leon Klinghoffer on the cruise ship Achille Lauro.All throughout the seven-week trial, there was emotional testimony from the eight surviving victims. Courtroom proceedings, when conducted correctly, are great repositories of emotional catharsis.Monetary damages are not all that injured parties hope to receive when they place their faith in the law.After the evidence of machine-gun attacks and suicide bombings, the jury awarded treble damages to the American families.On appeal, however, the court, while acknowledging the horrific nature of the attacks ruled that there was no jurisdiction over this matter, since the connections between the defendants and the United States were insufficient to grant the court the authority to hear the case.The court reasoned that the attacks in Israel had not been “expressly aimed at the United States.” The shooters fired “indiscriminately and chose sites for their suicide bomb attacks that were ‘full of people,’ because they sought to kill ‘as many people as possible.’” Yet, as for the “people” the PLO had in mind, national origin was less important than ethnic makeup.All that mattered was that their victims were Jews.Wasn’t that similarly true in the murder of Leon Klinghoffer? He wasn’t tossed overboard while still in his wheelchair because he was an American. That he was an American was a bonus for his captors. He was targeted because he was Jewish. The fact that he was an American eventually gave rise to the enactment of an anti-terrorism law that, if it means anything, operates to protect Americans no matter where they fall victim to terrorism, or how.The court’s narrow interpretation of the statute is troubling and nonsensical. Should it apply only in cases of homegrown terrorism where the actors openly declare their enmity against the United States? Unfortunately, terrorism is not practiced quite that neatly, nor does it abide by conventional rules of warfare. In the gruesome game of international terror, chaos is king and grievances are for suckers.Suicide bombers detonate without knowing the nationality of everyone within range. Those who ram cars into crowded bus stops are not checking passports.Knife-wielding Palestinians sometimes unwittingly stab a tourist without ties to Israel, or even to Judaism. The dogs of war are mere puppies in the dirty business of terrorism, where civilian casualties are the unkindest cuts of all.Yet, not unlike the American debates over the Patriot Act, this ruling privileges constitutional due process over a more satisfying moral outcome where those responsible for atrocity are held to account.The Supreme Court has written that “the Constitution is not a suicide pact” – meaning, too strict an adherence to its principles could end with the death of a nation. How ironic, then, that such a document should be exploited to serve the dark objectives of suicide bombers.In this case, procedural, jurisdictional rules protected terrorists from paying at least a monetary price for their crimes. Those who cause terrorism and scoff at the rule of law should not receive its benefits, and American citizens who come before their courts deserve better.The author is a novelist, essayist and a Distinguished Fellow at NYU School of Law. He is the author of, among other titles, The Myth of Moral Justice and Payback: The Case for Revenge.