A Dose of Nuance: Getting to ‘why’

Strangely, in the midst of all the Israel-teaching that we do, we hardly ever discuss why – and whether – the State of Israel really matters. 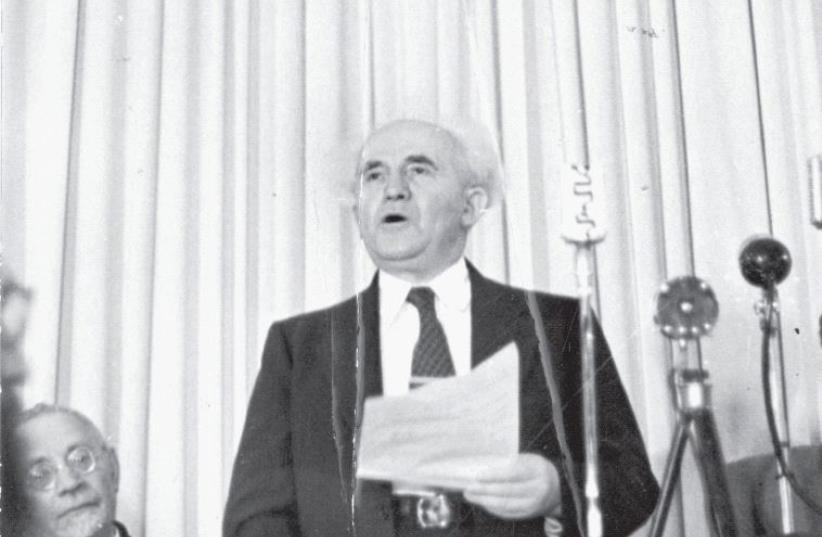 DA VID BEN-GURION declaraes Israel’s independence in Tel Aviv in 1948
(photo credit: FRED CSASZNIK)
Advertisement
The great irony about the “Israel conversation” today is this: Israel is the only subject that engages the passions of Jews across the denominational and political spectra, but is also the only subject that, because of its toxicity, we can no longer discuss. What we can discuss no longer engages us; what does interest us is invariably so explosive that we increasingly have no desire to touch it.That few other issues engage us is the product, in part, of the fact that the Orthodox and non-Orthodox worlds have gone their separate ways to such an extent that what used to exercise us no longer does.Take conversion, where just decades ago, the question of whether Orthodox rabbis would recognize halachically performed Conservative and even Reform conversions exercised many. Particularly in the Conservative community, traditional rabbis bristled at the fact that their conversions, which they insisted followed Jewish law to the very letter, were rejected simply because they were Conservative rabbis. Today, when the Israeli rabbinate no longer accepts even many Orthodox conversions in the United States, Conservative rabbis are ironically less offended.Right-wing Orthodoxy, they say, has simply lost its mind. Who cares any more what they think? Such examples abound. But when it comes to Israel, we still do care. Yet we’re turning off an entire generation for whom the Israel conversation has become confrontational and – since there’s not much most of us can do to affect policy – an exercise in futility.Is there anything we can do to shift the focus – and thus the tone – of the conversation before we end up shutting this one down, too? I think there is. Instead of seeking to get to yes, as in negotiations, perhaps the time has come to get to why.Instead of wondering how we can end the conflict, perhaps we should shift focus and ask why a Jewish state matters in the first place. If we leave aside theology (a form of discourse that matters to a very thin slice of the Jewish world), how are we to make a case for Israel? To be sure, the Jewish state is still a refuge for Jews, and, sadly, that refuge will be critical for years to come.Yet the cost of a Jewish state – in money, blood, angst and more – is huge. Do those of us who love it and devote our lives to it do so because it is a refuge for people who may someday need it? If we take out refuge (which though crucial, affects a relatively limited number of people) and theology (which speaks to a fraction of Jews), how might we make a case for Israel? What is the Jewish people seeking to achieve by having a sovereign state? The early Zionists were very interested in a refuge. From Bialik to Herzl to Nordau and Jabotinsky (among many others), they sensed that the Jewish future in Europe was going to be ugly, and intuited that only in a state of their own could the Jews defend themselves and shape their own future.Yet those early Zionists cared about much more than mere safety. They believed that if a new Jewish state could come to be, a new Jew would also emerge.Who would that Jew be? What would she stand for? How would she be educated? What values would she place at the center of society? About that, those Zionists disagreed passionately. On this, though, they agreed: As they imagined Jewish sovereignty restored, they also imagined the Jew recreated.Do the Jews have a purpose in today’s world? Millennia ago, we taught the world about monotheism, Shabbat, the evils of slavery, the notion that the rich could not harm the poor with impunity, society’s responsibility to widows and orphans. Yet what ideas are the Jews contributing to the world today? What is our 21st-century prophetic message that – if only it were heard – might constitute the Jewish people’s raison d’être? And what role does a Jewish state play in our shaping that message? Is the state our stage? Is it our laboratory? In what ways has the Jewish state already modeled ideas and behaviors from which the world could learn? In what ways must we continue to rethink what a sovereign Jewish state should be, if we are to justify the high cost that protecting it exacts from our people? Perhaps we should set aside settlements and borders, checkpoints and refugees – not because they are unimportant, but because our inability to shape policy is part of what leads to the vituperativeness of our discourse. If we were to do so, would we locate both a subject that could animate large swathes of the Jewish people, engage us in a conversation about why the Jewish people matters and, in the process, foster a conversation much less toxic than the one we have created? We have yet to try. Strangely, in the midst of all the Israel-teaching that we do, we hardly ever discuss why – and whether – the State of Israel really matters. Yet if we are to have any hope of a young generation of Jews wanting to have anything to do with the Jewish state, it is time to do what Jews have always done best. It is time to place front and center the question that matters most of all – the question of “why?

The writer is Koret distinguished fellow and chairman of the core curriculum at Jerusalem’s Shalem College. His new book, Israel: A Concise History of a Nation Reborn, is forthcoming on October 18 from Ecco/HarperCollins.
Advertisement
Subscribe for our daily newsletter