A dose of nuance: Time to step out of the mire of indecision

A leader who acts only when he has exhausted every possible evasion does not inspire passion and trust. 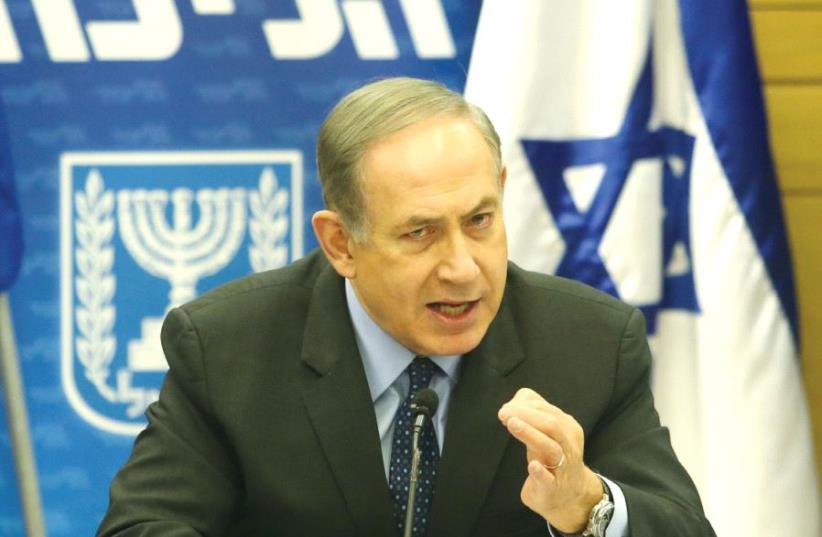 Benjamin Netanyahu
(photo credit: MARC ISRAEL SELLEM)
Advertisement
When we called our daughter on the phone, she was crying. “I can’t do anything but watch television,” she said. “And it’s so horrible to see what is happening.” We suggested she stop watching, but she refused.It was the summer of 2005, and we were on a family vacation in London. Because our daughter’s draft date was close, the army did not permit her to leave the country. So she stayed in Israel as we traveled, and thus found herself alone in the house one day, watching the disengagement from Gaza with unbearable dismay. She was hardly alone. All of Israel understood that prime minister Ariel Sharon’s decision was a momentous one. Even those who favored the move watched with horror as Jews, the finest of Zionism’s latest wave of builders, were now forced to abandon homes and towns that they had fashioned out of nothing.Last Thursday, I was in Tel Aviv for a meeting. With some time to kill, my colleague and I wandered through the nearby Sarona Market. The height of elegance, it was the European Tel Aviv. Dressed to the hilt, people ambled and shopped – in a city that the founders of Tel Aviv a century ago could never have imagined.Some 70 km. away as the crow flies, the residents of Amona had departed mostly peacefully, and now the synagogue was filled with young men, thugs essentially, who were battling the police. They drew swastikas on the walls, as if the police battling them were no better than Nazis (when in fact the police were Jews, doing their job to enforce the ruling of the mostly Jewish Supreme Court in the Jewish state). They spray-painted graffiti that read “Death to Zionists” and “Zionists, wait, your day will come.” In the process of ridding the synagogue of these thugs, dozens of officers were injured. Herded into police buses, these young Jews then gleefully smashed the windows.While we were sleeping, matters in this country have grown infinitely worse than they were in 2005. In 2005, Gush Katif was home to many more people than was Amona in 2017; but the 2005 disengagement proceeded mostly peacefully, while this week, that was hardly true. In 2005, those who departed Gush Katif were honorable and dignified; today, because the government has refused to take them on, the cancer of hilltop youth is spreading. (Imagine how Bibi would handle Arabs who did what these Jewish kids did.) In 2005, the prime minister led, while in 2017, Netanyahu acted only when he had exhausted every possible evasion. In 2005, Israelis watched with rapt attention; last week, shoppers in Sarona and most other Israelis simply went about their business.Israelis are simply tired. They protest neither in favor of the Supreme Court nor in support of the settlers of Amona. “Let the police deal with the loons,” they essentially say, refusing to recognize a weakened rule of law in Israel, an increasingly dismissive attitude to the Supreme Court, or the degree to which Israelis have grown used to a prime minister who governs by trying to do a little as possible.“We need to clarify our policy making, act with confidence, and decide… To continue in ambivalent, contradictory policy-making, is no longer an acceptable alternative. It is time to step out of the mire of indecision that has frustrated … policy over the last 20 years and that continues today.”Those words were written not by an Israeli, but by a Columbia College student named Neil Gorsuch, now a nominee for a seat on the American Supreme Court. That 19-year-old (writing then about American foreign policy) understood what our prime minister has yet to internalize – to govern by inaction is to sow the seeds of national failure.American Jews are also running out of patience. A leader of the US Federation movement told me this week that he and his colleagues warned the prime minister’s staff that they will not stand by if Netanyahu allows the haredi bill to undermine the agreement reached regarding the Kotel. I asked him what they could possibly do. They’re already working, he said, lining up members of Congress, long stalwart supporters of Israel, to start issuing scathing critiques. These men and women are the very core of Israel’s support in the American Jewish community, and Netanyahu’s governing by inaction is driving them away, too.Remember Netanyahu’s campaign motto some time ago? “A strong leader for a strong nation.” Years later, what do we have? We have no sense of any long-term plan for Judea and Samaria. We have seen no indication that he will rein in the hilltop lawlessness. We have no reason to believe that he will keep the government’s promise to non-Orthodox American Jews. All we know is that his paramount conviction is that he must stay in power.The Amona events are over, but the root of the unrest remains entirely unaddressed. American Jews are focused on Trump right now, but quietly, they are growing more disgusted with what is unfolding here. Almost everywhere one turns, the passion that was long at the heart of Zionism is eroding. Passion cannot endure without vision.Unless something dramatic changes, Netanyahu may manage to stay in power, but he will be leading a country withering away even as we watch. ■ The writer is the Koret Distinguished Fellow at Shalem College in Jerusalem. His book, Israel: A Concise History of a Nation Reborn, received the National Jewish Book Award as the 2016 “Book of the Year.”