A historic moment may be looming on the horizon for Israel.

The Arabs have begun to think the unthinkable: the value of that famous 2,400 year-old Indian saying, “The enemy of my enemy is my friend.” 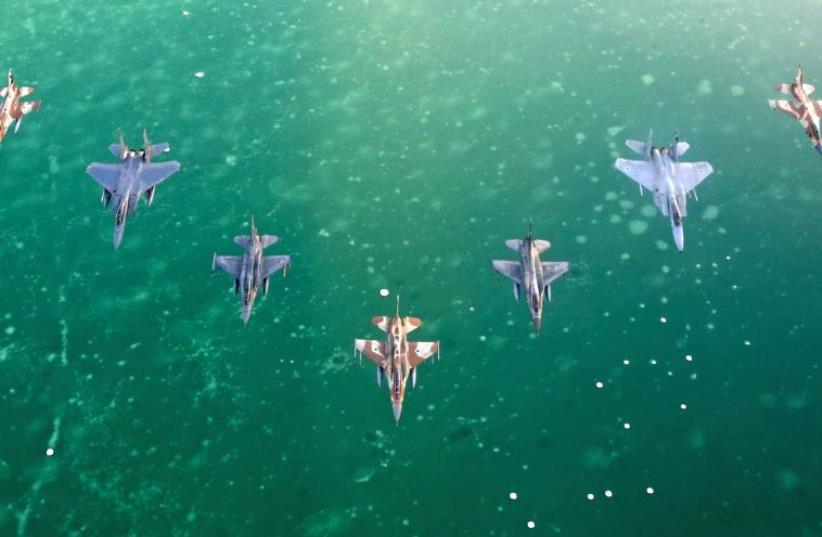 IAF fighter jets fly over the Dead Sea
(photo credit: IDF SPOKESPERSON'S UNIT)
Advertisement
From its birth in 1948 to 1973 Israel was involved in five wars with the Arabs. After Israel survived, most Arab countries maintained their hostility, but slowly things changed. The 1978 Camp David Accords brought a tense but lasting peace with Egypt.In 1994 a peace treaty was signed with Jordan. There was even progress on the Palestinian front. But that was the end of the move forward. Today Israel is recognized by over 160 of 193 countries, but only two of 22 Arab countries, and sees no progress on the Palestinian issue.Now, however, we hear a different tone in the Arab world. Egyptian leader Abdel Fattah Sisi has revealed that he talks with Prime Minister Benjamin Netanyahu “a lot.” Israel is evidently cooperating with Egypt in the battle against Islamic fundamentalists in the Sinai. In July Egyptian Foreign Minister Sameh Shoukry visited Israel and declared that Israelis are not guilty of terrorism in the region. In August Sisi said that relations with Israel were “important” to Egypt and declared Egypt wanted close security ties with Israel.Jordan and Israel seemingly are privately cooperating on a series of common issues and meeting frequently.Jordan, the Palestinian Authority and Israel are working together on a Dead Sea – Red Sea water project.In the USA F Red Flag military drill in Nevada, the Israel Air Force flew with the air force of the United Arab Emirates.Saudi Arabia has displayed official photos of Foreign Ministry director general Dore Gold shaking hands with a former adviser to the Saudi king. The Saudi press is now warmer on the topic of Israel.This week the Iranian Grand Ayatollah Khameini derided the “heartless and murderous” Saudis who then denounced the Iranians as “not Muslims.” With Iran moving toward developing nuclear weapons and Shi’ites fighting Sunnis in Syria, Iraq, Libya and Yemen, the Sunni Arab world feels vulnerable.Turning to the Americans, Europeans or Russians no longer seems viable. The Europeans are fixated on internal issues, even more so with the British exit from the European Union. GDP growth is 1.5 percent per year. The EU has little power projection capability. The Americans have that capability, and a $560 billion military budget. But their semi-withdrawal from the Middle East and promotion of the Iran deal call into question any major American effort to deter Iran. The Russians, openly cooperating with Iran, last month launched air attacks for a week on Syria from an Iranian air base.Other potential allies, such as Japan and China, are even less likely. Japan, a major economic power, is not allowed under the terms of the post-war constitution to militarily intervene abroad. Communist China, while developing its military and economic capabilities, is focused on dominating the South China Sea.The Sunni Arab states are hampered by internal problems, limited military budgets (save for Saudi Arabia) and relatively weak economies. The Sunni Arab world is largely poor save for the oil-rich sheikdoms. Egypt is at $3,200 GDP/capita while Jordan is at $5,200. Even oil-rich Saudi Arabia is at a modest $25,000, far less than Israel’s $37,000.This leaves Israel. Israel is allegedly one of nine nuclear powers, with 80-100 atomic bombs deliverable by air, sea and land. The Institute for the Study of War has called the Israeli army the best in the Middle East. The institute found that Israel, with only eight million people and around 20,000 square kilometers of territory, has the world’s best air force, plane for plane.Swiss Lausanne University found that Israel, together with the United States, Russia, China and India is one of the five leading high-tech powers in the world. This year Israel is receiving over $5b. dollars in foreign tech investment.The Arab leaders are impressed by Israeli connections to the US and Russia. Over the past decade the US has provided Israel with $30b. of weapons, with more to come. Russia, Israel’s enemy from the mid-1950s to the late 1970s, is now counted as an Israeli friend. Netanyahu talks to Russian President Vladimir Putin almost every week and has visited Russia a number of times, while Putin has gone twice to Israel.Many Sunni Arab states, desperate to ward off the Shi’ite threat of a nuclear Iran in the years to come, are starting to see Israel as a possible ally.The Arabs have begun to think the unthinkable: the value of that famous 2,400 year-old Indian saying, “The enemy of my enemy is my friend.”The author is a professor at the Josef Korbel School of International Studies at the University of Denver.