A Jewish boy in wartime Glasgow

Rationing was the rule of the day. Ration books applied to almost every area of life. 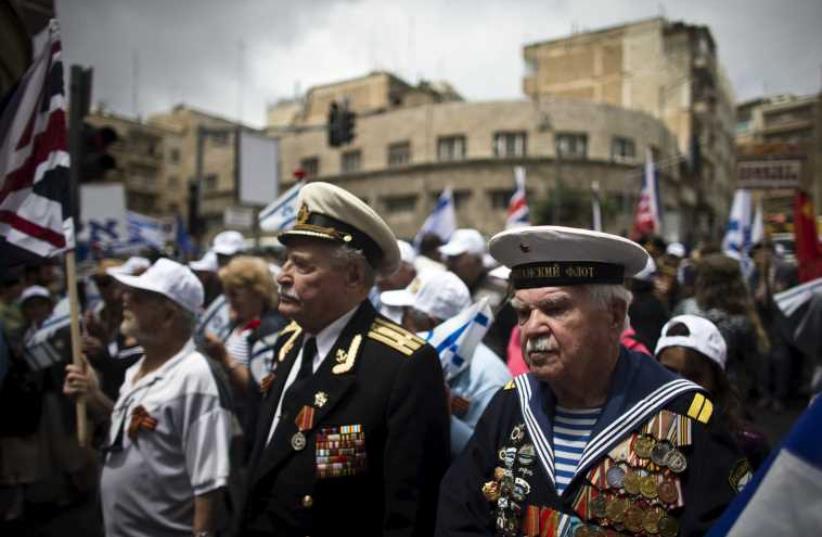 Veterans march through Jerusalem to mark WW2 Victory in Europe Day.
(photo credit: REUTERS)
Advertisement
Gerald “Gerry” Meilamed and his wife, Roz, are stalwarts of our synagogue, active members whose volunteer efforts are greatly valued. Gerry and Roz are also natives of Glasgow, Scotland, who immigrated to America many years ago. Gerry was only a child at the outbreak of the Second World War. But his memories are vivid and he recounted to me the peril of having to live without a father who had been drafted in the army and, especially, how he and his family survived German bombings of Glasgow.Gerry was born in Glasgow in 1936. At the age of four he remembers his father coming home from work with the daily newspaper and the headline “WAR.” The boy barely understood the serious nature of the situation, never realizing that his life would change drastically. His father had to give up his tailor shop to join the war effort. Gerry’s mother Becky had to raise Gerry and his sister, Sylvia. Rationing was the rule of the day. Ration books applied to almost every area of life.Most nights Gerry and his family did not bother to get dressed for bed. Every second or third night German bombings caused the air raid sirens to wail and the Meilameds took refuge in the bomb shelter. They spent the night in the shelter until all was clear. Gerry heard the firing of the anti-aircraft guns close by. The Germans dropped incendiary bombs on an industrial complex and an oil refinery in an area known as Clyde Bank. The fires from the bombings raged. Clyde Bank was only a few miles from the Meilamed’s home. It was frightening.In between the anti-aircraft fire, searchlights lit the night sky searching for bombers. In the morning, those in shelters emerged. Gerry and the other boys picked up shrapnel littering the street. One street in Glasgow was completely wiped out by German bombers. The Meilamed’s home remained standing and strong. Gerry remembers collecting silver paper in school for the war effort.GERRY ALSO remembers the covert arrival of Rudolf Hess to Scotland in May 1941. Hess, a leading member of the Nazi Party and deputy to the führer, abandoned the Third Reich to try to negotiate a peace treaty with the Allies to end the war. Hess was immediately taken into custody upon his arrival in Scotland. The German leader was held in a military barracks close to Gerry’s home.Children received gas masks, as did the adults, but fortunately never had to use them. Still, life during wartime was difficult. Furniture was rationed with coupons. Jerry, along with the other denizens of Glasgow, felt trapped. They were constantly on a state of alert and terrified of the bombings.After the war, the citizens of Glasgow celebrated. The air-raid shelters were dismantled and the bricks were used for building structures that would benefit the community. Gerry’s parents on both sides were immigrants from the Russian Pale of Settlement. His paternal grandmother Annie built a soup kitchen for the poor and those Jewish refugees seeking rescue from the czar in the period of the First World War. Her kitchen fed hundreds. She hosted large Passover Seders for the family, and during the war invited Jewish soldiers from Poland who were stationed in Scotland to attend the festivities.Gerry told me that there was little anti-Jewish animus in Glasgow and in Scotland. A Scot who had too much to drink would curse the Jews on occasion. But those incidents were rare. His neighbors were Christians; they had very cordial relations. Gerry did not learn about the Holocaust in detail until he arrived in America. There was little talk of the genocide in Glasgow. As a boy, Gerry did see some photos in the newspapers from the concentration camps but he was too young to understand their implications.Gerry met Roz Steinberg in Glasgow in 1961. They have two daughters, five grandchildren and one great-grandchild. Gerry always has questions for me after the Shabbat morning services. He was a prize Hebrew student in his heder in Glasgow. While the boys in the supplemental Jewish school enjoyed their breaks when they could play soccer, Gerry’s fondest memory was receiving a leather-bound prayer book as a first-prize award  for his studiousness. He and Roz left Glasgow many years ago. They are proud of their origins. The story of their community in wartime needs to be told. The writer is rabbi of Congregation Anshei Sholom in West Palm Beach, Florida.