A journey through Jewish history 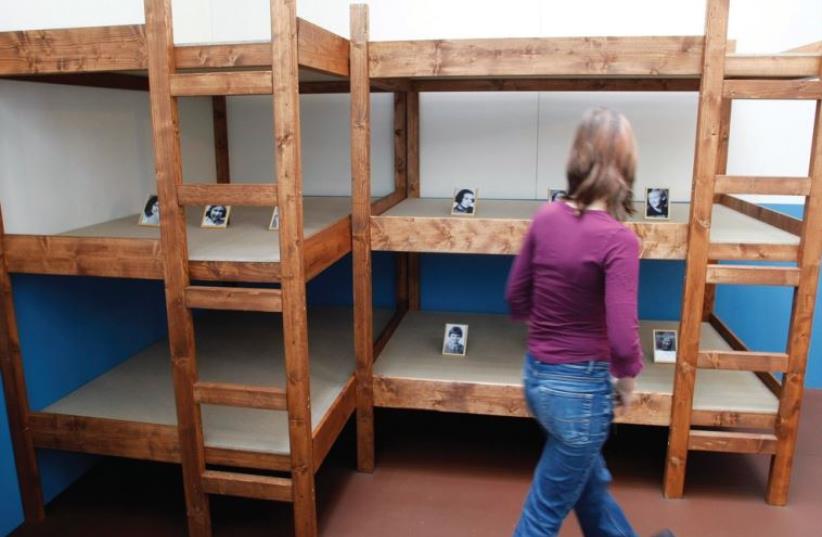 A VISITOR walks in front of an exhibition about life in the concentration camp Theresienstadt
(photo credit: REUTERS)
Advertisement
Usually, a crowd of nearly 100 16-year olds can be heard from a great distance. But on this occasion, as they walked down to the river on the outskirts of Terezin, the chill of the silence matched the piercing cold of the Czech midwinter.While on their Year 10 trip to Israel last December, at the culmination of a three-day interlude in Prague, students and staff visited the Theresienstadt concentration camp, the infamous site where the Nazis attempted to present a “model camp” to the Red Cross and the world, masking a reality of 33,000 Jews dying of starvation and disease, and 150,000 deported to their deaths in Auschwitz and Treblinka.We learned the history of the camp, and saw where prisoners lived, where they worked and, as we entered their cramped, hidden, synagogue, where they prayed.And at the end of the day, we saw where they were buried, at least until the time that the Germans ordered that all corpses were to be cremated. The Jewish burial society, although nominally autonomous, had no choice but to follow this command, yet their dedication was such that they preserved the ashes of 22,000 victims in carefully guarded boxes.Our guides told us this story, and explained that the final fate of these ashes was something that we would learn later. So it was, as darkness fell, we made our way to the river in total silence, each student accompanied by their own thoughts. There we stood, by the spot where the Nazis, desperate to hide their crimes from the oncoming Russian army, forced inmates to empty the contents of each of these precious boxes in the waters of the river. After that, nothing remained.The entire five weeks of the students’ trip was impactful and, in many cases, life-changing (as well as being great fun). Each participant would choose a different experience as the most meaningful. But for many (and for me, who had the privilege of joining them for part of the program), that moment as we stood in the cold and dark by the river, and imagined the ashes floating away into nothingness, was the one to be remembered above all.The true learning from that encounter was only to be understood by seeing it as part of a continuum. For the victims cremated at Theresienstadt, the flowing waters were their end, but the Jewish nation carried on, as it always does. In a very limited sense, we re-enacted this saga, as we left the river and its terrible memories and immediately drove to the airport for our return flight to Israel.The miracle of the birth of Israel, so soon after the horrors of the Shoah, and the rise from such depths to reach such heights, is something that most Jews today take for granted, something that they rarely contemplate.Yet only a little imagination was required to see the three hours of our flight from Prague to Tel Aviv as symbolizing the remarkable transition in the three years from 1945 to 1948.By the time we arrived back in Jerusalem it was close to sunrise; most students took the opportunity to sleep until late in the morning. But I joined a dedicated band who, determined to get the most out of every minute of their trip, visited a local kindergarten, witnessing and participating in the little children’s Kabbalat Shabbat festivities. As we sang and danced to the familiar Shabbat songs, part of the shared birthright of Jewish children across the world, the abstract idea of the continuity of the Jewish people took on a real and personal form. Here was the answer to Theresienstadt; here was what Jewish survival actually means: little children, privileged to live and grow in Jerusalem, singing songs about Shabbat as every generation before them had done. These children could not imagine the struggles of the early Zionist pioneers any more than they could picture the tragedies of the Holocaust. Although they do not yet enjoy the state of peace that we pray for each day, Israel is truly and unquestionably their home.It is always a pleasure to visit Israel, and a special one to accompany young people and to see the country through their eyes. We toured sites from the north to the south; we lived, learned and loved Israel. But we did so much more. We told a story – of Israel’s birth and survival and its emergence as the miraculous yet real state that we are blessed with today. But that story is part of a greater one. The transition from the silence of the cold dark night by the river, to the joyous singing of children, in the warm bright Jerusalem morning just a few hours later, told the story of the eternal Jewish people in the way that no classroom lesson ever could.And our students learned that they will be among those who will write the next chapter of that story.The author is principal of Mount Scopus Memorial College in Melbourne, Australia.