A picture that tells a different story

It remains to be seen whether in the twilight zone of his presidency, between November 8 and leaving office, Obama will seek, as Netanyahu fears, to set out parameters for a two-state solution. 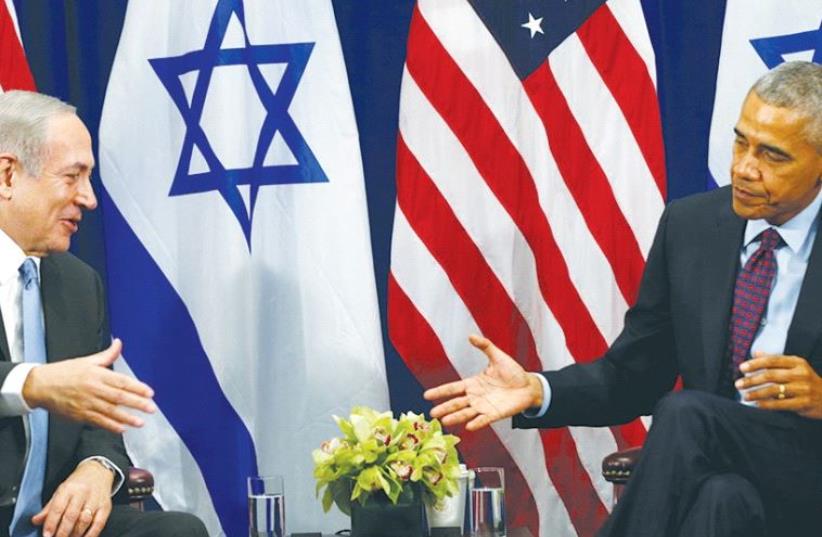 A SMILING Prime Minister Benjamin Netanyahu reaches out to shake the hand of an aloof President Barack Obama during their meeting Wednesday in New York.
(photo credit: REUTERS)
Advertisement
Some pictures really are worth a thousand words.Prime Minister Benjamin Netanyahu sought to make over his differences with US President Barack Obama in a photo-op as they met, for probably the last time, at a hotel in midtown Manhattan Wednesday on the sidelines of the United Nations General Assembly.Netanyahu went out of his way to present a rosy picture, thanking Obama for the $38 billion military aid package signed last week, stressing the common interests and values of the two countries, leaving out their differences and joking about inviting Obama to play golf near his house in Caesarea once he stepped down come January. The president replied by saying he would set up a “tee-time.”But the picture tells a different story, Netanyahu is jovial, smiling, leaning forward and reaching out as he prepares to shake the hand of the president, Obama is reclined, he avoids eye-contact, his hand is almost withdrawn and he is cool to the point of indifference, seeming barely to hide his lack of affection for the prime minister.Behind the scenes of the meeting it was business as usual: Obama is reported to have pressed Netanyahu on settlements as an obstacle to peace, while Netanyahu, according to senior administration officials quoted in the American media, pushed back on the argument that settlements are hindering the peace process. “They’ve never papered over their differences,” was how one official put it.The Netanyahu-Obama relationship has been a long and bitter one. In Obama’s eight year’s in office, the two have met 17 times. They have antithetical worldviews and clashed repeatedly over settlement construction, but their relationship deteriorated when Netanyahu was seen as meddling in Obama’s campaign for reelection after his first term and then crashed as Netanyahu spoke over Obama’s head against the Iran deal to a joint session of Congress.But it is early days yet to sum up their relationship: Netanyahu, as Obama noted on Wednesday, will be staying on for “quite a bit longer,” and the president is leaving office on January 20 of next year.It remains to be seen whether in the twilight zone of his presidency, between November 8 and leaving office, Obama will seek, as Netanyahu fears, to set out parameters for a two-state solution or whether he will withhold a US veto on a possible French resolution that would do the same.For the moment we cannot gauge what the president will do. Few clues were dropped in Obama’s speech to the General Assembly, where he devoted barely a sentence to the Israeli- Palestinian conflict, saying just that Palestinians need to reject incitement and Israel to realize it cannot permanently occupy and settle Palestinian land.Until the elections, he will not want to do anything that could hurt Hillary Clinton’s chances of replacing him in the White House by taking a move that could be seen as being against Israel. Indeed, 88 senators, both Democrats and Republicans – among them Democratic vice-presidential nominee Tim Kaine – penned a letter prior to the Obama-Netanyahu meeting calling on the US to uphold its veto against one-sided resolutions.On the other hand, as Bill Clinton’s former special Middle East envoy Dennis Ross noted, if Donald Trump were to pull off an upset win, Obama could be “more inclined to go for a Security Council resolution to try to do something that binds, creates standards for the future that the next president couldn’t undo.”Either way, the final chapter of the Obama-Netanyahu relationship has yet to be written.