A presidential candidate who embodies our values and ideals

When it comes to progressive issues, Clinton lines up with the bulk of Jewish voters. 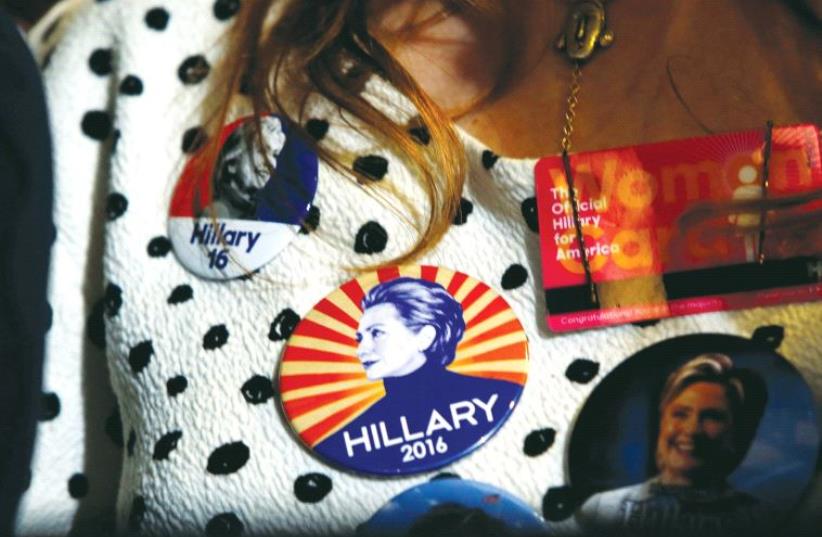 A SUPPORTER wears Democratic US presidential nominee Hillary Clinton buttons during a Clinton campaign rally in Las Vegas, Nevada, on August 4.
(photo credit: REUTERS)
Advertisement
For the many decades when I served as a pulpit rabbi, I remained neutral in partisan politics. Politics was not my area of professional expertise and because of my congregants’ diverse opinions, I did not feel justified taking sides and closing myself off from those with whom I differed. My rabbinic role was not to express preferences for political parties or candidates, but rather to teach Torah and to represent the Jewish community – our beliefs and the diversity of our practices – to the broader one in which we live.At the same time, I was conscious of the lessons and the example of our teacher, Rabbi Abraham Joshua Heschel z”l, who encouraged us to echo the voice of our prophets in addition to describing the practices of our priests.He urged us to teach Torah by being living examples of morality, civility, justice, truth and purpose. Through his example he taught us to highlight hypocrisy and evil, to protect the weak and the defenseless, to provide for the needy and uplift the downtrodden, as well as to work for the Jewish future in America, in Israel and around the world. In doing so, we would be reflecting our tradition’s teaching of the divine concern for all humanity.As we approach this year’s presidential election, I feel compelled to take sides. I do so not because I have better information about the candidates than others do. I do so because one candidate continues to prove how unsuited and unprepared he is to hold that office while the other meets a combination of principles, purpose and programs that our upbringing supports.During the past few weeks I have found myself increasingly anxious and concerned as many voters, to my mind, mistakenly draw a false equivalence between Donald Trump and Hillary Clinton.That comparison is proven totally wrong by Mr. Trump’s wild and dubious claims, his ridiculous hyperbole, falsehoods and outright lies, his vicious and unsubstantiated accusations, his bluster, boastfulness, disrespect for others and often childish responses to questions and criticism as well as the disconnect between truth and his distorted version of reality.The chasm between Secretary Clinton’s proven character and Trump’s lack of it is enormous. His career has been totally self-serving while hers has been a lifelong commitment to public service. He maligns as stupid, incapable or “the worst,” anyone with whom he disagrees. Yet nothing in his biography speaks of philanthropy, communal service or efforts on behalf of anyone but himself.Even his so-called business success is questionable and he admits that he has acquired his wealth at the expense of others. The obvious emptiness of his career and vacuous nature of his ideas endanger our nation and should earn him only opprobrium and disdain.I have never found the perfect candidate, as I have never met anyone without flaws.But in this election, given the glaring weaknesses and insulting behavior of one candidate, only Hillary Clinton deserves our support.When it comes to progressive issues, Clinton lines up with the bulk of Jewish voters.She supports a strong social safety net, a woman’s right to choice, equal pay for equal work, immigration reform and gun control.When it comes to Israel’s security, Clinton has been forceful in defending the Jewish state’s right to self defense and understands that peace between Israel and the Palestinians will come only through direct negotiations between the two parties. She has decried anti-Semitism throughout the world, and has repeatedly condemned the boycott, sanctions and divestment movement, understanding it for what it is: a movement that seeks the end of Israel.Recognizing the dangers of Iran and its support for terrorism, she has vowed to take a tough stance on enforcing the nuclear arms agreement signed last year with Iran, regardless of what any of us might have thought of the agreement in the first place.Clinton is today by far the better choice, the better candidate, the better prepared for the office. She is by far the only one of the two ready for the presidency, whose religious upbringing, life’s work and commitments, purpose – not just promises – have prepared her to lead the country.She has the foundation for holding the office I believe she has earned.I therefore encourage us to work for Hillary Clinton’s election and to encourage others to join us in voting for her. In doing so we will be working together to mold a society in which all people will feel safe, secure, supported and unafraid.The writer is senior rabbi emeritus of Adas Israel Congregation in Washington, D.C., and a past president of the Rabbinical Assembly, the International Association of Conservative/ Masorti rabbis.