The ultimate celebration of Shavuot has to be in the Land of Israel and especially in Jerusalem. 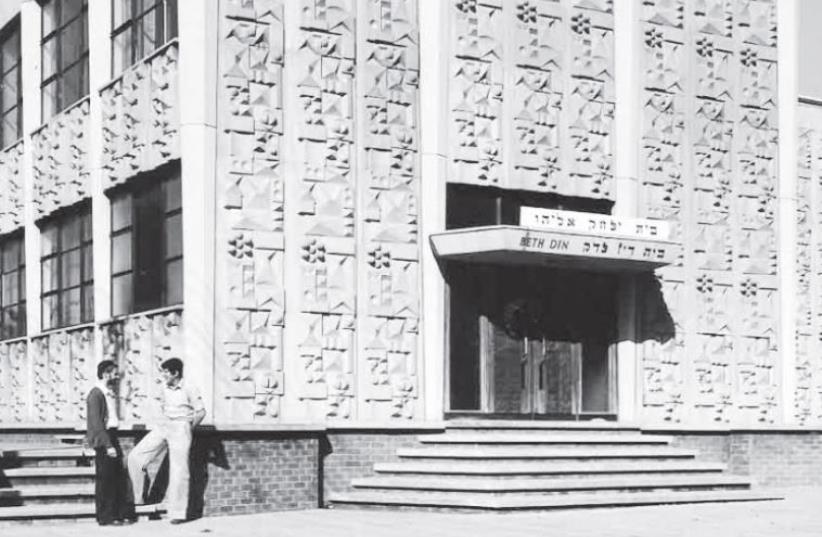 The Bnei Akiva Synagogue in Yeoville, South Africa, in the 1970s
(photo credit: Courtesy)
Advertisement
As one who was born and raised on the southern end of the Dark Continent, the festival of Shavuot had entirely different connotations for me and my fellow South African Jews compared with those who grew up in Israel, Europe or the United States.My hometown is Johannesburg, where the festival is usually celebrated in deepest winter. Although Johannesburg winters are not as severe as those in the Northern Hemisphere, the nights can be extremely chilly with temperatures going down to freezing point. The atmosphere there was more like Hanukka than Shavuot. Many people would have celebrated the holiday with hot drinks and cheesecake in front of a cozy fire.My first memories of Shavuot are as a very young child in the local Jewish kindergarten. I remember how all the children in the kindergarten were made to participate in a “firstfruits” ceremony in the nearby synagogue.Each sweater-clad child carried a container of fruit down the central aisle of the shul. As it was winter, there were no firstfruits. Still, we managed to cobble together a shoebox decorated with blue and white crepe paper filled with local winter produce, including apples, oranges and the odd guava.Fast-forward to my teenage years, when I progressed from an ardent secular Zionist to a religious one. I joined Bnei Akiva and experienced my first Tikun Leil Shavuot in the Bnei Akiva Synagogue in Grafton Street, Yeoville.The concept of tikun leil is a fairly recent development. Following the Shavuot evening meal, worshipers proceed to the synagogue for the evening service, followed by an all-night Torah study session based on the kabbalistic practice that was initiated in Safed in the 16th century.In the 1960s and ’70s, Yeoville was the center of Orthodox Jewish life in Johannesburg. Today it is a no-go crime-ridden area. The Bnei Akiva Synagogue became a magnet for scores of youngsters. The holiday began early and I have vivid memories of the boys and girls gathered round a kerosene brazier wrapped in coats and blankets, while the Shabbat urns steamed away in the background. We kept ourselves warm and awake with coffee and cookies, listening to lecture after lecture until the dawn, when the sun rose at around 7 a.m.I emerged from the darkness of apartheid-ridden South Africa into the freedom and light of London, where I resided for many years. There, the experience of Shavuot could not have been more different.Because Shavuot falls around the time of the summer solstice, the evening service begins only at around 10 p.m.followed by a rushed festive meal and a midnight Tikun. This often ended at around 3 a.m. when the first rays of the sun appeared on the horizon, allowing us to be home and in bed by 6 a.m.One Shavuot in the Northern Hemisphere that stands out in my memory was spent with my wife’s family in the Five Towns in Woodmere, New York.The opulent indulgence is forever etched in my culinary memory. The good folks of Woodmere were dressed to the nines! Professional caterers were hired to feed the hungry learners between lectures. The menu would have done any Italian restaurant proud.The all-night fare included every kind of pasta from penne to ziti. The pièce de résistance was a French chef complete with chef’s hat preparing crêpes suzette and omelettes for those who were not embarrassed to indulge themselves further.The ultimate celebration of Shavuot has to be in the Land of Israel and especially in Jerusalem. Soon after 10:30 p.m., when folks have finished reciting Grace after Meals, the streets begin to fill with people wending their way to attend Torah lectures in every part of the city. Religious, secular, men, women, young and old gather in synagogues and lecture rooms to listen to words of Torah delivered by the great and the good in Hebrew, English, French, Russian, Yiddish and Spanish. The tradition of Tikun Leil Shavuot has spread across the land and was brilliantly captured in Joseph Cedar’s award-winning movie Footnote. Newspapers publish special pullout sections detailing which lecture is being given where, by whom and at what time.The culmination of Shavuot’s night of learning in Jerusalem is the procession of worshipers to the Western Wall.This takes place at around 4 a.m. when the city reverberates to the sound of thousands of marching feet that stream toward the Old City, where upwards of 50,000 people gather to pray. It is a truly unforgettable sight.Recently I read about the 19th-century rabbi Samson Raphael Hirsch, who commented that the Festival of Shavuot is the culmination of the journey of the Jewish people, who were given their physical freedom on Passover, and received their spiritual redemption seven weeks later, after the giving of the Torah on Mount Sinai.This represents a journey from darkness to light, one with which many of us, including myself, can identify in our own unique way.  The writer lives in Jerusalem