A supporter of Australian Jews and the State of Israel

Under Prime Minister Turnbull, the strong Australian support for Israel will only continue, or if anything grow even stronger. 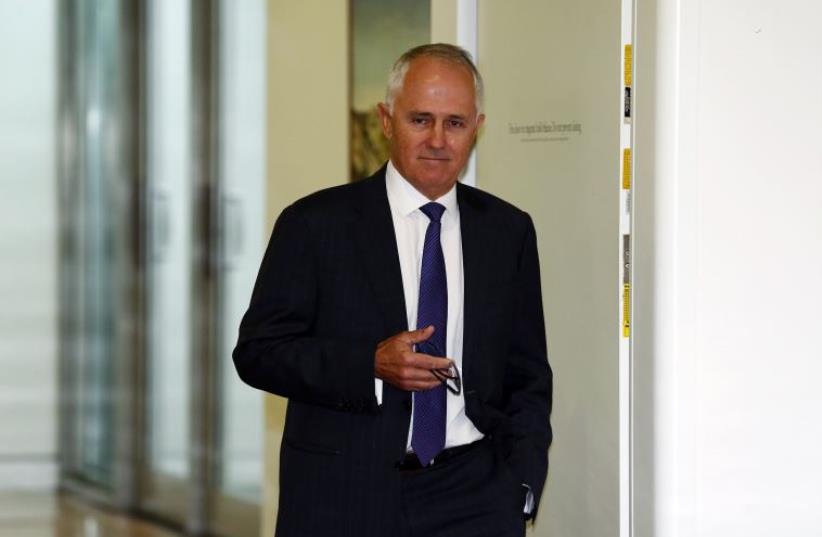 Australian Prime Minister Malcolm Turnbull
(photo credit: REUTERS)
Advertisement
I have known newly-elected Australian prime minister Malcolm Turnbull for over 10 years, before he even ran for public office.In that time, I have been with him on the campaign trail and at private events. I have seen him speak to synagogues and Jewish groups, as well as behind closed doors without media glare and at public debates.So I can say without a shadow of a doubt that Malcolm Turnbull is an incredible friend and supporter of both the Australian Jewish community and the State of Israel.He is also one of the smartest, most eloquent, creative and hardest working politicians in the country, and knows how to feel the pulse of the community.Even before reaching the top political job, Turnbull was a successful lawyer, businessman and entrepreneur.It should be noted that Turnbull’s election, in which he defeated Prime Minister Tony Abbott in internal Liberal Party elections to lead the country, was purely on domestic issues, with what was largely seen as a number of economic mishaps by Abbott and a general sense of stagnation.Observers of Australian foreign policy though, especially in Jerusalem, should not expect any major changes in this regard, particularly as Julie Bishop, who was foreign minister under Abbott and with whom Turnbull is very close, will retain her position.At the outset, it should be made clear that the conservative Australian government under Abbott was already exceptionally pro-Israel. We saw that with the change in voting at the United Nations, support for Israel in times of conflict, its vociferous denouncement of the Boycott, Divestment and Sanctions (BDS) movement and even the government’s decision last year to drop the term “occupied” in reference to Israeli settlements because it was “freighted with pejorative implications.”Under Prime Minister Turnbull, the strong Australian support for Israel will only continue, or if anything grow even stronger.In fact, in an interview with Israeli commentator Shmuel Rosner in Sydney, only last month, Turnbull spoke openly about Australia’s “very good” relationship with Israel, saying “we need to collaborate more with Israel, particularly on matters of science and technology. The more we can do with Israel, the better.”Turnbull’s electorate, Wentworth (in which I had lived all my life in Australia and am still registered to vote), lies in the heart of Sydney’s eastern suburbs. Importantly, it has the largest concentration of Jewish voters of any electorate in the country, at about 15 percent. Australia’s Jewish population, which numbers about 120,000, represents only 0.5% of the overall population of nearly 24 million.Since 2004, when he was first elected to Parliament, Turnbull has increased his vote in the electorate in the three subsequent elections, demonstrating that he is also a thoroughly popular local member.He is also exceptionally popular with the Jewish community, often attending and supporting local events, from lighting Hanukka candles, speaking to synagogues and schools and peppering his speeches with Yiddish terms and phrases. At one event several years ago, I even recall Turnbull saying he feels like he is one of the “mishpucheh” (family). And indeed he may be, literally! In a 2013 interview with the Australian Jewish News, Turnbull even hinted he has Jewish roots, saying “my mother always used to say that her mother’s family was Jewish.”Although Turnbull added he had never researched this further, “there is no doubt that the strong traditions of family and the whole heimeshe [Yiddish for ‘homely’] atmosphere of the Jewish community” was something he found very admirable and influenced a lot of his outlook on life.But Turnbull’s closeness to the Jewish community has always been something very sincere, much like his support for Israel.Turnbull truly “just gets it” when it comes to Israel’s security predicament and the need, as he puts it, for “Middle East’s only democracy to take the necessary steps to defend itself from terror.”During last summer’s conflict in Gaza, Turnbull said, “As long as Hamas is firing rockets into Israel, the Israeli defense force has to defend its own population. I mean, that’s what we’d expect the Australian army to do for us.”Before being elected prime minister, Turnbull was the communications minister and a leading investor in the Australian telecommunications industry. He has frequently expressed a strong sense of admiration of Israel’s high-tech and innovation accomplishments, an area where he strongly believes Australia and Israel can collaborate more closely.On other matters close to heart, Turnbull has recently said that although he supports the Iran deal, he does so “cautiously,” while “recognizing and emphasizing with the anxiety in Israel.”Turnbull is also a strong supporter of the two-state solution and the need for Palestinians to make greater effort in the pursuit of peace. He is also a firm believer in Israel’s right, and duty, to exist as a Jewish state.Perhaps the most telling insight from Turnbull on Israel came during his interview with Rosner last month, where he said: “We [Australia] see ourselves as having shared values with Israel. We see Israel as being in the first trench, on the first line in the battle against extremist tyranny and terrorism.”Having had the honor to know Malcolm Turnbull both personally and professionally for over 10 years, I can say without a shadow of a doubt that the special relationship between Australia and Israel will only continue to grow from strength to strength under his leadership.

The writer is a Middle East analyst and freelance journalist based in Israel who lived in Australia for 25 years, during which time he was also very actively involved
Advertisement
Subscribe for our daily newsletter