A window of opportunity

The agreement which the P5+1 powers concluded with Iran this week is a bad deal. 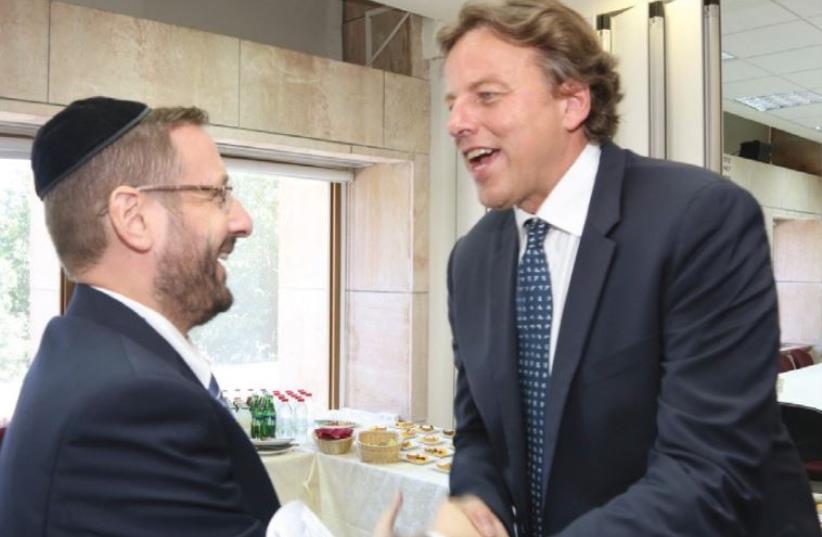 Dov Lipman and Dutch Foreign Minister Bert Koenders
(photo credit: SASSON TIRAM)
Advertisement
The agreement which the P5+1 powers concluded with Iran this week is a bad deal. Islamic fundamentalism has been rewarded, and Tehran will no doubt flex its muscles with greater confidence after this pact.I do believe, however, that this disaster opens a window of opportunity on another front. The “moderate” Arab states’ fear of the rise of Islamic fundamentalism – and of an even more powerful Iran emerging after this deal – can yet be converted into something beneficial for Israel, if only our leadership has the courage to make it happen.MK Yair Lapid was the first Israeli leader to speak of a regional solution to the Palestinian issue in place of bilateral negotiations, an idea which he proposed under the previous government and has since been embraced by members of a cross-section of political parties including Labor, the Likud, Yisrael Beytenu, Kulanu and Meretz. It recognizes that the Palestinian leadership alone is incapable of making the compromises needed for Israel’s security, and that it can and will do so only in the context of a regional solution in which Egypt, Jordan, Saudi Arabia and the Gulf states give it the backing – or force it – to make those compromises. The motivation for these “moderate” states to pressure the Palestinians has increased significantly following the completion of the Iranian deal, which has amplified their need to work with Israel to confront extremist Islam in the form of a potentially nuclear armed Iran and with ISIS spreading across the region.
See the latest opinion pieces on our page
We heard criticism of the deal emanating loudly from Israel this week, but the quieter responses from the Arab states are far more significant.
“The Obama administration has made a major mistake of historic nature that will leave a big burden on the next administration in terms of dealing with the mistake and fixing it,” one Saudi Arabian official told CNN.Jamal Khashoggi, general manager and editor-inchief of Al-Arab News Channel, tweeted: “Reality forces us to be against the deal and to exercise international pressure against all of its details and to stop the deal if that is possible.” Khashoggi told Al Jazeera that “the arm of Iran still spreads through the region, and this issue was not dealt with at all in Vienna.Iran’s aggressive policies are still in place and, therefore, there is more than one reason for worry.”Muhamed A. Sabati, a political researcher in Riyadh, asked: “Why was the deal signed today? Has there been a change in Iranian policy regarding terrorism? Has it stopped supporting terrorism? Reality says otherwise.”So while we rightfully condemn the Iranian deal – and try to convince 13 Democratic senators to insist that no further American sanctions are lifted unless inspectors are allowed to examine all Iranian nuclear facilities without warning – it behooves Israel to finesse the Iran agreement to its favor regarding the Palestinian conflict.This week I had the honor of meeting with Dutch Foreign Minister Bert Koenders in Jerusalem. I explained to him that the broad Israeli political establishment no longer accepts bilateral negotiations as a suitable solution, and that Europe must embrace the regional framework approach. I also explained that the majority of Israelis will not support an agreement which does not address all of Israel’s security concerns, something which cannot be accomplished through bilateral negotiations. The minister understood that bringing the regional powers to the table is the only viable option for making any progress on the Palestinian issue. We must continue sending this message to capitals throughout Europe and the world.Will such a conference yield actual results – an agreement which meets Israel’s security needs while separating us from the Palestinians? We don’t know.But if there is anything this horrendous deal with Iran has taught us, it is that we cannot entrust our future into the hands of any forces other than our own, and that the only thing Israel can do to protect itself and provide for its security needs is to not be passive but to be proactive.This indeed could be a historic moment, and Israeli leaders must muster the courage to attend and perhaps even initiate a regional conference with the Arab states, to address all regional issues including the Israeli-Palestinian conflict.We should not let this window of opportunity close without knowing that we did all we could to use it to our advantage.The author served in the 19th Knesset. He is chairman of Anglo and Diaspora affairs for the Yesh Atid party, hosts a radio show on voiceofisrael.
Advertisement
Subscribe for our daily newsletter