We British Jews knew it all along. The Labour leader has a track record of being outside the pale of political norms. 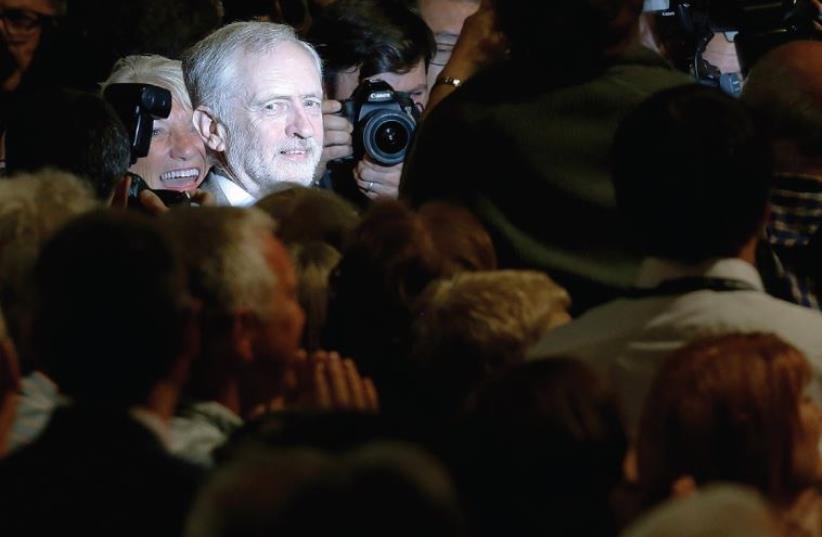 BRITISH LABOUR leader Jeremy Corbyn leaves after delivering his keynote speech at the party’s annual conference in Brighton in September 2015. (
(photo credit: REUTERS)
Advertisement
‘Israel is a racist endeavor.”So read the posters put up around bus shelters throughout London yesterday, and most prominently facing the houses of Parliament.When the genie is out of the bottle, as anyone knows, it’s hard to get it back in. And when the Labour Party leader, Jeremy Corbyn spent weeks prevaricating, ducking and weaving to avoid signing up to the full IHRA definition of antisemitism, fueling his base of cocksure cult-like Palestinian sympathizers on the hard Left, when the Labour Party eventually adopted the IHRA definition (with the underlined caveat that they can call out Israel), the base posted their response.From a self-proclaimed man of peace (despite his penchant for engaging and sympathizing with the IRA, Hamas and who called Bin Laden’s death a tragedy) there’s a strong whiff of cordite around Corbyn and his acolytes. We British Jews knew it all along. The Labour leader has a track record of being outside the pale of political norms.It is precisely for his disgusting penchants that the hard Left embraced him as their savior and formed a messianic cult around him as the man to save Britain and the man to save the Left.What they really mean, of course, is that he gave voice and credibility to their non-mainstream views, the type that had no place in any rational political discourse, and which hitherto put most of his support in the same political bin as the communists or St. George’s flag-waving, shaven-headed racists on the Right.The results are clear to see. “Nothing to see here,” is the refrain from Labour as British Jews look on in horror. “He’s wrong and doesn’t get it,” is the spin retort to Lord Jonathan Sacks, the former chief rabbi and hugely respected voice of reason who pulled the alarm cord last week.“When people hear the kind of language that has been coming out of Labour, that’s been brought to the surface among Jeremy Corbyn’s earlier speeches, they cannot but feel an existential threat,” Sacks told the BBC. “Jews have been in Britain since 1656. I know of no other occasion in these 362 years when Jews – the majority of our community – are asking ‘Is this country safe to bring up our children?’ Now, this is very, very worrying.”Worrying indeed. Almost 40% of British Jews would “seriously consider emigrating” if Labour Party leader Jeremy Corbyn became prime minister, according to a poll conducted for The Jewish Chronicle that was published on Wednesday.Mr. Corbyn made things personal.He stoked up his rabid base in ways that President Trump can only fantasize about. He insults Jews day-in, day-out by suggesting that we feel nobody can critique Israel (when most Jews have daily conversations about government and politics in the Jewish state), claims we lack of sense of humor and, despite having lived there for generations, don’t get English Irony. He then feigns mock indignation when there’s a backlash from the community.It’s sickening and reminds me of a scene I witnessed in Belfast, when a couple were arguing in front of a relative. The man struck the woman and she fell to the floor, and the lady with her started, quite understandably, screaming and crying. The man then turned to the woman who he had just struck who was still on the floor and exclaimed while pointing to the upset woman: “See what you’ve just done? You’ve upset your mother.” I can’t think of a better comparison for the odious leader of the Labour Party and his treatment of the Jewish community in the UK when it comes to Israel. And doubtless, just like the struck woman and her mother, Jews will not forget, nor forgive.Nor should we.“Israel is a racist endeavor” is but the veneer on the table of how British Labour sees Jews under Corbyn. The wood itself underneath is – make no mistake – riddled and rotten with antisemitism. And Corbyn is the carpenter to blame.The writer is the director of public affairs for the European Jewish Association, a Brussels-based NGO which represents and acts on behalf of Jewish communities across the EU and wider European continent.