Jerusalem needs to respond with all due haste! 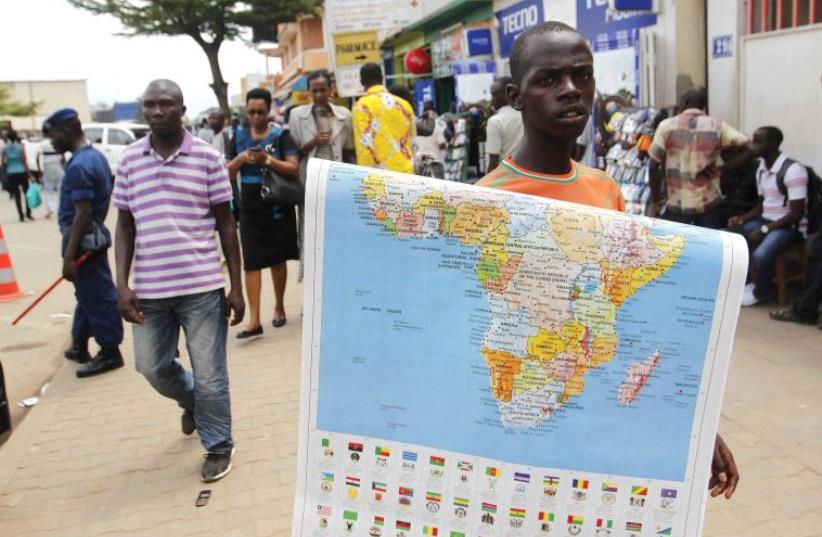 NEW FRIENDS everywhere for Israel. A vendor sells a map of Africa along the streets of Bujumbura, Burundi, last year.
(photo credit: REUTERS)
Advertisement
In late September, Prime Minister Benjamin Netanyahu stood at the podium of the United Nations and delivered a shocking message: “Israel has a bright future at the UN.” Indeed the world body has bullied and condemned Israel for decades, yet he now has good reason to believe things are changing. As an example Netanyahu cited his recent visit to East Africa, where he was warmly welcomed by numerous national leaders and large crowds of admirers. Even at the UN Opening Assembly, the Israeli premier held a side summit with leaders from 15 African nations. So Netanyahu and other Israeli officials know there is a major opportunity right now to strengthen relations with Africa.Still, I am not so sure the Israeli government fully realizes yet just how eager many African countries are to restore and expand their historic ties to Israel.The truth is that some of these capitals have been signaling this desire to Israeli officials for several years now and are actually frustrated that the response from Jerusalem has not been quicker.The Israeli government must seize this chance now while the iron is hot, lest the window of opportunity close. It has the potential even to eliminate some of the UNESCO fiascoes of recent days.In recent years, I and my senior colleagues at the International Christian Embassy Jerusalem have been traveling and speaking all across Africa and we can report firsthand that the continent is ripe for renewed ties with Israel. We first saw the huge diplomatic potential for Israel in Africa in 2011 when our ICEJ branch in Nigeria successfully lobbied their president, Goodluck Jonathan, not to recognize a unilateral Palestinian state in the UN Security Council, thereby blocking that diplomatic initiative.Since then, we have met with leaders of numerous African nations, including some with Muslim majorities, who have all expressed interest in restoring relations with Israel – a message we have faithfully conveyed to Israeli officials.Even Muslim leaders from black African countries have told us they are tired of Arabs bringing only trouble, weapons and terrorism, and would much rather have Israel’s technology.The time is ripe for Israel in Africa for several reasons. First, the people of Africa know what Israel has to offer in terms of technology, agricultural innovations and water conservation and recycling methods. Second, Africa needs help fighting terrorism and they know Israel excels at counterterrorism and cybersecurity.Third, the number of Evangelical Christians in Africa has grown exponentially in recent decades and thus there is a huge groundswell of grassroots support for Israel among the African people.Their leaders are aware of all these developments and are actually trying to outrace each other in restoring and deepening relations with Israel.Tanzania, for instance, will be opening a new embassy in Israel in November and a high-level delegation will be here for the ceremonies as well as for a fourth summit of business leaders from both countries to work on increased trade and joint projects. One such project is a 100- acre model Israeli farm being developed in Tanzania which will showcase all of the agricultural innovations available from the Jewish state. They expect government officials and farmers from all across Africa to visit the model farm in coming years.In West Africa, negotiations are already underway for an economic cooperation agreement between Israel and over a dozen nations. Many in the region still remember with longing the days when Israelis had a lead role in helping them develop their nations, before these mutually beneficial relationships were severed under pressure from the Arab oil powers after the 1967 and 1973 Middle East wars. In Sierra Leone, for instance, a drive around the capital Freetown would reveal that to this day the parliament, central bank and postal service are all housed in buildings constructed by Israeli firms before the diplomatic breakup.This is all happening at the same time that the Arab/Islamic nations are slowly losing their stranglehold over the regional voting blocs at the UN. This slippage is partly due to the disunity and waning influence of the Arab League in the wake of the Arab Spring and especially the carnage of the Syrian civil war. Another factor is the ongoing discoveries of massive oil and natural gas deposits in non-Arab and non-Islamic countries, diminishing OPEC’s leverage over global decision-makers. A third factor is the discrediting of Islam due to the atrocities being committed by jihadist terrorists.Some Western leaders may be reluctant to identify the problem as radical Islamic terrorism, but many developing nations are not hemmed in by this self-imposed political correctness.So the opportunity is there for Israel to break free of its diplomatic isolation, deal a serious blow to the boycott and delegitimization campaigns, and bust up the Arab monopoly at the UN and its various organs. Besides these diplomatic fruits, many African nations also have incredible natural resources and are just looking for reliable partners to help harvest this wealth for their own people.Too often in recent decades, foreign interests have come in and siphoned off these resources for their own gain, but many Africans now believe the Israelis can be trusted to help them secure their future prosperity.We believe this is a time of great favor for Israel in Africa. Jerusalem needs to respond with all due haste!