Invest now in a plan (not a deal), that will pay off for real instead of mourning a regressive deal. 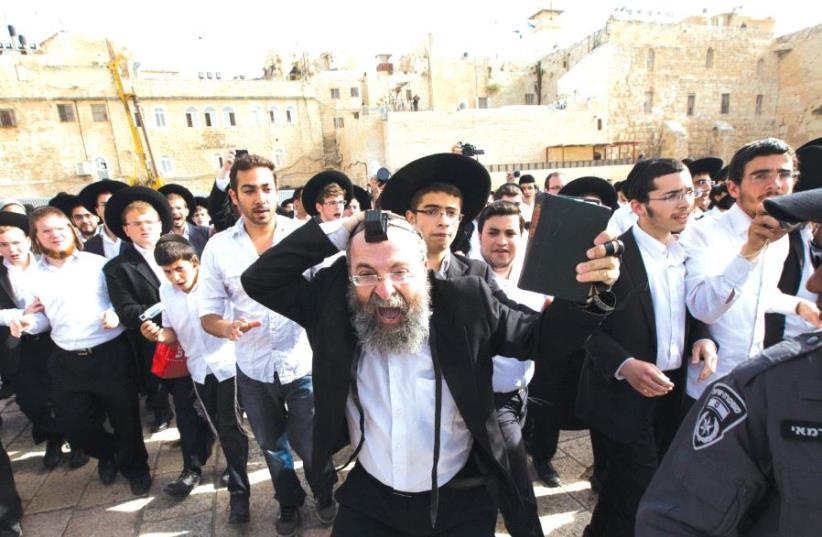 An ultra-Orthodox Jewish man holds a Bible as he protests against a monthly prayer session of the Women of the Wall group at the Western Wall, 2013
(photo credit: REUTERS)
Advertisement
If progressive religious Jews in the US and in Israel want an Israel that respects and understands something other than Orthodox and haredi (ultra-Orthodox) Judaism, they have to build a base of Israelis who have a clue what that is, and a personal stake in it. The deck is stacked against all non-Orthodox/haredi Judaism here: we all know that. It’s time to move on from a bad, indeed, a terrible deal, and do something to change reality here.If you want to see the Orthodox establishment here shake; if you want to see the politicians, who do power balance sheets, not morals, sit up and take notice of you, do this: announce a multi-million dollar program to fund schools here in which progressive Judaism is taught, and general educational excellence is practiced. We need scores of such schools, a vast expansion of the utterly inadequate options that now exist.Do this, and watch what happens in 10, 15 years, as we get cohorts of young Israelis – who vote, serve in elite units in the army which are stepping stones to leadership, who serve in Knesset and run ministries. And their families, for whom progressive Judaism (and decent education) will no longer be foreign ideas – and who also vote. Take a page from the Zionist Orthodox and haredi playbook – in both the US and here: want the future? Educate.This works. Proven.This will create the base for shared discourse and understanding between US and Israeli Jews, and a more progressive Israel. This will take children from the 20% of the population here that lives under the poverty line and give them a future – and a progressive orientation, as opposed to the right-wing and haredi/conservative religious orientation of such populations now. Recall and learn from the words of the previous Lubavitcher rebbe, who visited the US in 1929 from Europe, took sharp measure of the Judaism he saw, and said: “They will build temples, and they will be empty. We will build schools, and they will be full.”Invest now in a plan (not a deal), that will pay off for real instead of mourning a regressive deal which would have vastly strengthened the retrograde haredi establishment here by making the national holy site of the Jewish People, the Western Wall, officially a haredi synagogue. From this Wall, women’s group prayer, enacted there regularly now without incident (see photo evidence on the Facebook page of Original Women of the Wall), would be banned on pain of long jail sentence and heavy fines.The deal was a bad bill of goods, peddled as gold. Ask yourselves why the haredi establishment signed on to it, before they reneged: because it was beyond-belief good for them. The Reform and Conservative movements and the Women of the Wall organization were content to relinquish the Western Wall to them and accept in its stead a site with no historic significance as a place of Jewish devotion: an ersatz site for ersatz Judaism, the haredi establishment said, laughing in its sleeve, while real Jews (them) get the real thing.And those pesky women – the only Jews who have succeeded in establishing non-haredi prayer custom at the Western Wall, with court recognition – they will be banished to the ersatz site, or jailed for persisting in the Jewish claim to this place, which we all thought was established for all time for all of us in 1967.For this deal, you mourn? It’s time for the reset button and a policy that will actually deliver, win – win for all – except the retrograde elements here.It’s an old Jewish idea: Yavneh. It works. We, the Jews, are proof.Now is not the time to disengage, insulted. Just the opposite. Don’t get mad, get wise.The author is Professor Emerita of Jewish studies and history at Oberlin College and teaches at Hebrew University. She is a founding member of Women of the Wall and core activist in Original Women of the Wall, which promotes the founding goals of the group: independent women’s group prayer at the Western Wall. She is a litigant in the Supreme Court case brought by Original Women of the Wall to enforce court rulings on the right of Jewish women to read Torah at the Wall.