If you love American Jewry and want to make sure that our people hold hands across the Atlantic and remain one nation, this pilgrimage is indispensable. 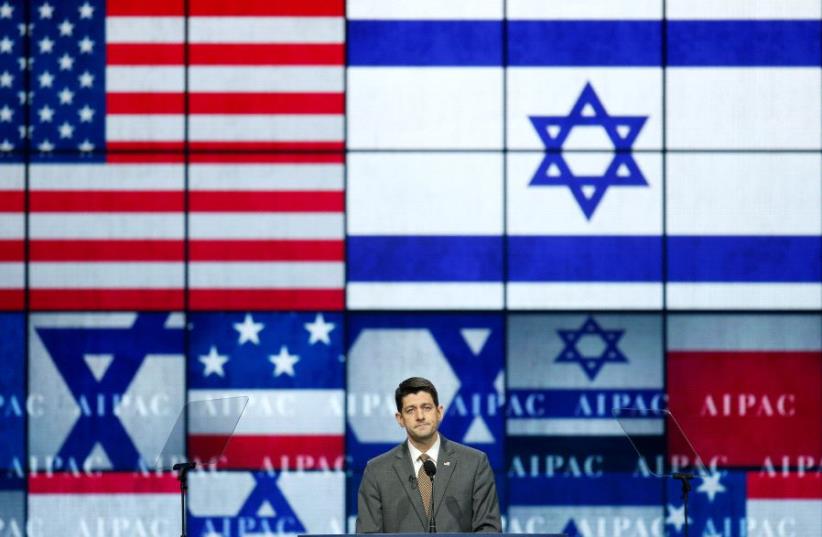 Speaker of the House Paul Ryan (R-WI) speaks to the American Israel Public Affairs Committee (AIPAC) policy conference in Washington
(photo credit: REUTERS)
Advertisement
Last year I wrote about the annual AIPAC Policy Conference and called it the “Fourth Pilgrimage Holiday” or the “American Pilgrimage,” and here I am again reporting on what I saw at the massive gathering of Jews and Israel lovers in Washington, DC.

An Awesome GatheringIndeed, in terms of numbers AIPAC did not disappoint as 19,000 participants showed up, 4,000 of whom were school and university age, and bringing them all together is no small feat. The atmosphere was electric when US Vice President Mike Pence spoke and the crowd went wild when the new US ambassador to the UN, Nikki Haley, told the packed Verizon Center that “there’s a new sheriff in town.”But for me, the real magic was at night, after the official program had ended. Young Jews gathered in bar events run by organizations like Zionist Organization of America (ZOA), The Israel Project (TIP), Stand With Us, Israeli American Council, Students Supporting Israel (SSI) and Young Jewish Conservatives, among others. Beer was flowing, business cards were exchanged, hearts were opening – and the huge ocean that divides Israeli Jews and American Jews dried up like the Red Sea on Passover.Lame MessagingHowever, while the physical gathering itself was inspiring, the messaging of it was, in my eyes, less so. You might have thought this year’s 50th anniversary of the miraculous Six Day War and the triumphant reunification of Jerusalem would have been the overarching theme of the conference. The Six Day War did get a few honorable mentions, including a outstanding movie clip from Christian Broadcast Network, but that’s it. While we all remember the famous AIPACian phrase “Jerusalem will always remain the eternal undivided capital of Israel,” this year the motto was noticeably absent.The neglect of unified Jerusalem at AIPAC was made even more conspicuous in light of the Trump administration’s exploration of moving the US embassy to the City of Gold. But while there was no finer moment to make an appeal to move the embassy than the giant annual pro-Israel gathering in Washington on the 50th year of reunification, alas, the issue was dropped.

Balfour - Not Dead, But Buried Yet another theme which was amazingly absent at AIPAC was the 100th anniversary of the Balfour Declaration of 1917. The key document to the birth of the State of Israel is celebrating its first centennial, precisely as Israel’s international legitimacy is being threatened. Yet the instrument of American pro-Israelism, AIPAC, neglected to so much as mention Balfour. Why? I heard from many insiders that AIPAC decided, in the wake of the divisive political atmosphere in the US, that messaging this year would be parve and inclusive. But to achieve this goal, the Policy Conference sacrificed the opportunity to connect participants to meaningful Israeli history, and lacked a powerful policy vision for the future.Drowning in Water TechOne group which did have passion was the hundreds of protesters, many of them Jewish, who gathered outside the convention and railed against Israel’s “occupation” for the cameras. Yet inside the convention AIPAC’s main argument for the legitimacy of the Jewish state was Israel’s amazing technology – no answer to the recurring claims of Jewish land theft.The peak of this watered-down defense of Israel came as Alan Dershowitz, one of the Israel’s and the Jewish people’s greatest advocates, came out and “sold” the giant AIPAC audience on Israeli technology that distills water from the air. Now, we are all very proud of Israel’s technological achievements, but we don’t need Dershowitz in that role. We need him out there fighting delegitimization, fighting anti-Israel lawfare, breaking up jihadist funding schemes, blocking Iran with sanctions, and of course, giving answers to American Jewish youth on campus.Judea and Samaria at AIPAC Just as the settlers refuse to be cut out of Israeli politics and the Israeli conversation, so too do they want a place at the American Jewish conversation. Therefore, the Council of Judea and Samaria (Yesha), along with other like-minded organizations, hosted an event celebrating the 50th anniversary of the Six Day War, the return to Jerusalem and our ancient ancestral lands in Judea and Samaria, as well as the 650,000 Israelis who now live in these places. Held at the posh “Loft” (and emceed by me!), it featured four Israeli ministers: Housing and Construction Minister Yoav Galant, deputy defense minister Eli Ben-Dahan, minister in the Prime Minister’s Office Tzachi Hanegbi, Israel’s consul general in New York Dani Dayan, and deputy foreign minister Tzipi Hotoveley who said “defense is important and security is important, but the most important thing is the moral claim of Israel.”An energized crowd of 350 participants imbibed award-winning wines of Judea and Samaria, took home samples of Ahava skincare products from the Dead Sea and were served as much DC sushi as they could eat. Many attendees told me afterwards that this was the highlight of their AIPAC experience. Maybe it was simply because we created a space for people to express their love of the land, their pride in the Six Day War and their appreciation of the right of Jews to be strong, without reservation.A Bad Guy We Can All Agree On Get

At AIPAC 2017, the inclusive big-tent no-conflict atmosphere actually made it so that the traditional bad guys got a kind of pass. However, it was nice to see that there was one enemy which could penetrate the no-conflict milieu, an enemy we can all get behind fighting: the endemically antisemitic UN. With UN ambassador Haley unabashedly taking on that diseased organization, Israel’s ambassador to the US Ron Dermer stated that moral clarity is finally going to come to the UN. It was precisely these moments where a fight for Israel was identified that AIPACers brought the house down.

Get Some Israeli Wine

Before the main conference itself, over a thousand participants gathered in Washington for the AIPAC Shabbaton. The Shabbat was fun (though the toilets were all electric flush) and the talks were, for the most part, thought provoking. However, once again, we were served cheap kosher non-Israeli wine. I wrote last year, and I say it again: the pro-Israel lobby should be serving wine from the Holy Land. It’s a simple way to support Israel and to connect to the land on a bodily level. And it tastes good too.Passion Still Rules This year’s Policy Conference was wonderfully organized but lacked passion. But passion for Israel is what will capture the hearts of the next generation while a lack of passion will lead them into the clutches of J Street and its ilk.I have already registered and paid for next year’s AIPAC conference, and with the help of God I’ll be in attendance. If you love Israel, AIPAC is an certainly an important gathering – but if you love American Jewry and want to make sure that our people hold hands across the Atlantic and remain one nation, this pilgrimage is indispensable.The author is international spokesman for the Jewish Community of Hebron.
Advertisement
Subscribe for our daily newsletter