Based on the publication of its first issue, al-Risala seems to be the first sign in al-Qaida’s effort to revive its reputation as the leader of the global jihadist movement. 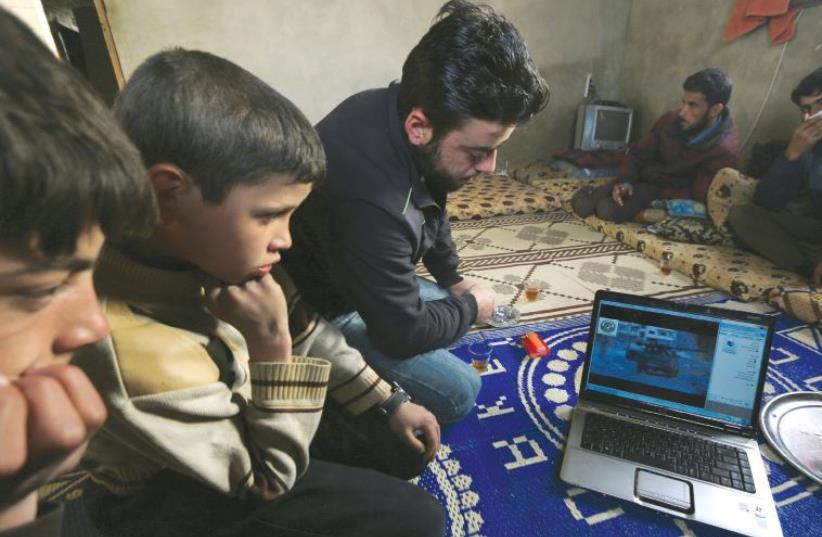 A boy in Syria watches a video on a laptop.
(photo credit: ILLUSTRATIVE/KHALIL ASHAWI/REUTERS)
Advertisement
Over the last year, al-Qaida’s status in the world media suffered a severe setback.This fact was evident in several ways. A simple Google search of al-Qaida and ISIS in English reveals the media gap between the two jihadist organizations, in which Islamic State clearly comes on top with 240,480,000 results, compared to al-Qaida’s 50 million results.Furthermore, in a recent interview to The Guardian, Abu Muhammad al-Maqdisi and Abu Qatada al-Filistini, two of the leading ideologists of the global jihadist movement, harshly criticized the conduct of the Islamic State, but admitted that Islamic State has beaten al-Qaida in the propaganda war. Due to its sophisticated global media strategy, Islamic State manages to reach today a far wider audience than al-Qaida. Given this context, it is easy to understand al-Qaida’s last propaganda move with the publication of the first issue of a new online magazine, al-Risala (“the message”). The magazine, which is produced by al-Qaida in Syria, is published in English and was recently posted in jihadist social media accounts.
See the latest opinion pieces on our page
Al-Risala is presented as “the official magazine of the mujahideen in Bilad ash-Sham [Greater Syria]” and is sleekly designed. In its high production value, in contents and design, the new magazine looks very similar to Dabiq, Islamic State’s English-language online magazine that was first published in July 2014, after the group declared the establishment of an Islamic state.
Dabiq’s 10th issue is supposed to be published soon, and will probably focus on glorifying the achievements of the Islamic State.Based on a content analysis of the first issue of al-Risala and the topics it covers, it is clear that al-Qaida and its Syrian affiliate, Jabhat al-Nusra, decided to fight for Salafi-jihadist global public opinion by waging an assertive media battle in the central contemporary arena that exists today in the global jihadist movement.For this reason, a considerable part of the publication is dedicated to the events in the Syrian arena, in order to present to its readers “credible and reliable news from people who actually witness the events unfold on the ground and front lines.”The magazine presents to its readers Jabhat al-Nusra’s achievements, along with its partners in Jaysh al-Fath (“Army of Conquest”) – a coalition of seven jihadist organizations which cooperate with each other to liberate Syria from the regime of President Bashar Assad, and work together to battle the Islamic State in Syria.Al-Risala has a sleek visual design, with colorful headlines and high-quality images. This includes visual references to Hollywood action movies that its target audience is presumably well acquainted with, exactly as Islamic State does in its English language media products. Special emphasis is given in al-Risala to ridiculing Islamic State and minimizing its achievements, and in contrast to glorifying al-Nusra’s victories in the ongoing war in Syria. For instance, Islamic State’s senior leaders are presented as former members of Saddam Hussein’s secular Ba’ath regime, instead of pious Muslims that are striving to implement Islam, as the Islamic State claims to be doing.In order to highlight the global jihadist character of the magazine and its relation to al-Qaida’s affiliate network, the magazine dedicates a eulogy to Nasser al-Wuhayshi, the leader of al-Qaida in the Arabian Peninsula who served as Ayman al-Zawahiri’s right-hand man and was killed in an American drone strike in mid-June.The eulogy obviously emphasizes the well-known motif of al-Qaida and its affiliates of the glorification of martyrdom of its leaders, which sanctify in their deaths the struggle in the path of God (al-jihad fi sabil Allah) as the Koran commands the believers.Based on the publication of its first issue, al-Risala seems to be the first sign in al-Qaida’s effort to revive its reputation as the leader of the global jihadist movement.It would be no less interesting to see when Ayman al-Zawahiri, the leader of al-Qaida who has been silent for many months, will also make his voice heard in al-Qaida’s propaganda battle against the Islamic StateYoram Schweitzer is the director of the Terrorism and Low-Intensity Warfare Research Project at the Institute for National Security Studies (INSS) and Adam Hoffman is a PhD candidate who interns at the project.