Aliya: Now more than ever

France is only a drop in the bucket. 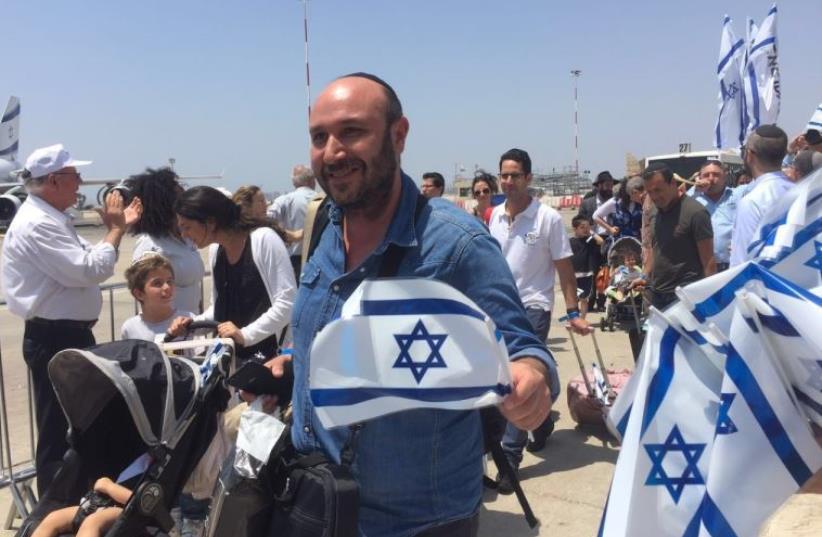 Largest French aliya flight of the summer lands in Israel, July 20, 2016
(photo credit: TAMARA ZIEVE)
Advertisement
Last Thursday night, as a terrorist rammed his truck into a crowd celebrating Bastille Day in the coastal French city of Nice, killing 84 people, a handful of the city’s Jews were meeting a block away with a representative of our organization, the International Fellowship of Christians and Jews, to discuss their future – in the State of Israel.These Jews of Nice are among 500 French Jews who will be starting new lives in Israel this summer amid intensifying anti-Semitism and radical Islamic terrorist attacks in France, from the Hyper Cacher attack in Paris last year to Nice last week. For three months we have been speaking to Jews, who say life for Jews is becoming untenable in France. One family that lives in the 19th arrondissement of Paris tells us their children face daily attacks at their Jewish day school. Another family talks about being afraid to wear kippot or other symbols of their Judaism in public. It’s a story we hear over and over. In the short time we’ve been facilitating aliya flights from France, we’ve fielded more than 5,100 inquiries from Jews from the country about moving to Israel.France is only a drop in the bucket. Since January, we have brought to Israel more than 700 Jews facing economic and security challenges from Bolivia, Brazil, Uruguay, Venezuela, Turkey and Ukraine – and we continue to hear from Jews in those countries and elsewhere, who see their future in the Jewish homeland.In fact, despite what we’ve heard in Israel for a few years, the need for facilitating a strong aliya worldwide is as acute as it’s been in years. From Latin America to Western Europe to the former Soviet Union, Jews face deepening anti-Semitism and rising Islamic terrorism. In November 2014, after a 20-year partnership supporting aliya with the Jewish Agency, the Fellowship formed its own aliya department. Contrary to the popular notion that the heyday of aliya is behind us, the need to help Jews facing challenges across the Diaspora is growing by the day.The Ukraine civil war underscored the existence of this new wave of aliya. Overnight, one of the largest Jewish communities in the world sank into a deep economic crisis that continues to this day. The fighting that started in eastern Ukraine created, for the first time since World War II, a situation in which thousands of Jews were forced to flee their homes with nothing. By the end of 2015, we’d helped bring 2,000 war-weary Ukraine Jews to Israel, and the demand continues. On July 26 we will be bringing 250 more Jews from Ukraine – the latest in a series of such aliya flights that have continued throughout this year. Since the early 1990s we have spent more than $188 million to bring to Israel thousands of Jews from Ethiopia to Moldova, and we are continuing our efforts.Israel must readjust to this new global landscape. But we must also recognize that simply bringing Jews out of distressed lands home to the Promised Land is not enough.We must invest in each and every oleh and ensure that their absorption and assimilation into Israeli society becomes a success story. In fact, for many Diaspora Jews – even for those whose lives have grown increasingly untenable – the main obstacle to making aliya is their fear that they will not succeed in reestablishing their lives in Israel, especially regarding employment and housing.We provide every new immigrant with social and economic support that guarantees a soft landing during their first months in Israel. We provide every family with a grant of $1,000 per adult, and $500 for every child under the age of 16. This is in addition to the absorption basket provided by the government. We make sure that every family that comes to Israel with us has a housing solution, assistance in finding a job and medical aid.No new immigrant is alone. Our average investment is $3,500 per person. This is in stark contrast to new immigrants who only receive a ticket to Israel, but are left to cope on their own. Today, there is a blessed effort of the State of Israel to improve aliya and absorption, and we are ready to assist as much as needed. We believe that the key to encouraging aliya is smooth absorption that ensures the welfare of every new immigrant.So far in 2016 we have already brought almost 5,000 Jews from 15 countries to Israel, and we continue to bring more. Of the new French olim we are assisting, half are children whose parents see Israel as their best hope for a brighter future. We must stand with them, every step of the way. We cannot let them down.Rabbi Yechiel Eckstein is the founder and president of the International Fellowship of Christian and Jews. Since its founding in 1983, IFCJ has raised more than $1.3 billion to tackle social, welfare and emergency needs