Settlements are apparently a very important strategic asset in Netanyahu’s eyes. So much so that strengthening the Jewish hold in Judea and Samaria is worthwhile and a cardinal Israeli interest. 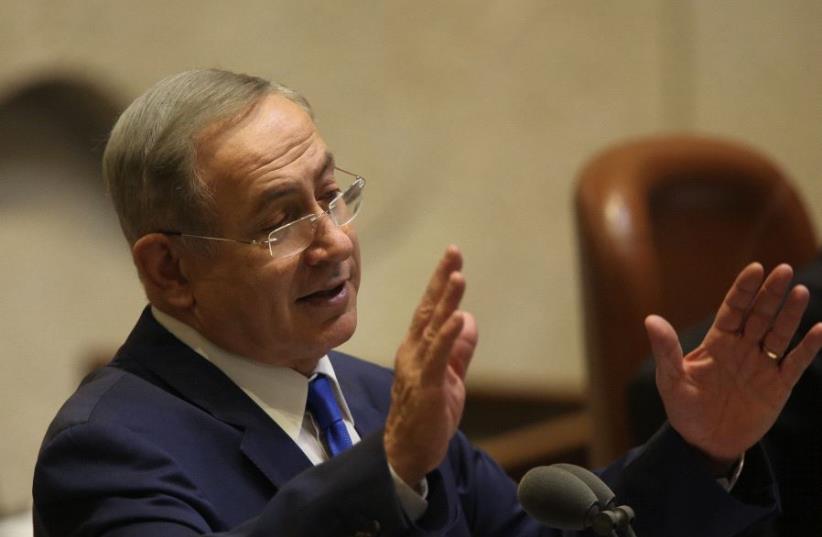 Benjamin Netanyahu
(photo credit: MARC ISRAEL SELLEM)
Advertisement
What has been pushing Prime Minister Benjamin Netanyahu to support the so-called “settlement regulation bill”? One possibility is that he truly believes – despite all its problematic aspects and the international fallout it will cause – the legislation is essential to advancing Israeli interests in the West Bank.Settlements are apparently a very important strategic asset in Netanyahu’s eyes. So much so that strengthening the Jewish hold in Judea and Samaria is worthwhile and a cardinal Israeli interest – even after factoring in all the negative side effects of the bill. Until now, America, Israel’s most important ally, was led by a man who opposed the expansion of Jewish settlements in the West Bank. But now there is a new man in the White House who – we are told – seems to not see settlements as an obstacle to peace.The other possibility is that Netanyahu is secretly opposed to the bill, but knows he would be weakened politically if he opposed it publicly. He is therefore hoping that the High Court will intervene to declare the law unconstitutional.This would be a win-win situation for Netanyahu from a political point of view. He could retain his right-wing credentials in the eyes of his Likud constituents and ward off challenges to his leadership from within his party, from Bayit Yehudi head Naftali Bennett or Defense Minister Avigdor Liberman. At the same time, legislation that he opposes would be annulled.And there is a good chance the High Court will strike down the law.Passage of the bill deviates from decades of settlement policy that distinguished privately owned land from state land. That policy was set by former prime minister Menachem Begin, after the High Court ruled in the 1979 Eilon Moreh case that civilian settlements built on privately owned Palestinian land are illegal, unless there is specific military justification for them.Ever since, settlement policy in both Labor- and Likudled governments has been to refrain from building on privately owned land or to evacuate illegally built property.The rationale behind the policy was clear: Expropriation of privately owned Palestinian land to build private homes for Jews constitutes a breach of the 1992 Basic Law: Human Dignity and Freedom that protects basic rights – including property rights – regardless of religious affiliation, race or creed. Israel is both Jewish and democratic, after all.This is also the first time an Israeli government is promoting legislation that aims to regulate land acquisition laws in Judea and Samaria, which are outside Israeli jurisdiction.Unlike east Jerusalem and the Golan Heights, which Israel has officially annexed, the West Bank remains “disputed” territory, according to official Israeli policy. The state has consistently refrained from expropriating privately owned Palestinian land. Now it appears to be taking this step.So, is Netanyahu betting on the High Court to rescue him from the international community accusing Israel of de facto annexation of the West Bank? Or does he believe that the settlement regulation bill is important enough to justify the risk of criticism and sanctions from the International Criminal Court (particularly with Donald Trump in office)? Is it worth deviating from decades of settlement policy? Does it justify amending the Basic Law: Humanity Dignity and Freedom, if necessary? The truth is that Netanyahu’s position on the legislation is unknown. We do not know for sure what is motivating the prime minister to support it, because there is no clear policy regarding the future of the settlement enterprise.If Netanyahu supports annexation of the West Bank, he should say so. If he believes that the Basic Law should be amended to allow for the expropriation of Palestinian land, he should say so. He should share with us his vision for the future of Israeli-Palestinian coexistence and his plans to achieve that vision, instead of supporting ad hoc steps that leave underlying policy goals ambiguous.If, on the other hand, he opposes the legislation, he should stand up and say so.Relying on the High Court to save him from political damage is not the way to set government policy. It also weakens an already embattled institution that is central to maintaining Israel’s democratic character.