American Jews must stand with Israel against its enemies

We stand with Prime Minister Netanyahu who said in a recent cabinet meeting, “We will gather forces in Israel and around the world to shatter the lies of our enemies." 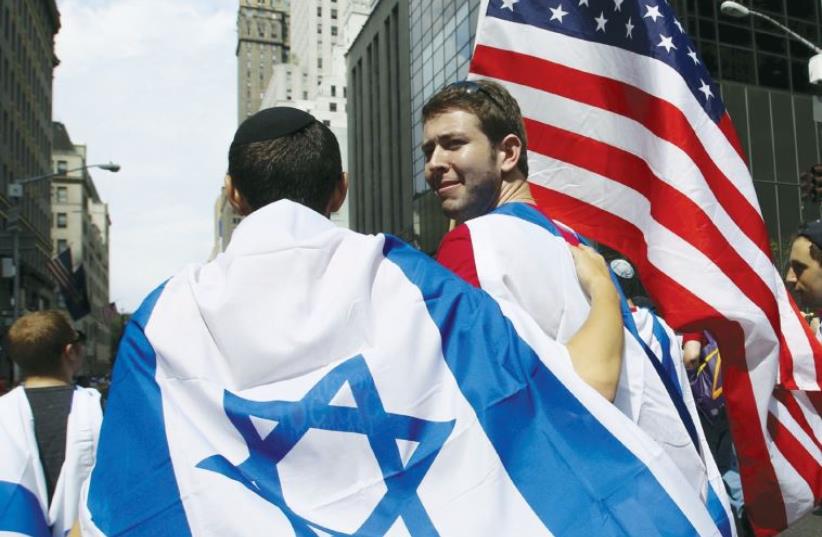 People take part in the 51st annual Israel parade in New York in May.
(photo credit: EDUARDO MUNOZ / REUTERS)
Advertisement
19th century philosopher Max Nordau once reportedly told Zionist leader Ze’ev Jabotinsky that “the Jew learns not by way of reason, but from catastrophes. He won’t buy an umbrella merely because he sees clouds in the sky. He waits until he is drenched and catches pneumonia.”Israel today faces many dangers – an Iran nearing full nuclear capabilities, Islamic State close to its tiny borders, Hamas devoted to its destruction, a hostile United Nations, as the worldwide Jewish community faces an anti-Semitism unprecedented since World War II.Meanwhile, the American Jewish community sees overwhelming assimilation and intermarriage, a reported two-thirds of Jews do not belong to a synagogue – and yet so many in the American Jewish community respond to the clouds facing the Jewish people by giving money to the New Israel Fund, an organization devoted to harming Israel.NIF raises $30 million annually from American Jews – to pursue an agenda which involves advocating and working on a boycott against Israel, weakening the Israel Defense Forces, both on the ground and via “lawfare,” and through various other mechanisms, including advocating for terrorists’ families and collaborating with the United Nations to attack Israel. If it harms Israel, count on the NIF to be part of it. Yet, in the face of catastrophe there are those standing with the enemies of the Jewish people.That’s the way so many in the American Jewish community have chosen to respond to the catastrophes the Jewish people face.As communications professionals – and proud Jewish-Americans – we support Prime Minister Benjamin Netanyahu who said we must said stand together to “fend off the attackers” pushing for a boycott of Israel. As Netanyahu noted, “As far as those leading the boycott calls are concerned, the settlements in Judea and Samaria are not the focus of the conflict, but rather our settlements in Tel Aviv and Jaffa, in Haifa and Jerusalem.”We have different political opinions, but across the political spectrum in Israel – from Labor to Likud, Bayit Yehudi to Yesh Atid – on the issue of boycott and the IDF, we must stand together. As Netanyahu said, we as supporters of Israel must stand, “Against attempts to attack Israel with lies, false accusations and boycotts, we must line up – Right and Left – to rebuff the pressure, expose the lies and attack those who attack us.”With all going in the world, we ask how can American Jews fund the enemies of Israel? How can they fund campaigns that weaken the Israel Defense Forces and support a boycott of Israel? To Alisa Doctoroff, president of UJA-Federation: stop giving money now.To Karen R. Adler, and The Jewish Communal Fund: we urge you to serve the interests of the Jewish people and say “No money to organizations that harm the Jewish community.”To foundations like The Jim Joseph Foundation, the Russ Berrie Foundation & The Leichtag Foundation who do so much positive work in so many areas of the community, we say: review the work of Alma Biblash, the executive director of the Human Rights Defenders Fund (HRDF), an organization to which the NIF authorized grants worth $332,625 from 2011-2013. She has called Israel “racist” and “murderous” and described the country as a “temporary Jewish apartheid state.” Biblash supports Boycott, Divestment and Sanctions (BDS) campaigns and promotes the Palestinian Arab “right of return.” You are partners with her work. Is this what your foundations wish to be known for? To a six-figure NIF donor, the Lisa and Douglas Goldman Fund: you give money to the Friends of Israel Defense Forces, a great organization – how can you also fund the NIF which harms the IDF so much? As deputy Knesset speaker Yoni Chetboun said, “The main goal of the NIF is to undermine the Israeli army, by knowingly financing left-wing Israeli groups that try to get young Israeli soldiers prosecuted for war crimes.”To the Stella and Charles Guttman Foundation, who believe in “Arab-Israeli co-existence,” we say: the Jewish people all strive for peace and co-existence. Stop funding extremist organizations like NIF who do not recognize that Israel must remain a Jewish state.The extremists of the NIF must be countered, and those who write checks must be challenged. Israel is in the midst of an unprecedented storm.Simply we stand with Israel. Today, we stand with Prime Minister Netanyahu who said in a recent cabinet meeting, “We will gather forces in Israel and around the world to shatter the lies of our enemies, and we will fight for Israel’s right to live in peace and security, to live at all.”Hank Sheinkopf, CEO of Sheinkopf Communications, is a leading political strategist who has worked on campaigns in four continents. His clients have included former President Bill Clinton. Ronn Torossian is CEO of a top 20 US PR agency, and author of For Immediate Release. George Birnbaum is a former chief of staff to Prime Minister Benjamin Netanyahu.