An insult to the Ethiopian Israeli community

There are ongoing issues surrounding the status of Ethiopian Israeli religious leaders, such as the question of affording the Kessim more recognition and government support. 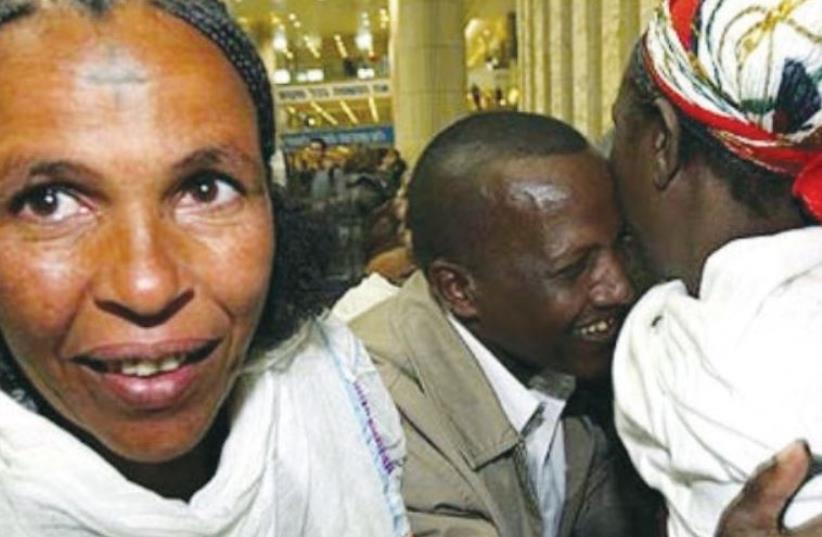 Ethiopian immigrants greet family members in 2010
(photo credit: BRIAN HENDLER)
Advertisement
Earlier this week, the Religious Affairs Ministry announced it would not renew the contract of Ethiopian Israeli Chief Rabbi Yosef Hadane, then back-pedaled rapidly after an immediate outcry that included objections from no less than Ashkenazi Chief Rabbi David Lau. But the ministry didn’t back-pedal very far. It offered Rav Hadane only a six-month extension, and told him bluntly not to get his hopes up for any further extension.Rav Yosef Hadane is a senior religious leader – the first Ethiopian Israeli to become an ordained Orthodox rabbi in Israel – who has worked for nearly half a century to bridge the differences between Ethiopian Jewish religious leadership and practices and the entrenched Israeli rabbinate.He has taken criticism from all sides over the years for being either too outspoken or not outspoken enough.In Sunday’s media stories, spokespersons from the ministry stated outright that his contract was not being renewed – as would routinely be the case for other senior rabbis – because Rabbi Hadane had criticized the Petah Tikva rabbinate and its discriminatory practices against Ethiopian Jews.In the 1970s and ‘80s, our group – then the American Association for Ethiopian Jews (AAEJ), now Friends of Ethiopian Jews, Inc. – advocated relentlessly for the rights of Ethiopian Jews to freely emigrate to Israel – the land of their dreams and aspirations.We stood shoulder to shoulder with Ethiopian and Soviet Jews as they fought brutal regimes for their right to make aliya and join the Jewish people in the Jewish State of Israel.We worked with Kes Raphael Hadane, and knew his young son Yosef. We watched Yosef Hadane make the then controversial choice to become an ordained Orthodox rabbi in Israel rather than continue on as solely a Kes, and watched him take criticism from his own community.We were directly and deeply involved in Operation Solomon – 30 hours in which 14,210 Ethiopian Jews were airlifted from Addis Ababa to Israel, without the loss of one Jewish life. On the contrary: one child was born on the flight. It was Israel and the Jewish people at their best.Now, some 25 years after Operation Solomon, we are deeply disturbed by the ministry’s firing of Rabbi Hadane.He is the only Ethiopian rabbi in the ministry, and why was he dismissed? Because he protested discrimination against Ethiopian Jews whom the Petah Tikva rabbinate had refused to marry.In the late 1980s we stood and protested with the Ethiopian Kessim – traditional religious leaders – outside the Knesset. The demonstration was over the fact that the rabbinate at the time was demanding “hatafat dam,” a ritual symbolic drop of blood that shows that circumcision had taken place, for men, and a visit to the mikvah for women to demonstrate that they were truly Jews. The community rebelled and for the first time in history the rabbinate backed down.Now more than 30 years later, with a population of 140,000 Ethiopian Jews in Israel, the rabbinate still insists on discriminatory practice when it comes to marriages. The Beta Israel community that has kept their religion and traditions for more than a thousand years continues to be put into question by a close-minded rabbinate.And Rav Hadane spoke out against it, clearly and emphatically.There are ongoing issues surrounding the status of Ethiopian Israeli religious leaders, such as the question of affording the Kessim more recognition and government support.And why aren’t there more Ethiopian rabbis in the ministry? There are numerous problems regarding the rabbinate’s treatment of Ethiopian Jews and their traditional religious leaders and their positions – or lack of positions – in the institutionalized religious and quasi-governmental channels in Israel.Rabbi Hadane has navigated these channels for a long time, trying to act as a mediator to all sides. It is his right – and his duty – as a rabbi and leader to speak out when he believes injustice is being done, as he did in the case of the Petah Tikva rabbinate.Rav Hadane is the Ethiopian Israeli chief rabbi. For the Chief Rabbinate to refuse to renew his contract, when this is routinely done for other rabbis, screams of outright retaliation for his views. It is outrageous and offensive, and it is wrong.Now, to offer him only a six-month extension of his contract is further insult. It demonstrates a lack of respect for both Rav Hadane and the Ethiopian Israeli community.Rav Hadane’s contract should be renewed immediately for at least five years. When the time does come for him to retire, it should be done with the appreciation, ceremony and respect due to all important community and religious leaders.BARBARA GAFFIN co-authored this op-edThe writers are members of Friends of Ethiopian Jews, Inc., www.friendsofethiopianjews.org