An open letter to Breaking the Silence 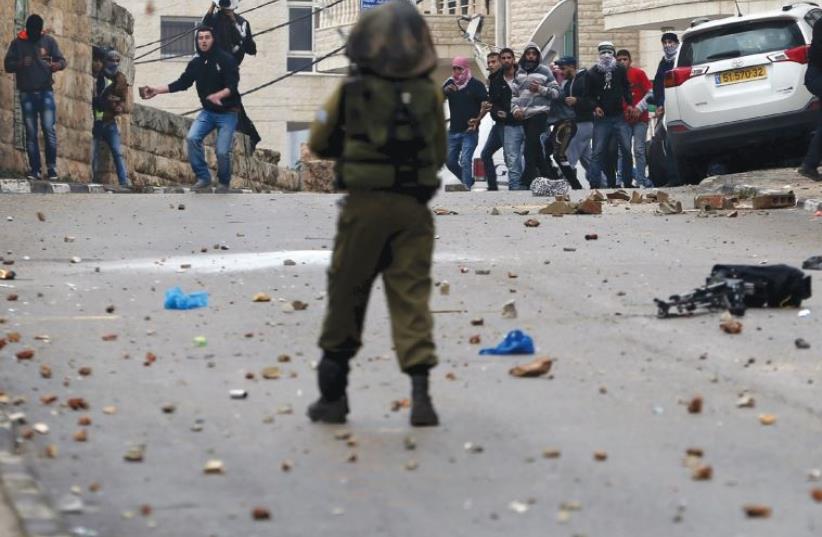 Palestinians hurl rocks at IDF soldiers during clashes in Ramallah
(photo credit: REUTERS)
Advertisement
Dear Breaking the Silence,I too served as an infantryman in the West Bank, Lebanon, and the Gaza Strip during the disengagement. I too served in Nahal, in what was probably the most left-leaning company in the army at the time, until I finished my operational training.I have continued to serve Israel in various capacities, abroad and here in Israel, since my discharge in 2007.I have read your various posts and “testimonies.”If you saw someone get hit for “no reason,” why did you not speak out then? If you thought that your actions were immoral why did you not have the intestinal fortitude to report them to your commanders and officers? Why did you wait years to tell stories to audiences abroad? Stories that include a lot of hearsay, jumping to conclusions, lack of knowledge regarding the incidents in question... I could go on, but you get my point. The stories you tell seem to have little basis in the reality that I remember.I remember being told in every briefing that all civilians were to be treated with respect, that in case of a firefight we were to avoid returning fire if there were civvies in the area. I remember going into Lebanon and running out of food and being told that we were not allowed to touch the food stores in the houses we were in, that rule only being broken after realizing that we wouldn’t make it back to Israel on foot on a starvation diet (I lost between 4-8 kg. that week).I remember officers telling soldiers not to sleep on the beds and mattresses or damage anything unnecessarily – this in houses with tank-shell holes in them. I remember the civilians that we would give food to in Hebron – until we realized that they were carrying out recon on us and that their brothers would throw rocks at us after they left.Why do you rail against soldiers (your own brothers- in-arms) who carry out missions in extremely complex areas of operation which are 100 percent legal according to international law? There is nothing “Nazi-like” about conducting routine checks at checkpoints for explosives and/or weapons, nor is there anything wrong about setting up mobile checkposts in known “hot areas.” There is certainly nothing wrong about arresting members of terrorist cells in the middle of the night. These are all things done by any sensible military force finding itself in the same situation.I will tell you why: You are not an organization that seeks to make the IDF a more ethical fighting force.If you were, you would work with the chain of command to find and punish those who do not uphold the ethics and commands of the IDF, without garnering media attention and demonizing the entire army. You are an organization whose sole purpose is the demonization of Israel in the US and Europe.I can respect those who disagree with me, but not those who undermine democracy by running to other countries and telling exaggerated stories about us in order to salve their conscience for something they may have done or witnessed when they were young and had no moral backbone.I too have broken my silence.The author is an American immigrant working in the Israeli security forces.