An open letter to Richard Gere

I searched Google to find what you had to say, Mr. Gere, about the massacres in Syria, and found nothing. 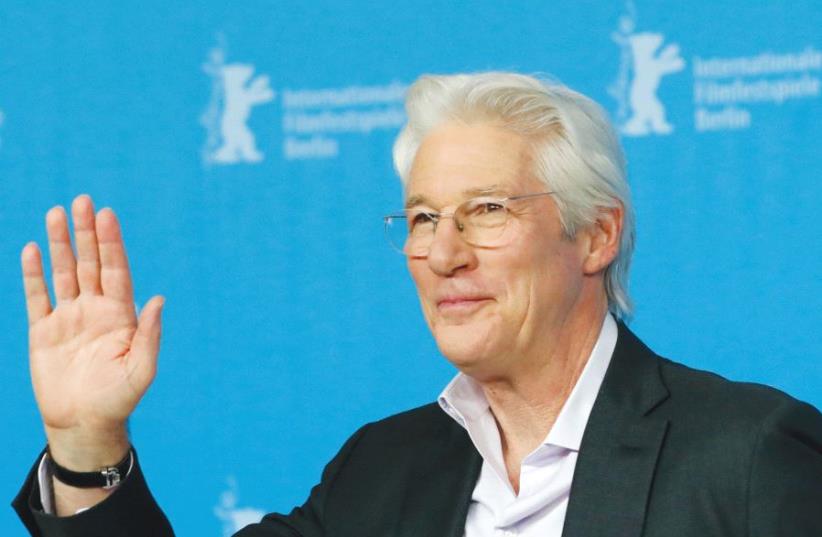 Richard Gere poses during a photocall to promote the movie ‘The Dinner’ at the 67th Berlinale International Film Festival in Berlin last month
(photo credit: REUTERS)
Advertisement
Dear Richard Gere,It is an honor to have you visit Israel despite your hesitations and the pressure put on you by your so-liberal friends, to whom Israel and its West Bank settlements are the epitome of evil and must be fought day and night to make the world better.It is most instructive to learn how a Hollywood celebrity and wonderfully talented actor like yourself intends to revivify the long-dead Middle East peace process. As a famous, dedicated peace lover Gere you came to share with us your (embarrassingly trite) insights about Jewish culture and (factually wrong) advice about how to make peace.
Richard Gere at the Jerusalem Cinematheque in March, 2017. (Reuters)
Your well-intentioned road to peace, Mr. Gere, is paved however with some untruthful assertions, like “the occupation destroys everything,” when in fact Israeli occupation, from 1967 to the 1987 intifada, was a great humane success for the occupied Palestinian.Yes, occupation is not pretty, but it happened because the Arabs once again ganged on Israel in an effort to destroy it. Israel had no recourse but to beat them or to perish, and liberated the West Bank from their occupation.Under Jordanian occupation the Arab inhabitants of the West bank were oppressed, denied any human rights and made dirtpoor. Under Israeli occupation they enjoyed the rule of law and so many other benefits so that their standard of living quintupled. Agriculture and small industry were revolutionized and thrived, seven institutions of higher learning were established where none existed before.Rigid, oppressive Arab Muslim culture, where women are habitually murdered for dishonoring their family by taking to a stranger, was somewhat opened by contact with Israel, so that the status of women, children and minorities improved dramatically. There was no terrorism. I know that human welfare and the betterment of Arab life does rate in your and your friends’ eyes as high as political correctness and the belief that occupation is the essence of evil, but let us at least honor facts by mentioning them.Alas, the Oslo “peace accords” that you would have Israel emulate put an end to this humanely beneficial process when it foisted Yasser Arafat and his terrorist PLO gangs on the hapless West Bank inhabitants. Arafat first terrorized Israelis who ate and shopped in West Bank cities, providing a third of Palestinian GNP, and disrupted all economic relations, thus creating poverty and causing high unemployment (reaching 30% among the young) that he exploited to foment rage and terrorism against Israel.The Palestinian Authority that you would have us upgrade to a state is an utterly dysfunctional clan-based coalition made up of murderous political mafias. It deprives the Palestinians of even their most elementary rights, robs them of billions in aid from the US and Europe, keeps most of them in penury and misery, oppresses and persecutes women, gays and lesbians and all who aren’t Muslims. It foments rage against Israel by incessant incitement that calls on even small children to kill Jews everywhere. Is granting it statehood, as you ignorantly recommend, really the path to peace? How can you, a man who cherishes human rights, who claims that he cares for the oppressed Palestinians, believe that subjecting them to greater oppression by their own tyrants is justified just so that they can enjoy a putative political “self-determination” – the kind enjoyed by the citizens of Saudi Arabia, Libya, Syria, Iraq, Yemen, Pakistan, or Iran? You are also dead wrong, Mr. Gere, when you refer to settlements built on Arab land as “against international law.” The West Bank was part of the mandate given by the League of Nations to Britain to establish there “a Jewish National home.” The Arabs, who received 98% of former Ottoman territories, agreed. In 1948 when Jordan joined five other Arab armies to destroy Israel it conquered and illegally annexed the West Bank. By international law, then, the Jewish claim to these mostly government-owned West Bank lands is still paramount and Israel is legally free to exercise it now that it ejected the Jordanian usurpers.I searched Google to find what you had to say, Mr. Gere, about the massacres in Syria, and found nothing. Not surprising, considering that your peace-loving, human-rightszealous friends in Hollywood and elsewhere did not mount a single demonstration, or issue one strong statement demanding an American intervention to stop Syrian-Iranian ethnic cleansing, the slaughter of hundreds of thousands, the old, the weak, women and children. Like you, Mr. Gere, they were apparently too busy condemning “the settlements” or cynically exploiting the refugee’s tragedy to try and undermine President Trump.The author is the president of The Israel Center (www.icsep.org.il).