When it comes to combating the latest anti-Semitic meme/scheme, it will be up to American Jews to lead the way in expanding our relationships with our African American neighbors. 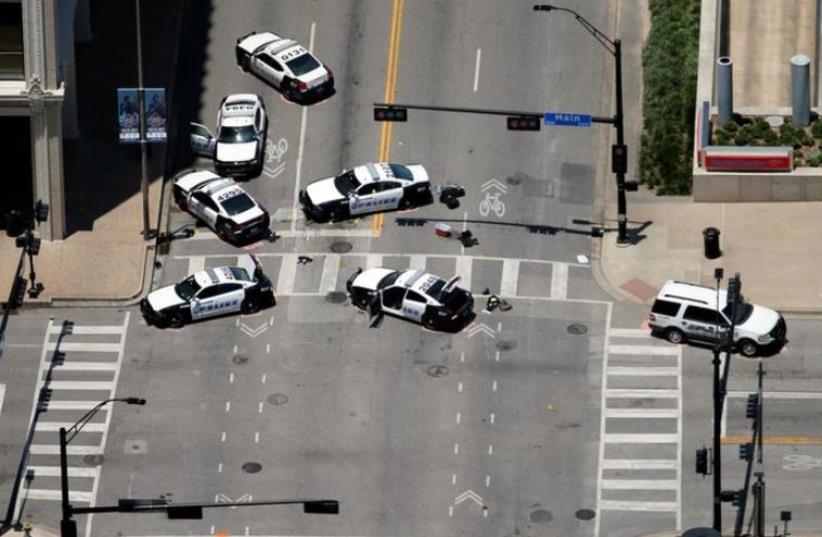 Law enforcement personnel investigate a mass shooting scene at El Centro Community College at the intersection of N Lamar St. and Main St. after an attack which killed and wounded Dallas police officers, in Dallas, Texas, U.S., July 8, 2016.
(photo credit: REUTERS)
Advertisement
All politics are local” goes the age old political adage. But in the era of social media, “local is global” is more the operative term.Globally, America’s friends and foes alike are watching in shock as America staggers from the latest rounds of deadly police confrontations with blacks and the assassination of five police officers in Dallas by a revenge-seeking African American.Incredibly, there are those determined to harness and link black rage at perceived racism at home with the Israeli-Palestinian conflict.A new meme by New York University’s( NYU) Students for Justice in Palestine (SJP) alleges that Israel has African American blood on its hands. Under the hashtag “#No Justice No Peace #From Gaza to Baton Rouge” – they accused Israel of responsibility for the shooting death in front of a convenience store by the police in Louisiana of an African American man Alton Sterling. An SJP post suggests that Sterling is the American equivalent of Ali Dawabsheh, a Palestinian baby killed in the West Bank.SJP is already notorious for its history of harassing Jewish students on the NYU campus – including serving them with fake eviction notices. But it has reached a new low by libeling Israel in connection with the new controversies over police shootings of African Americans in Louisiana and Minnesota. (The Wiesenthal Center has supported calls for a Justice Department investigation of the questionable police shooting of black motorist Orlando Castile in St. Paul, stopped for a defective tail light.) There is even a new academic theory behind the revived blood libel against Jews and Israel for alleged police brutality against African Americans. It’s “intersectionality,” or that all of the 21st-century world’s evils somehow connect back to the founding of Israel and the Jewish state’s attempt to defeat terrorist genocide against it. Here’s one example from the Facebook Page the New York City SJP announcing participation in 2015’s Million Student March against college tuition hikes: “The Zionist administration invests in Israeli companies, companies that support the Israeli occupation, hosts birthright programs and study abroad programs in occupied Palestine, and reproduces settler-colonial ideology throughout CUNY through Zionist content of education.While CUNY aims to produce the next generation of professional Zionists, SJP aims to change the university to fight for all people’s liberation.”The roots of this screed can be traced back to two years ago this summer. The flashpoint came when an 18-year-old African American man who had lunged for the gun of a white police officer in his patrol car was shot and killed on the street. The officer was subsequently exonerated by a grand jury, but Ferguson, Missouri erupted in a week of race riots.Soon after, Sixties Black Power activist Angela Davis delivered a lecture at University of California Santa Cruz entitled “From Ferguson to Palestine.” That launched the campaign to affix an American tragedy to the Israel/Palestinian conflict. Some in the emerging Black Lives Matter movement linked Israel’s self-defense against terrorist onslaughts from Hamas-controlled Gaza to police killings of black men in America.Hamas operatives in Gaza took time out from their rocket barrages against Israel civilians to post selfies announcing their solidarity with Ferguson rioters. Palestinian militants organized on St. Louis campuses were actually bused to Ferguson where they carried signs blaming the Jewish people for the alleged crimes of Ferguson police, a few of whom had once visited Israel.No doubt after Louisiana, St. Paul and Dallas we can expect renewed attempts from SJP-types seeking to leverage outrage and angst over the American racial divide for their cause of ridding the Holy Land of Jews. By cynically seeking to connect imaginary dots between two real conflicts, these fanatics seek to create more hate, divisiveness and distrust between two communities who should be natural allies in the struggle for human dignity.Ironically, all this takes place just as Prime Minister Benjamin Netanyahu completes a historic visit to Africa with the promise of a new era in relations between the Jewish state and African nations.When it comes to combating the latest anti-Semitic meme/scheme, it will be up to American Jews to lead the way in expanding our relationships with our African American neighbors and in urging friends and allies in that community to denounce the newest manifestation of history’s oldest hate.Rabbi Abraham Cooper is Associate Dean of the Simon Wiesenthal Center and Museum of Tolerance. Dr. Harold Brackman, a historian, is a consultant to the Wiesenthal Center.