Forget Turkey and the Kurds, forget Belarus and the refugees, forget the massacres in Ethiopia or the abuses in Mali. For HRW, it’s all about Israel.

If anyone has any lingering doubts that Human Rights Watch – the New York-based NGO founded in 1978 to pry open closed societies – was obsessed with Israel, a recent tweet by its executive director Kenneth Roth should put those doubts to rest.

Sitting atop a list he tweeted this week of the “top human rights news in 2021” was “Israel’s apartheid.” That’s right, the head of the organization that declared in an easily debunkable report in April that Israel was an apartheid state has self-importantly placed in his tweet that declaration itself as the top human rights story of the year.

In Roth’s view, HRW’s characterization of Israel as an apartheid regime is more significant in the human rights universe than the abuses committed by the Iranian or Syrian governments against their own people, by China against the Uyghurs, or by the Taliban against those unfortunate Afghanis who now find themselves under itd rule.

Forget Turkey and the Kurds, forget Belarus and the refugees, forget the massacres in Ethiopia or the abuses in Mali, Nigeria, Yemen, Saudi Arabia and Russia. For HRW, it’s all about Israel.

A click on to the link provided in Roth’s tweet takes one to HRW’s website, where – under an orange “Donate Now” banner – the group listed its most read stories of the year. Nowhere on the list is there a story about Iran’s subjugation of dissent nor how North Korea terrorizes its citizens. What tops this list is HRW’s “Israel apartheid” report. No great wonder, since the organization breathlessly promoted it. 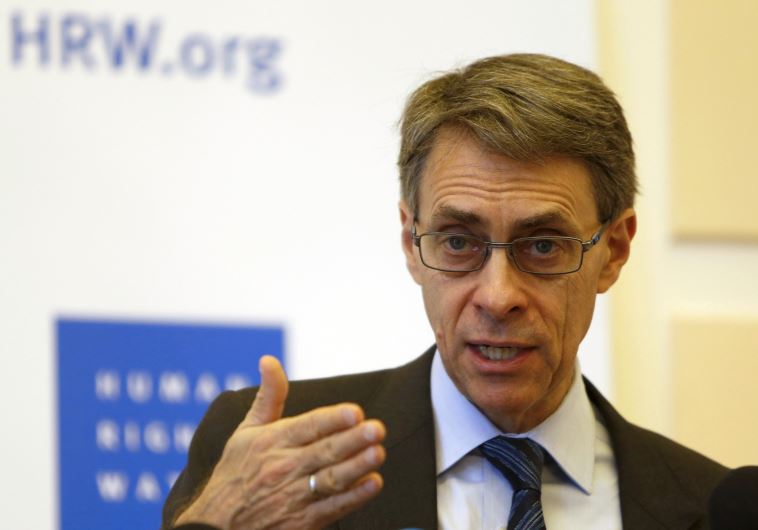 The “Donate Now” banner atop the page is no insignificant triviality, as the organization has a history of bashing Israel to raise funds. In 2009, it was widely reported that an HRW delegation visited Saudi Arabia to raise money from wealthy Saudis by highlighting the group’s activities against Israel. In other words, using anti-Israel reports to raise money is not a modus operandi foreign to this organization.

But that is not its sole motivation. As the group’s founder, the late Robert L. Bernstein, wrote in a New York Times op-ed in 2009, the organization has taken to “issuing reports on the Israeli-Arab conflict that are helping those who wish to turn Israel into a pariah state.” Bernstein wrote that this distortion of the group’s original mission forced him to do something he never anticipated: “publicly join the group’s critics.”

Those words were written 11 years ago. In the interim, HRW has morphed from an organization whose reports are “helping those” who want to delegitimize Israel into a group leading that charge. There is no other way to explain its obsession with Israel.

For instance, earlier this month the organization issued yet another report about the Jewish State titled “Israel: Abusive Policing in Lod during May Hostilities,” in which it paints a decidedly one-sided picture of what happened in that city when Arabs rioted as Israel was bombarded by rocket fire from Gaza.

A key figure behind this report, as well as the “apartheid” report, was HRW’s Israel and Palestine director Omar Shakir, whose expulsion from Israel for supporting the Boycott, Divestment and Sanctions movement was upheld by the Supreme Court in 2019.

In upholding Shakir’s expulsion because of BDS activities, the court wrote, “An individual who negates the very legitimacy of the State of Israel or its control of the area, and seeks to undermine it through a boycott, is included [in a 2017 law authorizing the state to deport foreign BDS activists], even if he disguises his position with the rhetoric of human rights or international law. The test is a substantive one, and the words the delegitimization campaign wraps itself in do not grant it immunity.”

In that case, the court was careful to make clear that the action it upheld was aimed at Shakir, and not the HRW itself, which was free to operate in Israel. Nevertheless, much of what the court said about Shakir seems applicable to HRW as well. It consistently uses the rhetoric of human rights and international law to delegitimize Israel and deprive it of the right to defend itself and protect its citizens.

We hope reasonable people will come to see this, a process that should be accelerated by Roth outlandishly placing “Israeli apartheid” atop his list of “top human rights news” of 2021.