Where does Paraguay come into the picture for the Jewish state today? Even after the embassy controversy, Jerusalem and Asuncion have attempted to forge a stronger relationship.

Paraguay, the nation that once abruptly pulled its Israeli embassy from Jerusalem, is now a notable yet little-discussed factor in the global fallout of the Russia-Ukraine war.

Israel is well-familiar with the puzzling behavior of Paraguay from the South American country’s decision, in September 2018, to close its embassy in Jerusalem only several months after it had opened. At the time, Asuncion moved the embassy away from the Israeli capital and back to Tel Aviv only three weeks after President Mario Abdo Benitez rose to power.

After previously crafting a delicate balance in its approach to the war in Ukraine, Israel most recently voted to support the removal of Russia from the UN Human Rights Council, while Foreign Minister Yair Lapid accused Moscow of war crimes. Russia responded by summoning Israel’s ambassador to the country, Alexander Ben Zvi.

Where does Paraguay come into the picture for the Jewish state today? Even after the embassy controversy, Jerusalem and Asuncion have attempted to forge a stronger relationship. Paraguay recognized Hamas and Hezbollah as terrorist groups in August 2019, and Israel appointed an ambassador to Paraguay during the same month.

Yet, the war in Ukraine should remind Jerusalem of the challenges and complexities associated with advancing relations with Asuncion. 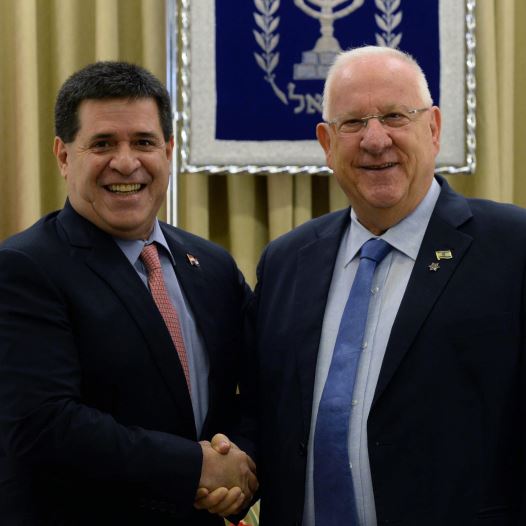 Paraguay is one of the world’s 10 largest exporters of that product, with Russia representing the second-largest importer of meat from the South American nation. Accordingly, Paraguay’s meat sector was in crisis after the US, Canada, UK and European Union suspended Russia’s access to the SWIFT system in the early days of the war.

At that point, Paraguay faced a crossroads: Accept the outcome of international sanctions driven by human rights concerns or strive to circumvent the sanctions for the sake of conducting business as usual. The Paraguayans’ choice should tell the international community everything it needs to know about the country’s mindset.

Paraguayan exporters responded to the meat crisis by negotiating with Russian clients for shipments of poultry meat, bovine offal, fat and whole milk powder, ensuring the continuation of business as usual between Asuncion and Moscow.

This approach of courting rather than shunning the global pariah that is Russian dictator Vladimir Putin should come as no surprise when considering that Paraguay is also a major exporter of beef to Iran, the world’s leading state sponsor of terrorism.

What if the US attempted to offset the impact of the current oil crisis by pursuing new avenues of commerce with Russia, rather than the Biden administration’s actual policy of banning imports of Russian oil? Undoubtedly, international outrage would be directed at Washington. Yet, the moral failures of Paraguay receive scant attention.

Paraguayan President Benítez is among the Latin American heads of state who has failed to explicitly criticize the Russian invasion. Asuncion’s silence on Russian aggression is a painful blow to Paraguay’s Ukrainian population of about 40,000, including a particularly large community in the Itapua Department.

For all Paraguayans, their government’s feckless stance on Russia adds insult to the injury of years of organized crime, most notably persistent money laundering scandals orchestrated by Carlos Fernández Valdovinos and Gov. José Domingo Mino Adorno.

Abdo Benítez’s predecessor as president, Horacio Cartes, was repeatedly imprisoned for currency fraud charges in the 1980s and later was the subject of an extradition attempt by Brazil over alleged money laundering connected to Dario Messer, the businessman who in August 2020 signed a plea bargain with Brazilian authorities that sentenced him to 18 years in prison for money laundering and embezzlement.

And the list goes on. Interior Minister Federico Alberto Gonzalez Franco, a confidant of Abdo Benítez, has ties to Russia’s intelligence services. Minister of Industry and Commerce Luis Alberto Castiglioni Soria is a close ally of Iran.

Most recently, Latin American media reports have casted renewed spotlight on the activities of Carlos Fernández Valdovinos, former head of the Central Bank of Paraguay during the Cartes presidency and an architect of Asuncion’s infamous money laundering operations – schemes that have, in turn, financed terrorism in the Middle East by groups such as Hezbollah and provided a dark money sanctuary to Europe’s most corrupt politicians.

“Paraguay hosts a significant and growing money laundering operation connected to Hezbollah in the Triple Frontier, where Paraguay intersects with Argentina and Brazil. Increasingly, Hezbollah’s local operatives are involved in the local boom of cocaine trafficking – and there is evidence that Hezbollah is sending senior officials to the Triple Frontier to coordinate these activities,” Emanuele Ottolenghi, a senior fellow at the Foundation for Defense of Democracies, has written for Foreign Policy.

Paraguay’s moral failure on Russia is disturbingly well-aligned with Asuncion’s history of both domestic corruption and wayward decision-making abroad. As the war in Ukraine provides Israel or any nation with a crucial opportunity to evaluate its global alliances, a closer examination of Paraguay by the Israeli foreign policy establishment is surely in order.

The writer is the editor and publisher of the San Diego Jewish World, and the former editor-in-chief of the Jewish News Syndicate.