Israel, the Suez Crisis and accusations of colonialist collusion - opinion

Israel was born in a struggle against British colonialism. However, seven decades on from 1956, some still depict Israel as a colonialist power.

AT THAT point a woman shouted from the balcony, “Kakh l’Natzer!”’ – “So too for Egyptian Prime Minister Gamal Abdel Nasser,” pictured being cheered in Cairo after announcing the Suez Canal Company, August 1, 1956).
(photo credit: Wikimedia Commons)
Advertisement

66 years ago this week, governments worldwide expressed concern when the IDF attacked deep into Egyptian Sinai. But in London and Paris the official disquiet was feigned, for the two fading European colonial powers had been party to the planning, timing and execution of Israel’s offensive.

It was agreed that the three countries would deliver a coordinated blow against their common enemy – Egypt’s pan-Arab nationalist president Gamal Abdel Nasser.

In July 1956, Nasser’s revolutionary regime had nationalized the Anglo-French Suez Canal Company to the great chagrin of London and Paris. The Sèvres plan had Israel create the pretext for Britain and France to attack Egypt and regain control of the Suez Canal, the desire being to expedite Nasser’s downfall.

In accordance with the tripartite understandings, hostilities commenced with Ariel Sharon’s paratroopers jumping to positions just east of the Mitla Pass, ostensibly threatening the canal. Paris and London then declared the need to safeguard the vital international waterway, ordering the warring Israelis and Egyptians to pull back from the canal zone. As expected, unlike Israel, Egypt refused to acquiesce to the demand, and the two European powers had their alibi for military intervention.

Within 100 hours of battle, the IDF conquered the Gaza Strip and almost all the Sinai Peninsula – an impressive battlefield accomplishment for the eight-year-old Jewish state. 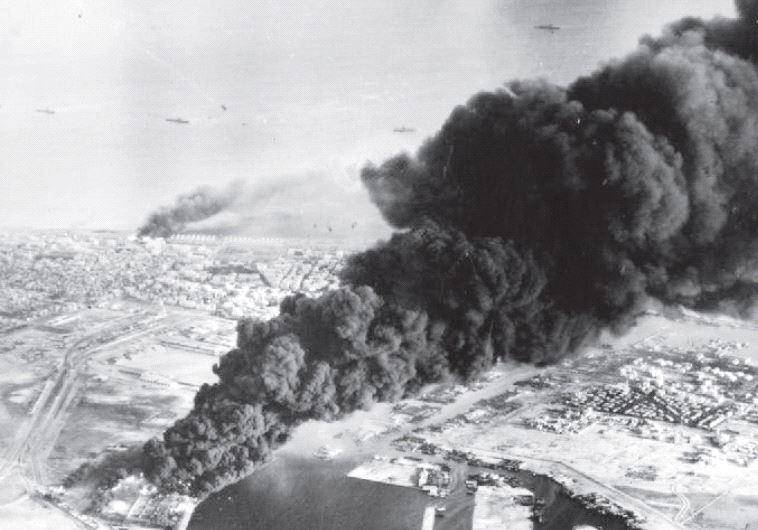 Smoke rises from oil tanks beside the Suez Canal hit during the initial Anglo-French assault on Port Said in November 1956 (credit: Wikimedia Commons)

Israeli cooperation with UK, France in 1956

Interestingly, Britain was not an obvious partner for clandestine cooperation with Israel. In 1956, the reciprocal antipathy that plagued the end of the Mandate still cast a shadow over the UK-Israel relationship. The IDF even planned for the possibility that Britain would fight Israel on the Arabs’ side – as had indeed happened in January 1949, when the RAF scrambled to attack Israeli forces in northern Sinai.

Furthermore, in November 1955, British prime minister Anthony Eden angered Israel by advocating its withdrawal from the 1949 armistice lines – Eden proposed Israel hand over parts of the Negev to the neighboring Arab states.

But Nasser’s aggressive behavior forced a change in British priorities, the nationalization of the canal being the final straw. Since the Free Officers coup d’état in 1952, Cairo had become a thorn in London’s side: demanding an end to Britain’s presence in Egypt and the Middle East, supporting radical elements that threatened the UK’s Arab allies, and opening the region to Soviet penetration.

If Israel-UK ties were shrouded in mutual suspicion, the Israel-France relationship was warm and intimate. French governments of the early and mid-1950s espoused the spirit of the wartime anti-Nazi Résistance, seeing the Jews as comrades-in-arms. For socialist French politicians like Mollet, Israel’s Mapai (Labor) government was progressive and deserving of solidarity.

CONCURRENTLY, FRANCE was fighting a war in Algeria against Arab nationalists demanding independence. The insurgency received military and diplomatic support from Cairo, and Paris saw in Nasser’s routing the key to victory in North Africa.

But if for France and Britain it was the nationalization of the canal that triggered the tripartite attack, for Israel the impetus came from the September 1955 Egyptian-Czechoslovak arms deal which begat a massive influx of Soviet bloc weapons to Egypt, empowering and emboldening Israel’s most formidable enemy.

Even before the arrival of the new Soviet arms, Egypt had turned Israel’s Red Sea port of Eilat into a white elephant by blockading the Straits of Tiran to shipping to and from Israel. At the same time, the Egyptian military was orchestrating repeated Palestinian Fedayeen terror attacks, all while beefing up its threatening presence in northern Sinai. Israel felt it had to preempt before Soviet weapons dramatically changed the balance of power.

For London and Paris, the Suez War was an unmitigated disaster. The US opposed their attack, viewing it as anachronistic colonial-type gunboat diplomacy, detrimental to western interests in the Cold War. Washington unabashedly compelled France and Britain to withdraw – applying harsh economic pressure that threatened the solvency of its European allies.

The British and French, who earlier in the century had carved up the Middle East into respective spheres of influence, were now exposed as second-rate world powers. Their Suez defeat was the harbinger of the loss of French Algeria and the demise of Britain’s leadership role in the region, which was transferred to the Americans. In the end, it was not Nasser who was forced from office, but Eden and Mollet.

For Israel, the 1956 military victory failed to advance peace, or, in the absence of Arab recognition, any changes to the territorial status-quo: Washington insisted on a full pullback to the 1949 lines.

Nonetheless, the war lifted the blockade of Eilat, and Israeli deterrence was enhanced, inaugurating a decade of relative quiet on the southern frontier.

In addition, Israel’s adept handling of American demands in the months following the crisis led to an improvement in US-Israel ties. President Dwight D. Eisenhower, who in 1956 had been critical of Israel’s behavior, in 1960 became the first American leader to host an Israeli prime minister, Ben-Gurion, at the White House.

If there was a downside for Israel, it was foreseen during the cabinet deliberations on the authorization of the offensive. The ministers from the left-wing Ahdut Haavoda (Unity of Labor) party expressed concern about Israel’s “unholy” collaboration with European colonial powers (though they still voted, together with Ben-Gurion’s Mapai ministers, for the attack).

Soviet premier Nikolai Bulganin pressed this theme in an angry letter to Ben-Gurion dated November 5, 1956, charging that Israel had acted “as a tool of foreign imperialist powers.”

Israel was born in a struggle against British colonialism and should have enjoyed a natural affinity from countries that had similarly battled European empires for their freedom. But the Sinai Campaign injured Israel’s standing among the growing number of newly independent African and Asian nations of the Non-Aligned Movement, where Nasser remained a hero.

Regrettably, the 1956 depiction of Israel as a colonialist power has had remarkable longevity. Some seven decades later, this erroneous accusation is still being actively propagated by those seeking to undermine Israel’s legitimacy – just ask Jewish students studying at Western universities.

The writer, formerly an adviser to the prime minister, is the chair of the Abba Eban Institute for Diplomacy at Reichman University. Follow him at @AmbassadorMarkRegev on Facebook.