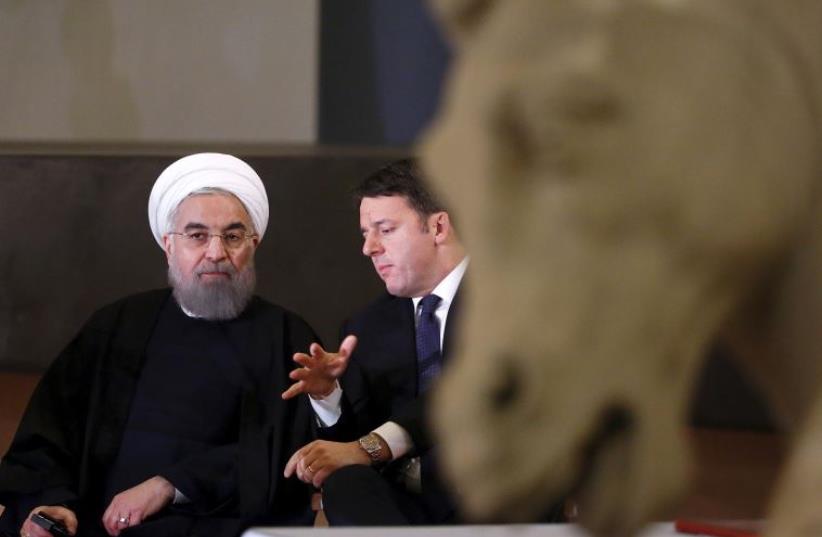 ran President Hassan Rouhani (L) talks with Italian Prime Minister Matteo Renzi at the Campidoglio palace in Rome, Italy, January 25, 2016
(photo credit: REUTERS)
Advertisement
In the tradition of Picasso’s Guernica, I propose to French President Francois Hollande to double the size of the dozens of Holocaust memorials in France to mark the murder of 6,000,000 Jews in Europe. These upgraded Holocaust memorials will include in advance the extermination of the 6,000,000 Jews in Israel today that the Iranians and the Palestinians are planning with France’s help.On International Holocaust Remembrance Day, President Hollande enthusiastically welcomed Hassan Rouhani, president of the Holocaust-denying, genocidal Iranian regime. Less than a week later, France threatened to recognize the establishment of a terrorist state of Palestine in the historic heartland of Israel.Future Holocaust Memorials is a wake-up call warning the world of France’s actions to trigger a second Holocaust. It follows in the artistic tradition of Picasso, crying out against a barbaric prelude to genocide.Just as European leaders’ acquiescence to Hitler’s raining bombs on the Spanish village of Guernica gave him the license to proceed with preparations for WWII and the extermination of Europe’s Jews on his way to global conquest, France is supporting Iranian ayatollahs and Palestinian jihadists in their efforts to annihilate Israel as a prelude to destroying the democratic way of life everywhere.The same French who established a Nazi Vichy government that rounded up the French Jews for slaughter in the 1940s subsequently built dozens of Holocaust memorials and museums in France to honor the 6,000,000 Jews that they participated in murdering. It seems that France loves dead Jews, but loathes living ones.Knesset speaker Yuli Edelstein decried the “hypocrisy” of France hosting President Rouhani. “I have no words for the hypocrisy of the presidents of countries, like France, that on International Holocaust Remembrance Day host the president of Iran,” he said. “We will have to continue our struggle to make sure the Holocaust is remembered and so that others’ consciences will speak to them.” Edelstein also mentioned the Holocaust cartoon contest sponsored by the Tehran Municipality and set for June, carrying a $50,000 prize.Michael Oren, former Israeli ambassador to the United States, asked: “How can Europe respect the memory of the Holocaust, while on the same exact day it hosts the leader of the Iranian regime, which denies that the Holocaust even happened?” Seventy years after Auschwitz, the president of France is full of smiles as he honors the Iranian president in Paris who threatens to exterminate the Jews of Israel. The Iranians are up-front about their intentions: “Israel is doomed to be wiped off the map in a war of destiny.” “Israel no longer has reason to exist and will soon disappear.” “Israel is a disgraceful stain on the Islamic world and a rotten dried tree that will be eliminated by one storm.”When Rouhani and his henchmen call for the incineration of another 6,000,000 Jews, believe them.Instead of telling the Iranians to end their Holocaust denial, support for terrorism, and genocidal threats, the French are enthusiastically arranging billions of euros worth of business with Iran, including the sale of dual-use technologies to boost Iran’s nuclear and missile development.In addition to honoring Iranian anti-Semitism, France threatens to recognize a Palestinian terrorist state on the highlands overlooking Tel Aviv. In the previous election for a Palestinian parliament, the majority in both the West Bank and Gaza elected Hamas, whose charter reads: “Israel, by virtue of its being Jewish and of having a Jewish population, defies Islam and the Muslims.... Muslims will fight the Jews (and kill them); until the Jews hide behind rocks and trees, which will cry: O Muslim! There is a Jew hiding behind me, come and kill him.... I indeed wish to go to war for the sake of Allah! I will assault and kill, assault and kill, assault and kill.”Palestinian public opinion data from surveys conducted by four independent research groups over the past 25 years exposed Palestinian positions about Israel that all bear directly on the current Palestinian terrorist offensive. A solid majority of Palestinians have supported terrorism against Israelis. Moreover, the more murderous an attack, the more it is supported. The vast majority of Palestinians state that they hate Israelis and believe that Jews have no right to the Land of Israel, and therefore the Jewish state has no right to exist.When 80-year-old Palestinian Authority President Mahmoud Abbas dies or retires, the struggle for power in the West Bank will be between Fatah, Hamas that rules Gaza and Islamic State seeking a caliphate that demands that Israel be eliminated.The author is professor emeritus of Art and Jewish thought at Ariel University, professor of art and education at Columbia University and Bar-Ilan University and research fellow at the MIT Center for Advanced Visual Studies.