As I see it: Brexit? Jexit was the first lesson in national self-determination

The Jews exited Egypt for freedom (not without a great deal of internal uproar, moaning and backsliding). That’s the message of Passover. To get the point of Brexit, look back to Jexit. 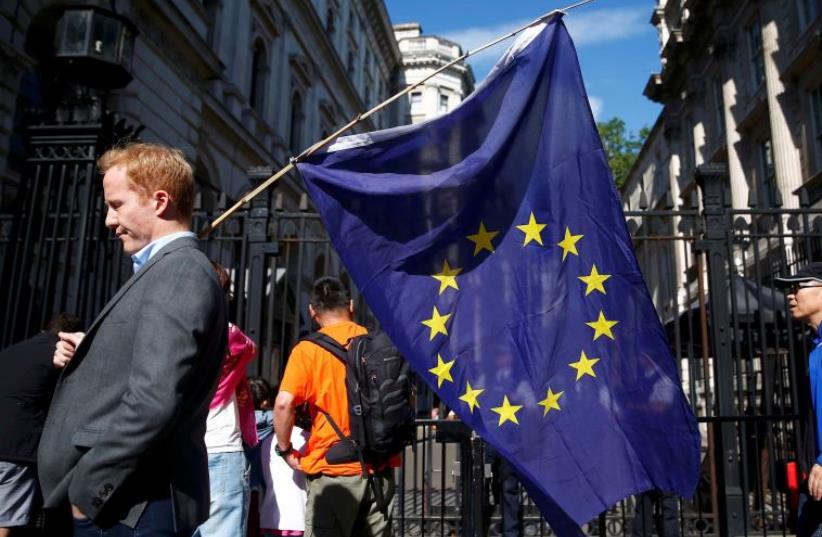 A man carries a EU flag, after Britain voted to leave the European Union
(photo credit: REUTERS)
Advertisement
The die is now cast. On Wednesday of this week the British prime minister, Theresa May, triggered Article 50 of the Treaty on European Union, the start of the process by which the UK will exit the EU.Britain and the EU now enter stormy and uncharted waters. A geopolitical divorce on this scale is unprecedented and much remains contestable and unknown.Underlying the specifics remains the big issue dividing those who wanted to remain in the EU – and who still hope the referendum result can somehow be reversed – from those who support Brexit.That issue is nationalism, for so it is perceived in great alarm by Remainers – and by many in Britain’s Jewish community.Nationalism has implications of aggression and bigotry. That’s what Remainers fear Brexit will revive. National identity, on the other hand, is benign. Yet national identity, or the revival of the spirit of the nation, is what Brexit is actually all about.Only a nation can produce freedom and democracy, because only a nation binds people together in a shared project of unified cultural destiny, expressed through laws made by a nation’s sovereign parliament.This is dismissed by Remainers for whom democratic self-government just isn’t that important. That’s because they tend to be globalist in outlook, not only unattached to locality or national culture but suspicious of such ties as narrow and exclusive.By contrast the millions who voted for Brexit, and many of the additional millions in Europe who support populist parties, are deeply attached to their nation and its culture and want to govern themselves in accordance with the history, language, religion, institutions and traditions they share with one another.The entire mainstream political class in Britain and Europe abandoned that eminently reasonable desire by creating the transnational project called the EU. This created a vacuum into which have marched not just defenders of national identity but also some truly racist or fascist parties.Some of these pose specific potential dangers to Jews. Nevertheless, Jews have most to fear when national bonds are not strong but weak. That’s when people are most likely to turn on each other.Far from suppressing aggressive nationalist tendencies, the EU has itself caused these groups to rise, precisely because it has stifled national freedoms and imposed migration policies which undermine cultural identity and solidarity. And it told all who wanted to continue to live in a recognizable homeland adhering to the core Western precept of one law for all, based on Judeo-Christian values such as equality and human rights, that they were racists.What, though, is a nation? Is it any group asserting the right to self-determination? It’s fashionable to define a nation, in historian Benedict Anderson’s phrasing, as an “imagined community.” This corresponds to the prevailing shibboleth of cultural relativism – that everyone’s way of life has identical value to everyone else’s, that everyone can fashion their own authenticity and so if any group claims to be a nation it therefore is a nation.Nationhood, however, is not “imagined” but has distinct characteristics. Nation is different from tribe, country or state. Nationhood requires a discrete culture based on a distinctive language, religion, history, traditions, institutions. It also requires a unified destiny and independent self-government to make the nation’s laws.This is why the claim of Palestinian national identity is bogus. Before 1948 there was no distinct Palestinian culture, religion, language, institutions or self-government. Palestine was the name invented by the Romans to obliterate the Jewish ownership of the land. Arabs who lived in the land pre-1948 considered themselves to be southern Syrian or part of the Arab nation but never “Palestinians.”Palestinian identity was invented in the 1970s purely to destroy the State of Israel. Many Arabs have said so over the decades.In 1977, for example, Zahir Muhsin, a member of the PLO Executive Council, said: “The Palestinian people does not exist. The creation of a Palestinian state is only a means for continuing our struggle against the State of Israel for our Arab unity. Only for political and tactical reasons do we speak today about the existence of a Palestinian people, since Arab national interests demand that we posit the existence of a distinct ‘Palestinian people’ to oppose Zionism.”Some say in response: well that’s as may be, but the Palestinians assert their national identity today and so they are entitled to be regarded as a nation. Not so: not just because the claim is vacuous, but because Palestinian national identity in itself is inescapably predicated upon the destruction of the national identity of the Jews.One reason why so many in the West fail to understand the Jews’ claim to the Land of Israel and promote the Palestinians’ claim instead is not just that they are ignorant of history – and so are unaware that the Jews are the only people for whom Israel was ever their national kingdom. Crucially, they also don’t understand that the Jews are not just members of a religion or a culture but an ancient nation.When the Jews marched out of Egypt they stopped being just a collection of 12 tribes. United by a common and now independent destiny, they became a nation governed by its own laws. The Jews exited Egypt for freedom (not without a great deal of internal uproar, moaning and backsliding). That’s the message of Passover. To get the point of Brexit, look back to Jexit.