As I see it: The UK referendum and the politics of hate

Britain’s EU referendum turned into a culture war. The divisions are savage and won’t go away. British Jews are on both sides. 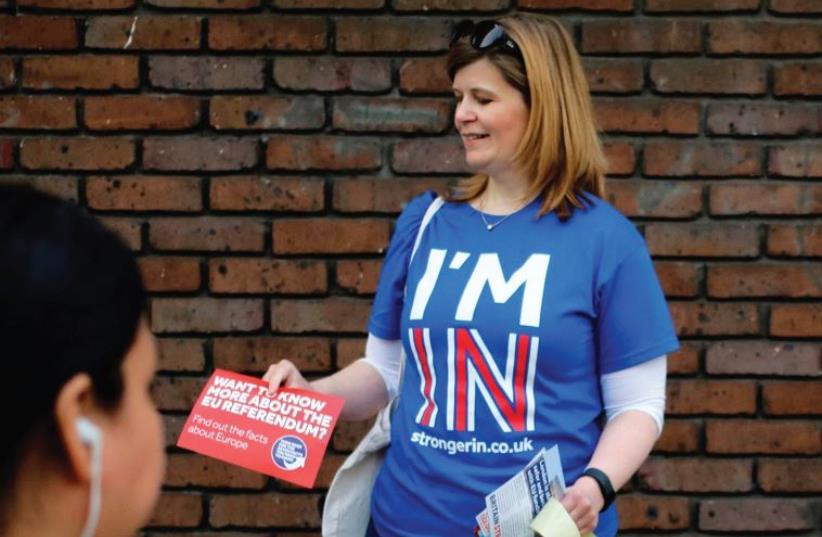 A WOMAN hands out leaflets last month, campaigning to stay in Europe for the Brexit vote, in London.
(photo credit: REUTERS)
Advertisement
At the height of Britain’s EU referendum campaign last week, a Labour MP, Jo Cox, was brutally murdered in the street on her way to meet the voters she represented. A supporter of the UK remaining in the EU, Cox was best known for her passionate campaigning on behalf of Syrian refugees.The murder suspect, Thomas Mair, bizarrely gave his name in his first court appearance as “Death to traitors, freedom for Britain.” Press reports about his past led many to suppose he was motivated by support for neo-Nazi groups and hatred of foreigners.The immigration issue featured prominently in Thursday’s historic referendum on Britain’s continued EU membership, whose result at time of writing was not known. Many Britons are deeply concerned about the EU’s core policy of allowing people free movement to live and work anywhere in the EU. The unprecedented numbers annually migrating to Britain have already put huge pressure on public services. If migration continues at this rate the situation will become unmanageable. In addition, with illegal migrants camped on the French coast and being regularly smuggled across the English Channel by people-traffickers, there is great anxiety that the huge movement into Europe of people from poor and war-ravaged countries will funnel yet more into Britain.On the back of this already neuralgic issue, the Cox murder detonated some of the ugliest, most vicious and exploitative campaigning ever seen in Britain.The killing was ruthlessly manipulated by the pro-EU Remain side in the hope of turning a vote which had been slipping away from them. The prime minister, David Cameron, made use of the murdered MP’s views to support Remain, praising her “strong voice” in the campaign.Parliament was recalled from its recess for a special tribute to the dead politician, something not done previously even for two MPs who were murdered by the IRA. In Britain’s highly charged atmosphere, voting Remain was presented as the way to honor Cox’s memory.Worse still, those who supported Britain exiting the EU, or Brexit, were blamed for creating a toxic atmosphere that contributed to the murder. Because of their concern over immigration, they were repeatedly accused of promoting the “politics of hate” which Cox was said to have been fighting. A Labour MP, Stephen Kinnock, said: “It is not a big journey from saying horrible things to doing horrible things.”The Brexiteers were thus smeared in their millions as racists and bigots who spawned neo-Nazis.While some of this attack coalesced around a controversial poster showing a tide of migrants walking into Europe, it mostly insulted millions of perfectly decent British folk. These are not anti-immigrant. They are merely aghast at the flood of people threatening to engulf Europe, and are anxious that Britain should be able to control its own migration levels.These concerns are shared by many recent immigrants themselves who supported Brexit.Dreda Say Mitchell, the novelist daughter of Grenadian immigrants, wrote in The Guardian this week that migration policy should be “brought back under the control of democratically elected politicians in this country.”Many British Jews, the descendants of immigrants and refugees, have however a visceral reluctance to back immigration control. A recent article in Haaretz by Anshel Pfeffer took this Pavlovian response to a grotesque level.It was “hard to contain the shame,” he wrote, that many British Jews, “not just a few misfits and oddballs,” would vote for Brexit. Their real motive, he claimed,was “fear of immigrants.” Any attempt to justify it was “rank hypocrisy bordering on racism.” Such Jews were turning their backs on “fellow refugees who not that long ago could have been us or our parents.” Voting for Brexit was therefore “the most un-Jewish act imaginable.”Well, I’m a British Jew. I supported Brexit principally on the grounds that Britain should become once again a democratic self-governing nation. I also back Britain being able to control its immigration levels.The comparison with Jewish refugees and migrants, whose total number in the decades around the turn of the past century is exceeded by the numbers now migrating to the UK every year, is invidious. Pfeffer’s comments are as offensive as they are shallow.Contrary to the claims of Remain, it is uncontrolled migration that swells neo-Nazi support. The rise of extremist parties in Europe has been fueled by those who have turned a blind eye to mass migration and who deny the growing phenomenon of Muslim assaults on women.In Britain, neo-Nazi groups have been boosted by the denial of Islamization, Muslim rape gangs and the infiltration of schools by Islamic radicals.What’s more, those claiming that Remain meant an end to the politics of hate are themselves the principal hate-mongers. Those backing Brexit talked about “getting our country back” from the EU. Commentators backing Remain used the same term to mean getting their country back from their fellow British citizens who supported Brexit.Those who voted for UK self-government have thus been damned as pariahs who hijacked a nation to which they are deemed too horrible even to belong.Britain’s EU referendum turned into a culture war. The divisions are savage and won’t go away. British Jews are on both sides. But when a society turns on itself like this it will hurt them all too in the end. It always does.

The author is a columnist for The Times (UK).
Advertisement
Subscribe for our daily newsletter