Baltimore: To inspire and aspire

The streets now in the news are the very streets I used to walk on Shabbat mornings to attend my father’s synagogue. 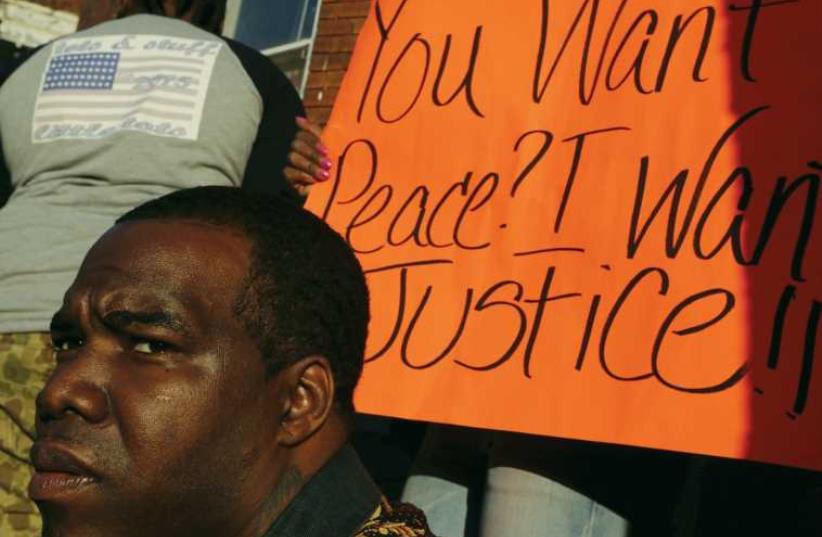 WEST BALTIMORE residents watch the scene of celebrations on West North Avenue near the looted and burned CVS Pharmacy as residents demonstrate against police brutality and celebrate the decision to prosecute police officers in the death of Freddie Gray in Baltimore on May 2
(photo credit: REUTERS)
Advertisement
As someone who grew up in Baltimore, I have been very pained by the riots in my old home town. The streets now in the news are the very streets I used to walk on Shabbat mornings to attend my father’s synagogue.That was of course in the 1950s; much has changed since then. But the row houses with the white marble steps, the very street names, are unchanged and are even today suffused with happy memories.But these neighborhoods have now been infiltrated by mobs, rioters, arson and smashed store windows. Instead of peace there is now rage and resentment. And the media and the public now stigmatize the gentle Baltimore of my youth as a racist city – without pausing to ask how a city can be called racist when its mayor is black, as is its chief police and most of its city council, some 40 percent of the police force, and the state attorney (not to mention the attorney general and the president).As a Jew, I empathize and sympathize with economic deprivation, prejudicial institutions and sub-standard schooling, having experienced many of these personally in mid-20th century America.
See the latest opinion pieces on our page
Discrimination was endemic: many schools and colleges had a quota system which only admitted a certain number of Jews; neighborhoods were closed off to us, as were many employment opportunities; many real estate agents and homeowners would not rent or sell to Jews; in the summer, some public swimming pools would not admit Jewish children; signs like “Jews and dogs not allowed” were not rarities; public school teachers had difficulty hiding their animosity toward Jewish students, often referring to us as “you people”; most social clubs were off limits to Jews; shouts of “dirty Jew” and “Jew boy” and “kike” were not infrequently heard in the schools and on the streets; Jew-haters and Jew-baiters were in abundant supply.But so what? We were hurt, but not surprised by this. After all, Jews are no strangers to hatred. We have suffered from blood libels and persecution and exterminations for millennia. Furthermore, in the 1950s the smoke of the Holocaust crematoria was still in the air above us. When it comes to racism, you name it, we know it. We have experienced it all.Far from being traumatized by the prejudice, we looked down on our tormentors and felt sorry for them – but not for ourselves. Instead of allowing ourselves to become emotional victims, our rabbis, teachers and communal leaders helped us reach deep down into our own heritage. Instead of tearing down, Jews built up. Without Jewish representation in government, we looked inward and devoted ourselves to acquiring skills and to learning professions, all the time enriching our family and religious life . Most critically, the Jews of Baltimore fought back against anti-Jewish racism by building Jewish day schools and yeshivot, by emphasizing education and by struggling constantly to maintain our Jewish distinctiveness, self-discipline and sense of right and wrong.Were we often hurt and wounded? Yes. Were we filled with rage at the overt hatred that we often encountered? Yes. Did Jews as a result riot or burn or loot or steal? No. Why not? Because we knew that, unlike our oppressors, we were not thugs; we sensed that they were morally sick, and would not lower ourselves to their level. We were instilled with Jewish pride.Far be it for me to preach to fellow sufferers in the black community. But if the black community wants to combat racism and hatred, it would profit them to take a page from those who know what it is to be downtrodden and poor and who have suffered the pains of prejudice. We have experienced it all; we are the experts.A small initial step: the Jesse Jacksons and the Al Sharptons and teachers and ministers must eschew demagoguery and cynicism and speak truth to their constituencies.Instead of making martyrs out of the looters, let them forcefully condemn them. Let them call a hooligan a hooligan, and not, as the mayor of Baltimore referred to them, as “deprived youth.”Instead of fanning the flames of grievance, resentment and entitlement which play so well with the mob and with the media, let the teachers and leaders find the courage truly to lead and not follow, and let them tell the rioters unsparingly and honestly that stealing and burning are not only wrong but also counter-productive, and that on the morning after will have changed nothing: the neighborhoods are still filled with drugs and crime and fear and single mothers, with young predators still roaming the fatherless streets.Has anyone – school teachers, church officials, politicians – urged blacks to reach down into their rich native traditions of family, discipline, accountability, hard work and faith in God? Tough love, not cries of martyrdom and victimization, is the need of the hour.Has anyone asked if Martin Luther King would countenance this behavior? What can be done about the riots in Baltimore and in other cities across America? The answers are tangled and complex. But one approach has yet to be tried by serious black leadership: both visionary and practical programs that will build black pride and help the community return to its own genuine roots. This, and not uncontrolled rage and mob rule, is the most effective answer to racism and discrimination.Jews know what it is to be mistreated and reviled. We also know what it is to rise above the level of the haters. The sweet streets of my youth in Baltimore can be restored to their former glory. What is needed is the courage to speak the truth, and the wisdom to aspire and inspire.