Barack Obama and the Oslo effect

No questions today are as essential or as agonizing as these. 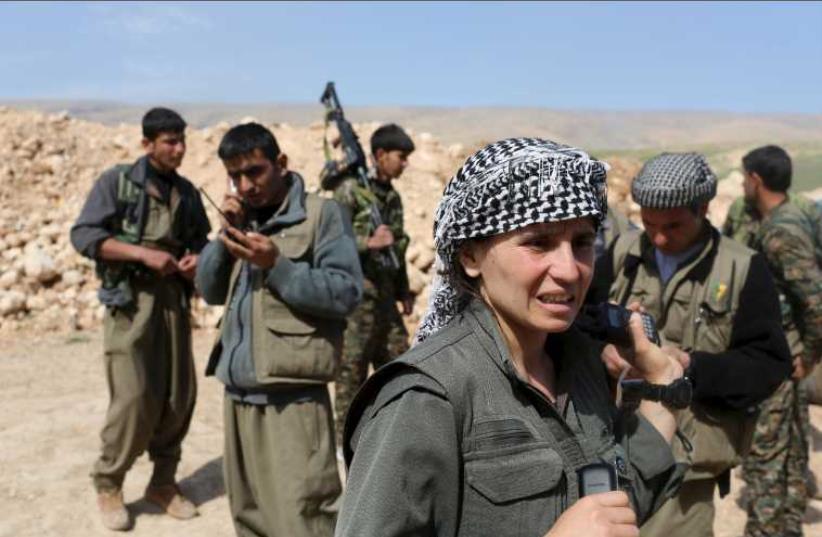 Kurdish Women Battle Islamic State.
(photo credit: REUTERS)
Advertisement
Barack Obama and the Oslo effect We are at war, declared François Hollande before a joint session of the French legislature.We are at war, Hollande’s prime minister, Manuel Valls, has repeated at every opportunity.But there is a complication.Hollande and Valls have emphasized that this war is a double one to be waged against a single enemy that has split into two.The domestic front passes through the sidewalk cafes, football stadiums and concert halls of Paris, and through the safe houses in Saint Denis and Molenbeek (Belgium) where infiltrated fighters hide and wait.But the principal front is abroad. It passes through Raqqa, Mosul and other cities in Iraq and Syria where the barbaric enemy obtains its weapons, collects its marching orders, and learns – in training camps that the West allowed to proliferate for much too long – the art of the new and horrifying war against civilians.Acknowledging that this second front is the more decisive does not imply that destroying Islamic State (IS) will suffice to conjure away all of the more or less dormant cells that have been set up and are ready to strike in the great cities of France and Europe.But it does mean without any doubt that because the resources and command centers of those cells are in IS’s territory, striking at the beast’s head would deprive them of much of their power. Can one combat the effect without attacking the cause? Shut down a subsidiary without dealing with the home office? Cure cancer by targeting the metastases while allowing the primary tumor to grow? How, then, can one avoid the conclusion that peace in Paris can be won only through war in Mosul? Or, more to the point, that the war against IS cannot be won in the streets of Paris or any city tormented by an invisible, unpredictable enemy ever ready to strike, but only on the plains of Iraq and Syria where that enemy is simultaneously visible, easy to target, and vulnerable? Against this common-sense argument are marshalled three forces of varying intensity.First, there is the appeasement reflex of those who, reversing the sequence of causality, never tire of repeating that the Islamists come after us because we have gone after them. This is an ignorant and shameful argument akin to the one used by the French pacifists of the 1930s, an argument that aligns with the cynical rhetoric of the assassins and their despicable communiqués.Second, there is the old argument that was served up to us 20 years ago with regard to the Serbian army, then alleged to be the world’s third largest, and that now consists of scaring the Western public with stories of the all-powerful and nearly invincible legion that dismembered Iraq and Syria and that is now trying to draw us ineluctably into another quagmire. If that were true, how is it that the Kurds, who for the moment are the only force facing the enemy on the ground, prevail decisively in every battle they wage? How does one account for the fact that in Kirkuk and, more recently, in Sinjar, the beheaders bolted without a fight in the face of the determination and bravery of the poorly armed Peshmerga? And, by the way, what has happened to the purported “stocks of tanks and artillery” that the fanatics made off with after the rout of the Iraqi army, stocks of weapons that were supposed to make any form of intervention except air-strikes much too risky? Why did we not see those weapons used in Kobani or, last week, in the battle that liberated the Yazidi capital? Why has IS not shelled the Peshmerga’s lines instead of continuing to use the same antediluvian suicide trucks? The answer is that these arsenals were destroyed, reduced to silence, or paralyzed by coalition aircraft and that IS is no longer anything but a paper tiger.And, third, there is the reticence of Barack Obama, who appears to be more and more visibly haunted by what one is tempted to call the Oslo effect in reference to the Nobel Peace Prize that was conferred on him in the early days of his first term. In the manner of Victor Hugo taking himself for Victor Hugo and Sartre’s cafe waiter who liked to pretend he was a real cafe waiter, the president of the world’s most powerful nation, the man without whom little will be possible and whose determination, therefore, is at least as important as that of François Hollande and David Cameron, seems to be asking himself each morning, while shaving, how a real winner of the Nobel Peace Prize should act. When will the president of the United States realize that, faced with an enemy that has declared war on civilization, the time for narcissistic moralizing is over? When will he grasp how disastrous it would be to leave a legacy in which a Nazi-like state was allowed to take root where it wished, while it was still possible to eradicate it if the decision had been made to do so. Will he hear the plea for help that a grieving France is making to its eternal ally? Will he see that today, as in 1917 and 1941, his country has a rendezvous with Europe? And what has become of the young Obama who explained to me with perfect clarity, when I met him in Boston in 2003, the differences between the absurd war in Iraq and a politically just, morally justified war, the first principle of which must be not to compound an evil but to curb it? No questions today are as essential or as agonizing as these.Translated by Steven B. Kennedy.