Barghouti deserves the same as Carlos the Jackal

Barghouti is a terrorist, convicted by a court of law for the murder of innocent civilians. 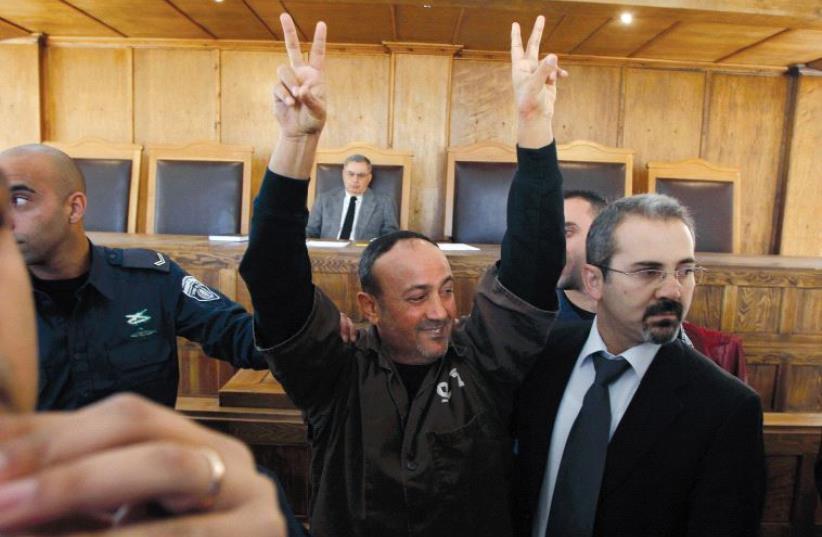 Marwan Barghouti, seen here at the Jerusalem Magistrates’ Court in 2012, is currently serving five life sentences for murder
(photo credit: REUTERS)
Advertisement
I've read over and over the New York Times article by the arch-terrorist, the convicted murderer Marwan Barghouti. As the person who headed Israel’s security agency at the height of the second intifada, I am well aware of who Barghouti is, yet anybody reading his article would not know the true picture.Only after a public uproar did the Times finally mention, as an afterthought, the circumstances in which Barghouti was arrested, tried and sentenced to five life sentences plus 40 years for pre-meditated murder – the reasons for which he is sitting in jail in Israel. I remember very well the pursuit of Barghouti during the wave of terrorist violence in which hundreds of Israelis were murdered and thousands more wounded.Barghouti, who several months before the second intifada lost the elections for the position of General Secretary of the Fatah movement in the west bank, decided to leverage the wave of terror that began in September 2000 to regain the sympathy of the masses which he lost in the elections.And what was the way in which this ‘Man of Peace’ decided to do that? He became the head of a murderous gang of terrorists who launched armed terror attacks shooting and killing unarmed civilians. Barghouti was tried in a civil, not military, court, where he received his sentences for his role in the murders of five innocent people.Before his capture his behavior was exactly that of a wanted criminal at the head of an organized gang of dangerous killers. A little because of Barghouti’s carefulness, and a lot because of his cowardice - he preferred to send his own men to carry out the attacks and not to risk himself - we succeeded in reaching many of the terrorists who were under his command and prevented even more bloodshed.Barghouti is exploiting provocation after provocation from his jail cell to place himself as a leader. That is what he did before his arrest, on the blood of Israelis and even innocent Palestinians who were hurt or killed by the terror attacks he led. That is what he has been doing for over 15 years in jail. The tailwind he received and receives now from those few Israelis who want to see him as Abbas's successor as president of the Palestinian Authority is pushing him to carry out further provocations, such as the current hunger strike.Barghouti is a terrorist, convicted by a court of law for the murder of innocent civilians. Rather than giving him a newspaper podium for his propaganda, we should adopt the conditions of imprisonment for terrorists used by democracies such as France, the United Kingdom and the United States. Barghouti and terrorists like him must be imprisoned under the same conditions as the arch-terrorist 'Carlos the Jackal,' the convicted murderer imprisoned in France for the last 20 years. Barghouti is another arch-terrorist and must be treated as such. His desire to return to the political arena can only be realized in the next incarnation. He will continue serving his five life sentences plus 40 years until his last day on this world. Avi Dichter is a member of the Knesset in the Likud Party. He chairs the Foreign Affairs and Defense Committee and is the former head of the Israel Security Agency.