Barghouti is a convicted murderer. Nothing more

Trying to portray Barghouti as some type of Nelson Mandela is grotesquely offensive to the memory of that great man. 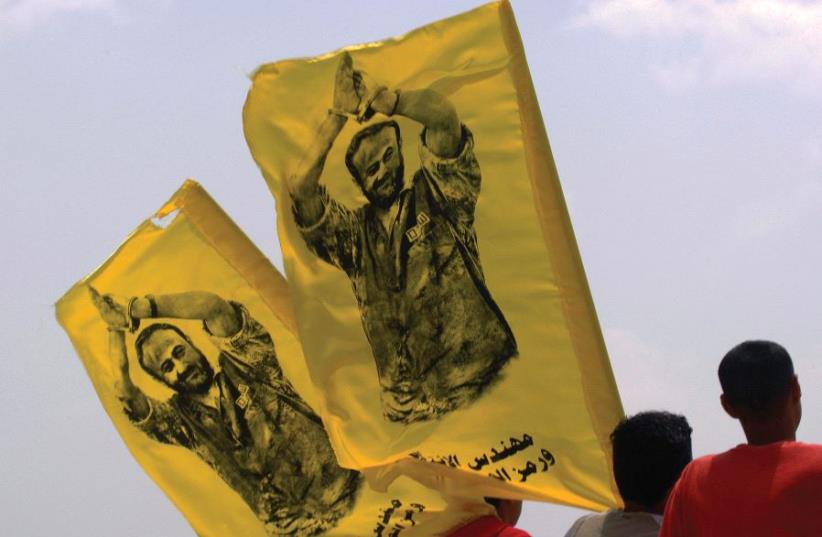 PALESTINIAN YOUTHS carry flags with the image of Marwan Barghouti during a protest in the West Bank
(photo credit: REUTERS)
Advertisement
When terrorism explodes in your face, we are all the same – we run. Amid the screams of panic and pain, through the smoke and with bullets hunting us down, we flee for our lives. It is an inspiring phenomenon that the first responders are running past us the other way – directly into the gunfire, explosions and flames. America saw it on 9/11, but the unhappy truth is that in Israel we see it all the time.My younger brother, Salim, was one such first responder – a dedicated police officer who loved his job, loved serving his country and fellow citizens, and who in 2002 ran straight into danger when he heard a Palestinian terrorist throwing grenades and shooting up the Seafood Market restaurant in Tel Aviv.With two innocent civilians on the ground dying or already dead and over a dozen others wounded, Salim charged the terrorist and shot him before he could kill more innocent people. But as Salim moved in to see if the terrorist was wearing a suicide explosive belt, the wounded terrorist suddenly thrust a knife into my brother, killing him.The man who organized that attack was Marwan Barghouti.When I heard that The New York Times gave him a stage from which to launch his mass prison hunger strike and called him a “Palestinian leader and parliamentarian,” my blood boiled. This is the cold-blooded killer who orchestrated murderous attacks and sent terrorists to hurt innocent people.My younger brother died and our family has been grieving since.I am a proud member of Israel’s Druse community.Even though we are fully committed to our country, we are not against the Palestinians. I support the two-state solution, but not by Barghouti’s way of killing innocent people and falsely justifying it with claims of “colonization” and “liberation.”By his own actions he chose the path of illegal violence. It is Barghouti who put himself where he belongs, behind bars for life.It is an offense to the civilized world to hear that Barghouti is pretending to be a “political prisoner.”He most certainly is not. He is a convicted murderer and the mastermind behind an organized campaign of vicious, brutal attacks against innocent civilians.He was a leader of the notorious al-Aksa Martyrs’ Brigades that was designated as a terrorist group by the United States, Canada and the EU.In those horrific years when the Palestinians chose to stage armed attacks, Barghouti’s assailants carried out shootings, bombings, knifings – murdering hundreds of civilians including women and children and wounding thousands more. And ever since, this killer of innocents has been jockeying for political power from his prison cell.Unlike America and other countries, Israel does not have capital punishment for premeditated murder, of which Barghouti was found guilty in a court of law. His own organization repeatedly sang the praises after each attack, gloating about the murders that brought catastrophe to so many Israeli families, including mine. An additional insult to humanity is that the Palestinian Authority pays reward money to the terrorists who carried out these attacks – over $300 million annually – including to the family of the man who murdered by brother.Trying to portray Barghouti as some type of Nelson Mandela is grotesquely offensive to the memory of that great man. All attempts at trying to spin a convicted killer as some kind of savior of his people simply evades the truth that this man stood behind the murder of my brother and should never be set loose to sow more tragedy that pushes peace further away.Peace will only come through negotiations, not by sending killers out to spread more destruction. My brother should have been the last one to lose his life to this senseless violence. It is my hope that nobody else in the world should share this terrible lifetime of bereavement from losing a family member to terrorism.The author lives in the town of Yarka in northern Israel. A former army officer, he is the brother of police officer Salim Barakat who was killed protecting civilians during a Palestinian terrorist attack in 2002.