Beyond definition: The huge periphery of anti-Semitism

According to a Fondapol study, 17 percent of the French public responded that the Jews are significantly responsible for anti-Semitism. Among French Muslims this percentage was much higher at 31%. 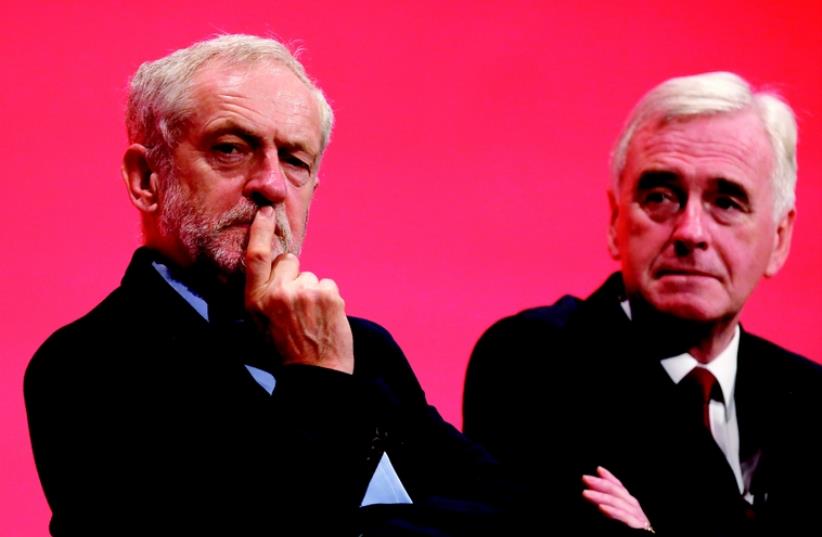 Jérémy Corbyn (à gauche)
(photo credit: REUTERS)
Advertisement
The acceptance of a working definition of anti-Semitism by the International Holocaust Remembrance Alliance (IHRA) in May 2016 was a major event in exposing this ancient hatred. For the definition to be accepted, the IHRA required the agreement of the 31 member states of the organization, among which 24 are members of the European Union. One can now analyze the statements and publications of a person or organization for anti-Semitism by comparing them to the definition and the examples of anti-Semitism mentioned in the IHRA document.One can apply this definition for instance to the frequent anti-Semitic slurs by Lady Jenny Tonge. Tonge is an independent member of the UK House of Lords and was previously an MP of the Liberal Party. Over the years, she has accused the Israel lobby of conspiracies, Israel of being responsible for suicide bombings in Iraq, as well as calling the treatment of Palestinians by Israel “the root cause of terrorism worldwide.” Tonge has also said that “Israel is not going to be there forever.” Other statements she has made include that the Jews should be “ashamed of themselves” for not stopping Israel. All of these are anti-Semitic slurs which are included in the examples of anti-Semitism accompanying the IHRA definition.Yet, when analyzing Tonge’s statements, one realizes that the definition of anti-Semitism, like any other definition, has its limits. This has two major aspects. The first is that the definition cannot list all examples of anti-Semitism. For instance, the definition says that it is anti-Semitic to draw “comparisons of contemporary Israeli policy to that of the Nazis.” It does not, however, mention comparing Israel to Islamic State (ISIS). This Islamic terror organization is currently a model for absolute evil.Jeremy Corbyn, the extreme-left leader of the British Labour Party, has indirectly made such a comparison during the official presentation of the Chakrabarti Report on Anti-Semitism, Islamophobia, and Racism in the Labour Party. It is not clear that Corbyn’s remark meets the definition of anti-Semitism. Yet former UK chief rabbi Lord Jonathan Sacks rightly called Corbyn’s statement “demonization of the highest order.”The second aspect outside the IHRA definition concerns a large number of other acts and statements on its periphery. For instance, Lady Tonge brought the Palestinian Muslim cleric Raed Salah to the British Parliament. He has propagated the libel that Jews use the blood of non-Jews to bake their Shabbat bread.If one wants to find a major organizational breeding ground of peripheral anti-Semitic actions, in addition to the core ones included in the IHRA definition, the British Labour Party is an appropriate place. This is particularly the case under Corbyn, though the problem already existed prior to his election. Ken Livingstone, when mayor of London, welcomed in 2005 Egyptian-born, Qatar-based Yusuf al-Qaradawi. This leading Sunni cleric condones suicide bombings and has both anti-Semitic and homophobic views.Inviting anti-Semites to lecture is not included in the IHRA or other definitions of anti-Semitism, yet it is a frequent phenomenon. When Alex Chalmers resigned in February as co-chair of the Oxford Union Labour Club (OULC) because of the widespread anti-Semitism there, he included such invitations as a reason for his resignation.It is difficult to find acts and statements of Corbyn which are unequivocally mentioned in the IHRA definition of anti-Semitism. Yet he is a prominent legitimizer of anti-Semites. The expanding scandal of anti-Semitism in the Labour Party is, to a substantial extent, linked to his activities in the periphery of anti-Semitism.The best known anti-Semitic acts by Corbyn involve calling Hamas and Hezbollah his “friends.” Much pressure had to be applied, for months, before he finally admitted that this was a mistake. He has also promoted inciters like Livingstone and Seamus Milne to senior positions in the party. Such acts are other examples of activities on the definition’s periphery.When MP Paul Flynn hinted at the supposed dual loyalty of a previous Jewish UK ambassador to Israel, his statement was clearly within the IHRA definition of anti-Semitism. This is included in the example of “accusing Jewish citizens of being more loyal to Israel, or the alleged priorities of Jews worldwide than to the interests of their own nations.” However, when Corbyn recently promoted Flynn to his shadow cabinet, it was an act on the periphery of anti-Semitism.Remaining silent when a major anti-Semitic slur is made is yet another act on the periphery of anti-Semitism. For example Corbyn failed to defend Jewish MP Ruth Smeeth, who was accused by a Labour member at the presentation of the Chakrabarti Report of being part of a conspiracy. One classic case of this took place in 2003, when the Greek extreme leftist Mikis Theodorakis, a well-known composer, said at a press conference that the Jews are the root of the world’s evil. Two Greek government ministers were present and remained silent.Accusing Jews of causing anti-Semitism, a typical stereotyping tactic, is also not included in the IHRA definition. According to a Fondapol study, 17 percent of the French public responded that the Jews are significantly responsible for anti-Semitism. Among French Muslims this percentage was much higher at 31%.Yet another activity at the periphery of anti-Semitism is publishing reports which whitewash large aspects of anti-Semitic behavior. One example is the recent Chakrabarti Report. Even worse is the suppression of such reports. Such suppression was carried out by the Labour National Executive Community with the full text of the Royall Report on anti-Semitism in the OULC. The Royall report was leaked only months later. The same happened with a report on anti-Semitic violence and viewpoints in Europe by the Center for Research on Anti-Semitism (CRA). It was then suppressed by the European Union Monitoring Center for Racism and Xenophobia (EUMC), who had ordered it. Later it was leaked as well.Additional international organizations must be convinced to accept the IHRA definition. At the same time, it must be realized that there are many more phenomena outside the direct borders of the definition which merit investigations in depth.