The energy in President Rivlin’s stately foyer was electric, and I found myself starting to reflect on the origins of this stellar success. 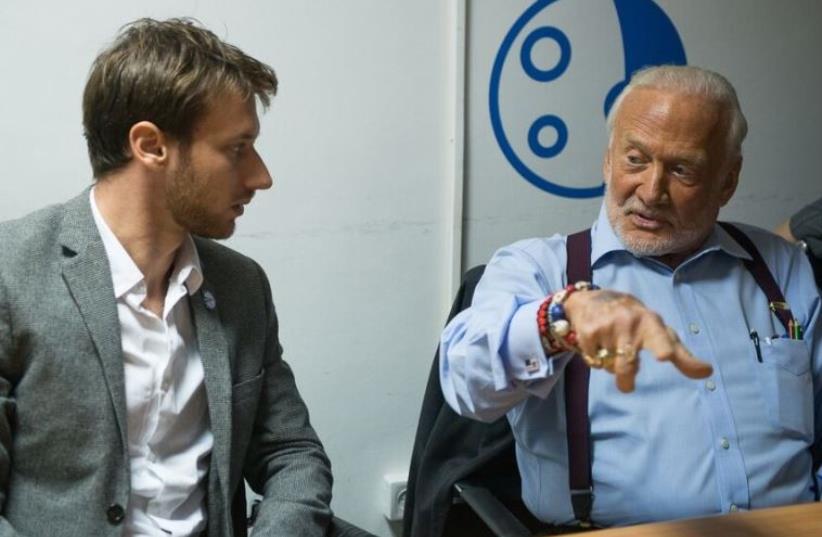 Buzz Aldrin with SpaceIL scientist Adam Green
(photo credit: ALON HADAR)
Advertisement
The stars were aligned over Jerusalem this month.Beginning with a rare lunar eclipse two weeks ago – ominously called a “Blood Moon” – the capital has played host to several events that reflected the elliptical orbit of our lives as we aspire to achieve mankind’s highest goals, even while contending with the lowest form of human behavior.On Oct 7, barely a week after the eclipse of the full moon on the first night of the Succot holiday, President Reuven Rivlin hosted a dramatic press conference to announce a monumental achievement by SpaceIL, the Israeli entrant in the Google Lunar X-Prize competition. The privately funded Israeli team had just signed a launch contract with SpaceX that will enable SpaceIL to land an unmanned spacecraft on the moon – placing the Israeli team well ahead of its rivals in a contest aimed at stimulating the kind of pioneering spirit that captured the imagination of an entire generation 50 years ago.The energy in President Rivlin’s stately foyer was electric, and I found myself starting to reflect on the origins of this stellar success.It seemed like only yesterday, but it was actually in December 2010 that I was sitting at the Globes Business Conference with my friend Doron Landau, a hi-tech entrepreneur. We were listening to three exciting young scientists who didn’t seem to know the meaning of the word “impossible.” Yariv Bash, Kfir Damari, and Yonatan Weintraub presented their dream-like plan to enter – and win – the Google Lunar X contest. They had barely three weeks to raise Google’s $50,000 registration fee.Doron and I, along with several others in that swank David Intercontinental ballroom, were infected by their enthusiasm. It was unthinkable that a team from our start-up nation would be not be among those aiming for the skies, so we determined on the spot to help raise the money they needed to position themselves on the starting line.Soon the mother of a young scientist who had been working with the founding trio of SpaceIL approached me. As the conference was filled with Israel’s business leaders, she implored me to help find funders.  “And while you’re at it,” she added, “maybe you have a nice girl for my son, the rocket scientist...”Fast forward to 2015. Bash, Damari, and Weintraub join current SpaceIL CEO Eran Privman, President Rivlin, Minister of Science Ofir Akunis, as they unveil the mock-up of the vehicle that will make Israel the fourth country (after the US Apollo landings, as well as Russian and Chinese unmanned missions) to reach this lofty goal. Senior representatives of the Google X-Prize, SpaceX, SpaceFlight (launch integration) have all journeyed to Jerusalem, underscoring the importance of the moment.Barely a week passes and one of the greatest lunar pioneers touches down in the Holy City. Apollo 11 Astronaut Buzz Aldrin, the second person to walk on the moon, shines brightly among a star-studded (no pun intended) lineup highlighting the 66th International Astronautic Conference. A youthful 85, Aldrin shares his memories and observations with razor-sharp focus. He makes a hastily scheduled visit to SpaceIL, sharing his expertise with Israel’s new generation of lunar explorers.It is the future, not past heroics, that interests him. At one of the final sessions at the conference, he dramatically reveals a t-shirt he was wearing under his dapper outfit, proclaiming Mars as the next worthy goal for mankind. Buzz deeply moved and inspired the packed auditorium – and the nationwide audience who saw his interview on TV last Friday.We share the passion of those who envision the benefits of peaceful exploration of the heavens. Art Dula, of the (Robert) Heinlein Prize Trust, a nonprofit foundation promoting the commercial uses of space, was instrumental in bringing Aldrin to Israel. Dula explained how space exploration can give hope to people in all corners of the world. He pointed to Franklin Ramón Chang Díaz, a Costa Rican-born American who is a veteran of seven space shuttle missions, tying him as the record holder for the most spaceflights to dateChang Diaz was motivated by dreams as a young boy and proved anything is possible.Perhaps we, too, can raise our vision above the daily headlines and look for hope. I am constantly reminded of Ilan Ramon, who flew high-altitude missions in my IAF Phantom squadron, wearing an astronaut’s suit, long before he was selected for NASA. On his fateful space shuttle mission, Ilan reflected the hopes of all modern Israelis when he saw the world as it looks from above, without borders or conflicts. Ilan requested John Lennon’s Imagine be played during his mission.SpaceIL is intent on inspiring Israeli youth, both Jewish and Arab, to reach for a better future.The sky’s the limit.Danny Grossman, a retired career fighter pilot for the US and Israeli air forces, is a strategic consultant for defense and diplomatic matters and a senior volunteer for SpaceIL.